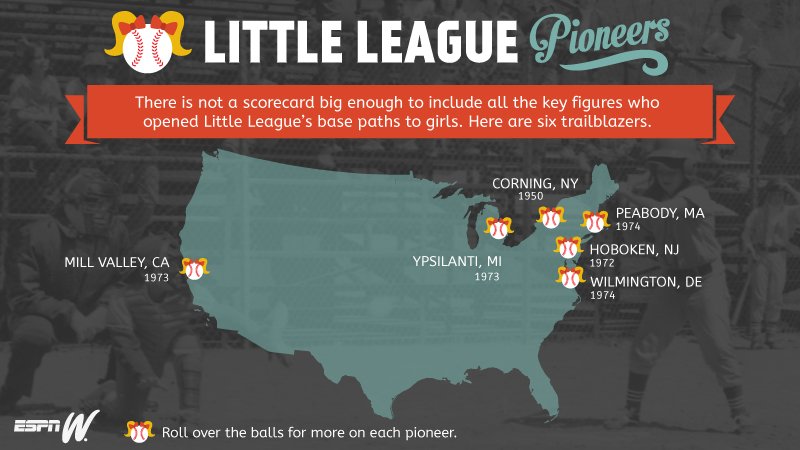 To this day, Janine Cinseruli can't pass by a Little League field without stopping her car, hopping out and checking to see if there are any girls playing.

If there are, "I'll go over and give them a high-five, tell them they have to represent, 'Work hard, do the best you can,'" she says, and then breaks into a laugh. "They look at me like, 'Who the heck are you?'"

Someone really ought to tell them some day. About the hate mail. The insults. And then, about those 16 glorious strikeouts.

Forty summers ago, Cinseruli, a 10-year-old from Peabody, Massachusetts, was one of approximately 20 girls across the United States who filed lawsuits against Little League baseball for the right to play. Or as one judge put it, to do something "as American as the hot dog and apple pie."

"I didn't think I was doing any trailblazing at 10 years old," says Cinseruli, now 51 and a chef and restaurant owner in Ocean Grove, New Jersey. "But the thing that threw me the most was when I went to sign up and a guy said, 'You can't play,' and I said, 'Why?' and he said, 'Because you're a girl.'

"I was not that smart or worldly, but I knew right then it was the most ridiculous thing I ever heard of. ... I remember I said, 'But I can play, I'm really good.'"

Her family knew that to be true. Even her three brothers admitted she was the best of the bunch. So after Cinseruli was turned away on sign-up day, her mother picked up the phone and called the local newspaper. Soon after, an attorney representing the American Civil Liberties Union took her case pro bono and filed a complaint with the Massachusetts Commission Against Discrimination, alleging, in part, that Little League's "no girls" rule violated Janine's civil rights.

And that went over about as well in Peabody as a Yankees pennant flying on Main Street.