Women's national field hockey team forward Paige Selenski spoke with reporter Morty Ain about what it was like to take it all off for ESPN The Magazine's Body Issue and her love of HGTV.

Sometimes I think I have a magnet attached to my face. I've been hit in the face a lot. At the international level, you aren't required to wear any eyewear like you are in high school, because getting hit in the face doesn't happen very often -- except for me. One, two, three, four, five -- five scars on my face left by either a stick or a ball.

It's not like I woke up one day and I had a really athletic body and ripped-up abs. I was lucky that I was naturally gifted with an athletic body, but I also put a lot of work into it. I don't stay home and do abs all day long; it just comes with running and all the things I do to stay in shape. I use my body every day for my job. We constantly put our bodies through pain. I'm not afraid to show that off.

Every day I pick up something new. Even now, even though I play at an elite level; I never see myself go stagnant as a player -- because you can always keep getting better and learning a new skill. I think that's kind of what attracted me to the sport.

People don't appreciate the speed that's required to play field hockey. It's not only the amount of endurance you need to play the sport but also quickness. I ran track in high school; I specialized in sprints. A lot of our players are really quick.

We typically run 4 to 5 miles per game. Our sports science director tracks our movements. 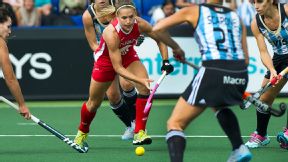 In ice hockey you can use the back of your stick; in field hockey you can't. So you have to learn how to basically use your left hand as more of your main hand to turn the stick, and your right hand is used more as a guide. It's really different.

Your hands need to be a lot quicker as you move up levels. Sometimes I'll use a tennis ball to practice my stick-handling skills. It's a lot lighter, so it teaches you how to turn the stick quick. If you can actually watch TV while you're dribbling a tennis ball, that helps with keeping your head up. You're a better player if you can keep your head up while you're dribbling. It's actually a very helpful training technique.

Anything on HGTV. It's a good channel to watch while practicing because you don't need to necessarily be fully engaged with it. And you get great home and gardening tips!

I'd say at least half of our national team are from Pennsylvania. It's kind of a field hockey hub, I'd say. On the West Coast you don't see it at all. My cousins grew up in California, and they didn't even have field hockey in their high school.

Sometimes I look down and think, "Ugh, my quads are not proportional to the rest of my body." They are very muscular. But I can squat a lot. Sometimes we rep close to 100 kilos [220 pounds], which is pretty crazy.

I can barely touch my toes. I'm not typically a very flexible person. I've always had tight hamstrings, but I found that hot yoga helped with that a lot and helped me avoid injury. The first time I did hot yoga, I was thinking, "I can't do this." But as you keep going, it gradually gets easier and easier.

We trained with the Navy Seals back in San Diego right before the London Olympics. I wish I could remember everything they had us do, but I think I blocked it out. It was awful.

"Sometimes I think I have a magnet attached to my face. I've been hit in the face a lot." Paige Selenski

After the 2016 Olympics, I'll probably get my torn labrum fixed. It was a gradual injury; it just kind of occurred. I've actually been playing on it for almost a year now. Certain moves will bother me, but for the most part I've gotten used to it. Surgery would also require a six-month recovery, and we had our Olympic qualifier in June and then the Pan Am Games in July. It would be too much time off. What's another year at this point?

I know how to push myself. My mom passed away from ovarian cancer when I was in high school, and she's the person who got me into field hockey in the first place. That drives me to compete every day and to make her proud of me. But I want to be great because I want to be great, not because of anyone else.

I'm not the fittest person. I have a sprinter-based body; I don't have a lot of endurance. In our sport, you really need to be both fast and fit on an endurance level, and I feel like I struggle to have both. As a forward, I do a lot of agility stuff -- short sprinting. My subbing rotations are a little shorter than in the midfield, so my sprinting actions are a lot quicker -- they don't sprint as fast, so they can last a little bit longer on the field.

A teammate and I have joked that we're going to try out for the bobsled team. But it's not really a joke. We're both really quick. We may give it a shot. We'll see ... 2018. I think maybe I can give them a run for their money. I've actually already scoped out their scoring table, so ...