Arriving 90 seconds late for a meeting is hardly a crime. But in coach Edniesha Curry's world, every moment counts, and timing is everything. When she enters the room, Curry apologizes profusely for arriving a little over a minute late to our interview.

It's pointless to tell her that it's not a big deal, because everything is a big deal when it comes to basketball and her career.

The significance of this accomplishment is not lost on Curry.

"It's because of women like Bernadette Mattox and Stephanie Ready that I have been given this opportunity," Curry says. "I watched with pride and awe as Bernadette took the sideline in Kentucky, I hope that girls and women see me on the sidelines [at Maine] and realize that they too can coach men's basketball. Their gender shouldn't be a limitation."

Just as Curry acknowledges the historical significance of her latest accomplishment, it's impossible for others to ignore all of the hard work that she's put in. The Los Angeles native picked up a basketball at age 12 of her own volition and never looked back. With the support of her parents she dedicated her time and energy to the sport and earned a basketball scholarship at Cal State Northridge, where she played from 1998 to 2000. She is still the school's all-time leader in 3-pointers (168). Curry went on to play for the University of Oregon, where she helped the team win its 2002 WNIT championship and earned an All-Pac-10 honorable mention. 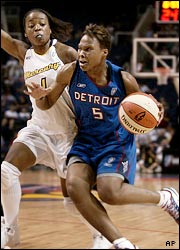 Curry went pro in 2002, when the Charlotte Sting (the team folded in 2007) drafted her in the third round with the 41st pick overall. Curry went on to play in the WNBA for four years, suiting up for the Phoenix Mercury and Los Angeles Sparks. She also put in time on the international circuit playing in Athens and Thessaloniki, Greece, Israel, Hungary and Poland.

After hanging up her jersey in 2009, Curry jumped full time into coaching and spent several years developing players in Vietnam, China, Israel and Palestine. At various points in her international coaching career, she was in charge of entire basketball programs -- she led Jr. NBA skills clinics, participated in the Nike pre-draft Chicago school and was the head coach and basketball skill development trainer with a team in Taiyuan, China.

Since returning to the United States, her grind hasn't stopped. She's worked as an assistant basketball player development coach for the Maine women's basketball team, a post she took on in 2015, conducted camps for the Atlanta Hawks and Dream, and is a two-time participant in the NBA's Assistant Coaches Program (a program that trains attendees on how to become pro-level coaches). Through each step of her journey, she's soaked up knowledge and passed it on to her players.

Curry is a basketball savant. She studies film and live games for 12 hours at a time, just for fun. Curry produces comprehensive scouting reports and can talk and teach circles around many of her accomplished colleagues. She's up until the wee hours of the morning perfecting her craft, making sure that she can pass the best down to her athletes.

"I think your ability to impact your players' lives as a coach, no matter what level or gender, is determined by drive and focus. It's my job to get players to reach their goals," Curry says. "Their success is my success."

Curry isn't the only one who can speak to her work ethic. Rushia Brown, a former WNBA player, founder of the Women's Professional Basketball Alumnae association and newly appointed manager of player programs and franchise development for the WNBA's Las Vegas Aces, also heralds Curry's dedication to the sport.

"Edniesha is a true student of the game. I can't think of a more deserving person. The amount of time she dedicates to the game of basketball is incredible and it's paying off," notes Brown.

Curry's former Sparks teammate, six-time WNBA All-Star Chamique Holdsclaw, thinks she is a natural for the job. "When we played together she was like a player-coach," Holdsclaw says. "She could just see things that other people couldn't. She was made to coach high-level basketball."

"Before Coach Barron gave me a 'yes,' I pretty much had 14 years of 'nos.' Unfortunately, I got a lot of rejection on the women's side of the game. I was told I couldn't coach. That I didn't have the right coaching style or the right look or social media presence," Curry says.

"It was so frustrating but I refused to change who I was -- I didn't want to fit some mold that came unnaturally to me. So instead of taking the traditional route, I made my own path. It was difficult coaching away from my family in countries where I didn't speak the language, but I got to learn about who I am, and how much I love the game of basketball."

Barron, who was formerly head coach for the women's team, initially hired Curry to work with that squad. When he was named the head coach of the men's team in March 2018, he knew he wanted to bring Curry with him. "She is a gifted skill instructor and motivator and will bring tremendous energy to our program. Coach Eddie (her nickname) has an infectious personality and enthusiasm which I know will result in greater productivity with our players."

While the magnitude of having a woman coach Division I men's basketball is not lost on Barron, he wants it to be known that he hired Curry for her talents. "I hired Curry on her merits. That's all. I hired her based on her qualifications and fit for the program. Hopefully one day that's the standard on which all coaching decisions are made, not gender."

Curry is fully aware that all eyes will be on her when she steps onto the sidelines during her first men's game.

"I know the expectations that everyone else has of me, but those aren't my expectations. I expect to be the best coach on the University of Maine's men's basketball staff," Curry says. "My goal is to win and to do so without losing my voice or who I am. I want to show women and men that if you're a damn good coach, you can be a damn good coach on the men's or women's side of the ball."

Cecelia Townes is a proud graduate of UCLA School of Law and the Real HU in Washington, D.C. She used to ball so hard on the tennis court. Now she serves it up on her blog, GladiatHers.com, and with student-athletes with Beyond the Game LLC. Follow Cecelia on Twitter & Instagram @SportyEsquire