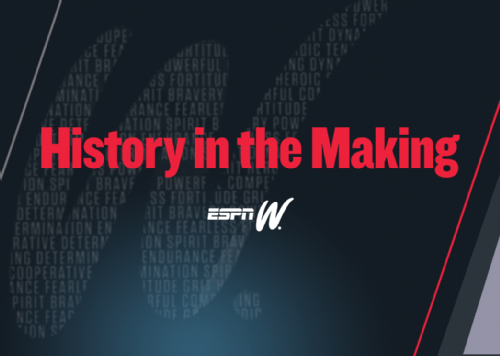 Stream espnW's special "History in the Making," presented by SportsCenter on Watch ESPN.

Throughout Women's History Month, espnW will present "History in the Making," a collection of stories recognizing the voices, achievements and contributions of these contemporary sports figures and more. "History in the Making" will highlight the notable women and historic moments of the past year across the sports landscape. It also will explore how their voices are raising awareness of racial and social justice causes and amplifying the need for monumental change. And it will speak to the idea that while yes, some obstacles have been overcome, questions remain as to why it has taken so long to dismantle systemic impediments.

Stanford coach Tara VanDerveer, her decades-long love affair with basketball and her fight for equality

By Tara VanDerveer, as told to Elizabeth Merrill

She learned the three-player weave in fourth grade and has been devoted to basketball ever since. As Stanford aims for its third national title, coach Tara VanDerveer reflects on her lifelong love of basketball and her never-ending fight for equality.

A Love Letter to Black Women

In honor of Women's History Month, The Undefeated presents its March special, "A Love Letter to Black Women." Now streaming exclusively on ESPN+, the special amplifies and acknowledges the beauty and resilience of Black women in sports who create history every day.

Breonna Taylor and the ongoing fight for more than her name

Breonna Taylor was killed by police on March 13, 2020. Black women have led the fight for recognition, empathy and justice in Taylor's honor. Black women have long been leading social and racial-justice change. So why is it, then, that Black women, like Taylor, are continually and systemically diminished, or erased altogether? As Katie Barnes writes, it's on us to answer that question -- and reverse the trend.

• In our letter series, Black women athletes, including Ibtihaj Muhammad and Natasha Cloud, reflect on how Taylor's killing ignited their quest for change.

'You're going to listen to what we have to say'

• Listen to the podcast

Two decades after the film "Blue Crush," with Hollywood imagining women paddling out in the most revered event in pro surfing, ESPN's Alyssa Roenigk tells the story of how real-life women competed in a Championship Tour event at Pipeline.

Who are the best players in women's soccer right now? Introducing the FC Women's Rank, an ESPN FC and espnW celebration of the sport's elite. The U.S. women feature heavily in the rank, though there's tough competition all over the globe for top honors.

A virus left Tyler Wright bedridden for a year. Now, as Alyssa Roenigk writes, the two-time world surfing champion is making history in and out of the water.

Boxing, MMA and her own PPV: Claressa Shields bets big on herself in 2021

Claressa Shields wasn't fighting, wasn't getting the exposure and wanted more for women's boxing. That's when she took matters into her own hands. As Michael Rothstein writes, in an all-women's boxing PPV, Shields defeated Marie-Eve Dicaire by unanimous decision to become the first boxer in the four-belt era (since 2004), male or female, to be an undisputed champion in two divisions.

By Jennifer King, as told to Ericka N. Goodman-Hughey

"... I need to help out the next generation of women coaches. I'll be able to answer the questions they may have, I'll provide guidance. I'll at least try. I want to make that connection with them because they're on deck to go next. Me being here is an example. It's an example of the opportunity they could have one day."

As ESPN's Sarah Spain writes, every woman who has worked her way up to the highest levels of a male-dominated business has been overqualified, tough as nails and afraid of nothing save perhaps the fragility of men standing in the way of her success one more time. Things got a little easier for those women when, on Nov. 13, 2020, Kim Ng broke a long-standing glass ceiling.

As Katie Barnes writes, basketball's best prospect in decades couldn't be derailed by a devastating knee injury or a pandemic. The next step in Fudd's ascension: teaming with Paige Bueckers at UConn.

Laughter Permitted with Julie Foudy is a fun, thoughtful, candid conversation with trailblazers in sports about the joy/chaos of life and sports. Find more episodes here or at Apple podcasts or wherever you get your podcasts.

• Sarah Thomas, the first woman to officiate a Super Bowl, discusses the highs and lows of her career and the behind-the-scene stories of Super Bowl LV.

• Legendary softball pitcher and two-time Olympic medalist Cat Osterman talks about how a silver medal at the 2008 Olympics impacted her life and why she decided to come out of retirement for the 2020 Olympics.

With Claire Williams gone, what is next for women in Formula One?

Is Claire Williams a trailblazer? In reality, yes, one of two. In F1's 70-year history, Monisha Kaltenborn -- who was in charge at Sauber between 2010 and 2017 -- is the only other team boss who is a woman. As Niamh Lewis writes, their positions in a historically male-dominant sport proved to the world that women belong there and can lead and succeed.

• ESPN survey: The women who power Formula One

By Taneka Mackey, as told to Charlotte Gibson

Taneka Mackey is the first Bahamian woman and the only Black woman caddie on the LPGA Tour full time.

The Undefeated: Jennifer King: A pioneer for female coaches in the NFL

Katie Barnes: Breonna Taylor and the ongoing fight for more than her name

The former competitive golfer discusses managing her multiple sclerosis while on tour and being the first but not the last. She wants to represent the Bahamas, inspire the next generation and advocate for more diversity on the golf course.

"Growing up in Nassau, Bahamas, I heard other kids, and even adults joke about how I was playing a white person's sport or a rich person's sport. That wasn't my reality. My parents provided me what I needed to play a sport that I was good at. I shrugged it off and kept playing."

Mariah Stackhouse, the LPGA's only Black full-time player: 'I have the opportunity to inspire'

"I look at athletes that have come before me in other sports and seeing them excel, what that meant to me, even if I don't play that sport," Mariah Stackhouse says. "I think what Serena Williams means to me. Just understanding what it means seeing someone who looks like you playing a professional sport you hadn't considered. It increases the spaces that you consider seeing yourself in. And that's the goal."

As ESPN's Kathleen McNamee writes, Deena Rahman was one of the first women to be paid to play soccer in Europe, with Fulham in 2000, and has played for two national teams (England and Bahrain). She now runs her own academy and is on a mission, alongside those at the nonprofit organization Equal Playing Field, to show girls and women that there's no challenge they can't take on.

How Black gymnasts are being seen and heard, and finding their moment

Five of the top collegiate gymnasts in the country -- Trinity Thomas, Lynnzee Brown, Margzetta Frazier, Kiya Johnson and Nya Reed -- sat down with The Undefeated's Lonnae O'Neal to talk about representation and recognition as Black athletes in a sport that's often been predominantly white.

That's What She Said

Sarah Spain profiles guests from the world of sports, comedy, music and beyond to share the stories of their lives and their journeys to success.

Ada Hegerberg's opt-out has been compared to the USWNT's prolonged fight for equal pay. Like so many women before her, there's a fear that asking for more will make her seem ungrateful, disruptive or -- worst of them all -- unlikable. Sarah Spain writes that the moment a woman asks for more is the moment she prioritizes what she needs over the opinion others have of her.

• Watch "My Name is Ada Hegerberg" on ESPN+

Natasha Jonas is ready for another shot at Katie Taylor

Nearly nine years after she met Katie Taylor and made history as the first British woman to box at the Olympics, Natasha Jonas tells ESPN's Kathleen McNamee about her upbringing, football being her first love, and how she rose to become a boxing sensation.

Fran Kirby's ultimate battle: How the Chelsea women's star beat heart disease to get back to the top

Kirby's mindset in 2021 is informed by how, in 2020, her career was nearly taken away. The Chelsea and England star talks to ESPN's Tom Hamilton about her journey.

• COVID-19: Meet the women who sacrificed their sport to work on the frontlines

ESPN's Kimberley A. Martin, Chiney Ogwumike and Charly Arnolt discuss the biggest sports stories, their lives and culture. Catch the new episodes wherever you get your podcasts.

Alice Dearing: Team GB's trailblazing swimmer breaking barriers in and outside the pool

Alice Dearing tells ESPN about her amazing journey as she sets her sights on becoming the first Black female swimmer for Team GB at this summer's Olympic Games.