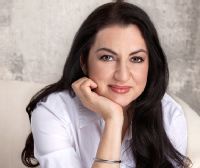 Safina Uberoi is an award-winning Indian-Australian filmmaker. Her best known documentary is the autobiographical "My Mother India," which won 11 major awards including the Australian Film Critics Circle Award for best Australian documentary and the Rouben Mamoullian Award. Uberoi's most recent documentary, "A Good Man" -- about a farmer and his quadriplegic wife -- has also won a number of awards and was acclaimed among the top 10 films at IDFA, the world’s largest documentary festival in Amsterdam.

Safina directed a film on British Asian writer and actress Meera Syal for the prestigious BBC series "Who Do You Think You Are," which was nominated for a BAFTA and Grierson Award and won an Indie Award. Her work in the U.S. includes "1800 India" for PBS; the film won a Gold Eagle Award for excellence in journalism.
Safina has taught film and television at national institutions in Australia and India. She is a former Board Member of the Australia India Council.

My mother is Australian and my father is Indian. My mother was like a proper Australian and quite sporty but I grew up in India, where most of the girls around me did not play sport, especially as they grew older. So I always ended up playing with the boys.

When I started researching women's soccer, I found many of the young women on the team, even in Australia, had honed their skills playing with the boys. I was fascinated by how these girls had pioneered their sport, pushing into a male arena and challenging stereotypes.

And then there was Lisa.

We had been told about many good players in the Australia team, who were also, I suspect 'good' girls. No one mentioned Lisa, except of course all the internet media, which still carried references of the various scandals she had been involved in.

Then we happened to go out to a match where she was playing. I went with my brother-in-law, who is a sound recordist and has a great gut instinct for documentary characters. And we saw this rocket shoot out of the benches. We were both like, "Who is THAT???" It was Lisa. We spoke to her for two minutes after the game and were convinced she was our girl!

Why was it so important for you to tell this story?

Lisa is a rebel and can be very disruptive. But she has a genuine passion for the game, and there is a real integrity in her devotion to it. The tension between her edgy individualism and the demands of a team sport made her a very interesting character to follow.

I was also very inspired by Lisa. She is an example of the triumph of the human spirit against the odds. She came form a small town -- Freemantle -- which is a seven-hour flight away from the center of sports funding in Sydney. There were no leagues to help her to professionalize, no decent women's teams in her area. She just roughed it out with the boys on the street. Her parents were Portuguese and Italian migrants and loved soccer, but they were not expecting a girl to take it seriously.

Everything Lisa has achieved has been through her own grit and iron determination. I was blown away by that.

What excited you most about this project?

It is always exciting to be close to genius. To observe a disobedient one at close quarters is even more fascinating!

But seriously, I was really moved by Lisa's story. She had this immense personal drive and love of the game, but the very elements which made her dynamic on the field were also the ones that got her into trouble in her life.

As a woman working in a very male area of filmmaking, I could really feel Lisa's battle.

She pushed through the pain of her father's death and still played, brilliantly, for her country. But at the end, Lisa had nothing left, emotionally, for press interviews and misbehaved. Well, I can understand that!

Then the press hounded her over some really innocuous pictures she posted on her Facebook page. She had been at a hens night and fooled around with a three-foot-long inflatable penis. Hardly a serious sexual offense, but the press had a feeding frenzy over the "scandal." Lisa was so angry that her first reaction was to post more pictures -- this time of herself pretending to have sex with a stone sculpture. Frankly I thought the whole incident was harmless and hilarious. But of course the consequences for Lisa, as the sports establishment came down on her, were far from funny.

Then she had this awful injury at the Asian Cup where she smashed her ankle. Lisa stared into the ugly face of early retirement from the game, but she has such courage. During the filming we watched her fight her way through the pain, back to fitness and onto the Australian team.

The trouble is that this very determination also gets her into trouble. We were just finishing the film when there was a major incident where Lisa refused to join in some of the team activities, preferring to continue her training separately. I can totally understand the coach's frustration -- he had a team to look after -- but I also feel deeply for Lisa. When she was suspended from the team (yet again!) just a month before the World Cup, I knew what a body blow it was for her.

And yet here she is, back on the Australian team and all set to play the World Cup. That girl Lisa- she really is unstoppable!