Coach Rob Mendez was born without arms or legs, and still was determined to become a head football coach. Here, as told to ESPN senior writer Wayne Drehs, the recipient of the Jimmy V Award for Perseverance shares his thank you letter to the game that changed his life.

I don't know how to say thank you. I don't know where to begin. The game has given me a life that nobody believes a man in a wheelchair born without arms and legs could have. Together, we've proved all of them wrong. And it's only the beginning.

Do you remember how this all started? How we first played catch? I'd lie on my back on the living room floor, with that squishy red mini football tucked under my neck. Then I'd roll the ball off my neck, onto my right shoulder and then, like a pinball flipper, I'd flick my shoulder and pop the ball in the air before catching it under my neck and starting it all over again. For hours I would do that while watching Steve Young, Jerry Rice and my other heroes on the 49ers.

People were always so mesmerized by that. Especially when I popped the ball in the air in a perfect spiral. But I didn't know any different. I loved the game. I wanted to play catch. So I figured out a way to do it.

And really, that's been the story of my life. People feel sorry for me, look down on me and wonder what life must be like without arms and legs. But what they don't realize is that it's the only life I know. I have no idea what it feels like to throw a spiral or sprint as fast as you can. So how can I know what I'm missing?

Instead, it's the disappointment of being left out that has always gotten to me. I will never forget the first day of football practice my freshman year of high school. All my boys were out there on the field, learning the game that I loved. And I just sat in my wheelchair on the other side of the fence, aching to be part of the team. One of the coaches saw me and waved me down. They asked me to be a manager. You should have seen the smile on my face when they gave me my first jersey.

But I wanted more. I was drawn to the game not because of the bone-crushing hits or jaw-dropping athleticism. It was the X's and O's, the back-and-forth chess match where one sideline tries to outsmart the other. That's why I loved it so much. When I couldn't play with my friends in the street growing up, I would lay back in my living room, ask my sister to tuck our game controller under my chin and play Madden like any other kid. I loved outsmarting the computer or anybody who tried to beat me. In high school we had a 30-team Madden tournament. I finished second.

While most everyone else watches the ball when they see a football game, my eyes dart everywhere else. The blocking assignments. The route tree for the receivers. The safety reads. Just the other day, I was having lunch at a restaurant when highlights from the first Super Bowl came on. I was blown away by how simple yet effective the offense was back then. The people I was with couldn't understand why I checked out of our conversation for some old football game.

But that's why I love the game. While working as a manager, one of the coaches suggested I become an announcer for the team. My dad thought it was a great way for me to be around the game. I loved it, but it wasn't exactly easy getting my wheelchair up and down the bleachers of high school football stadiums. And it still felt like something was missing.

That's when it hit me: coaching. It was perfect. I wouldn't need arms and legs. I didn't have to run, tackle or pass. There were amazing young athletes to do that work. I needed my football-obsessed mind. And my ability to communicate and inspire.

I glued myself to our coaches, learning everything I could from them. I came to realize that while I might never have played the game, I knew more about it than most. My message resonated with the kids. And yes, they looked at me, a man without arms and legs, and gave everything they had on the field.

I built my entire life around football. I had various part-time jobs during and after high school. But if they conflicted with the football schedule, I quit. My parents didn't quite understand. But I wanted to be a head coach.

Last year, after I had spent 12 years as an assistant, someone finally trusted me with my own team: the junior varsity squad at Prospect High School in Saratoga, California. Our team went 8-2 and finished second in the conference. We lost the conference championship game in a 3-0 heartbreaker. But more important to me was what happened off the field and on the sidelines. Those kids gave me a purpose. A feeling that I not only belonged but that I was their leader. Most everywhere I go, people look down on me. They stare at me. They feel pity. On the football field, with my team by my side, they didn't see me as a man in a wheelchair. They saw their football coach, a man who believed in them, who taught them about the importance of school, family and living your life the right way. And they all bought in.

There was something in the way they would look up to me, with this sort of magical look in their eye, waiting for me to say the right words to inspire them. No one had ever looked at me like that before. Rarely had anyone looked to me to be the one to help them.

ESPN followed our season and told my story. When the project began, I hated the attention. I had less than zero interest in being some sort of inspiration or poster boy for overcoming adversity. I just wanted to be a football coach. Coach Mendez. Plain and simple.

But after the story ran, the response forever changed the way I look at my life. That's when I realized the power of our relationship, football. You and me.

My social media following doubled and tripled. My inbox filled up with emails from around the country with strangers telling me how much my story had inspired them. Then there were the handwritten letters, many from elementary school students, telling me how proud they are of me.

It's all become a whirlwind. And I don't know how to handle it all. A few years ago, I was a stranger in a wheelchair, a young man who tried to live with his head held high and a smile on his face. Then I was a head football coach, trying to prove that I could lead a group of young men as well as anyone who was born with arms and legs. Now people look at me as an inspiration.

Now I have the same agent as retired NFL receiver Donald Driver. People ask me to come speak at their college or work meeting. I'm on the red carpet at the Tribeca Film Festival. At parties with Gavin DeGraw and Tristan Thompson. In July, I will receive the Jimmy V Award for Perseverance at the ESPYS. Are you kidding me? Jimmy V was an inspiration to me. I know every word of his ESPYS speech. And now I'm going to receive this award in his honor. I can't even put into words how that warms my heart. I can only say thank you, football.

I know the game isn't perfect. I know it has its critics. But when I think about everything that has happened in my first year as a head football coach -- and the bright future that lies ahead -- I know I have you to thank.

You've taught me and so many others that anything is truly possible. Two years ago, I rolled out of a church service dejected, out of work, wondering if I'd ever get a chance to become a head football coach. I remember finding a quiet spot near a bush and just asking God to give me a sign that I wasn't wasting my life, that there was a place for me in football. A few days later, I got the phone call for the interview at Prospect. And now all this has happened.

I can tell you it's only the beginning. On the field, I want to help my team win the championship that eluded us last year. I had offers to become a head varsity coach at other schools, but I know at Prospect we have unfinished business. After that, who knows? Earlier this month, I spent a few days with Sean McVay at Los Angeles Rams minicamp. That lit a new fire for me. I know there's a minority coaching intern program for the NFL. Maybe that's something I can pursue. 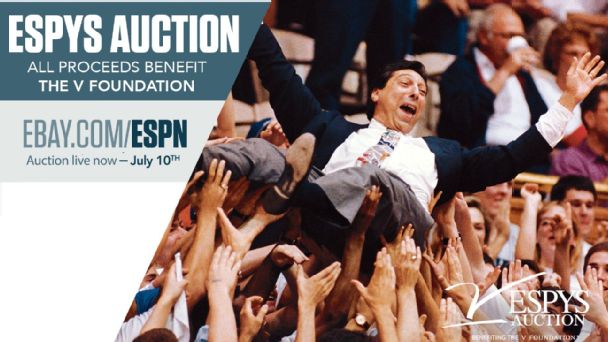 Want the chance to win an incredible experience? Want to help the V Foundation fight cancer? Here's your chance with the ESPYS Auction. Bid to win
• More ESPYS
• Donate to the V Foundation

I know I want to push myself to be the best coach I can be. I've never given up at anything. I'm not about to now. And off the field, I want to keep inspiring people to chase their dreams, to never give up. As I like to say, "Who Says I Can't?"

Twenty years down the road, I hope to be an established, respected football coach. Not a great coach for a man without arms and legs, but a great coach, period. I hope to settle down with a wife. Maybe a couple of kids. A small house.

I'm already preparing myself for adversity. I know it will come. Dynamics change, people evolve and all of a sudden the football doesn't bounce your way. I get it. But whenever that happens, I won't quit. I never quit before all this. I know there are so many watching me and cheering for me. It's a responsibility I take seriously. So don't worry, football, I'm not going anywhere.

The other day I was thinking what my life would be like without you. I guess I'd probably be a manager at some store, probably nowhere near as fulfilled or happy as I am now. To put it simply, I'd be idling in life. But with you around every day, there is excitement and challenge. Every day when school ends, I'm jacked for practice. That feeling has never gone away. And I hope it never does. For all of this, football, I say thank you. From those first days flicking you up and down on my living room floor until now, you've helped me believe in myself and spread that confidence to others. For me, there has been no greater gift.