NEW ORLEANS -- It is a subtle distinction, but one that is important to San Jose SaberCats head coach Darren Arbet. He is a football coach. Period. Not an African-American coach or a black coach. Just a football coach.

"My parents taught me that the color of someone's skin doesn't matter," Arbet said. "I always wanted people to judge me as they would any other football coach."

Arbet is the only black coach to win an Arena League title and he can win his third ring on Sunday when San Jose plays Columbus in ArenaBowl XXI (ABC, 3 p.m. ET). With Tony Dungy becoming the first black coach to win a Super Bowl in February, the comparison between Arbet and Dungy is only natural. Both, after all, have a hands off and cerebral approach to coaching. 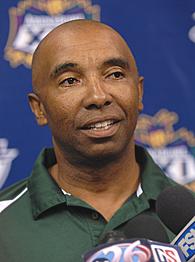 "They are quiet leaders who players respect," said former New York Jets running back Clark Gaines, who now works for both the AFL and NFL players associations. "Darren and Tony don't really have to motivate players because players want to play for them so much."

Arbet, who played two seasons in the AFL at fullback and linebacker before a wrist injury ended his career, began his coaching career in 1990 at his alma mater, Sacramento State, where he was on staff with current Oakland Raiders offensive coordinator Greg Knapp.

Arbet spent 1998 in Albany as an assistant defensive coordinator under Columbus head coach Doug Kay, his counterpart in the ArenaBowl Sunday and Kay joked in a conference call this week that Arbet never cut his hair right and was always late for meetings. But Kay ate breakfast with Arbet every morning at an Albany diner and Arbet soon learned that there is always more to do in coaching.

"I can remember turning in my first scouting report to Doug Kay and he ripped it up," Arbet said. "The next time I put together this incredibly detailed scouting report and Kay said 'Yeah, now we need to plan practice.'"

Added Kay, "You could tell from the beginning that Arbet wanted to be one of the best coaches. He asked me if I could help him get a job and I told him no, but if the team won enough games he might receive an opportunity."

That opportunity came when the SaberCats hired Arbet to be their second head coach on Jan. 13, 1999. Arbet, 44, wanted to build a strong system in San Jose and the results speak for themselves. Since 2000, the SaberCats have won two ArenaBowls (2002, 2004), the most regular-season games of any team and average almost 12 wins a year. Arbet, who has twice been named AFL coach of the year (2000, 2002), refers to his four coordinators as head coaches.

"People don't believe me, but its true," Arbet said.

His confidence in his assistant coaches showed on Thursday. Scheduled to arrive on Wednesday, San Jose did not arrive in New Orleans until Thursday night after their plane experienced mechanical problems.

Still, Arbet, San Jose defensive lineman George Williams and San Jose's director of communications Phil Simon squeezed into a five-person plane and arrived in New Orleans on Wednesday night so Arbet could attend an AFL-sponsored charity event on Thursday. The SaberCats practiced Thursday in San Jose without Arbet before departing for New Orleans

"Arbet is the type of coach who leaves the X's and O's to the coordinators. He focuses on big-picture decisions and where our team is mentally," said SaberCats QB Mark Grieb.

Arbet's goals are simple -- have the hardest work ethic of any team in the AFL and win the turnover battle in every game. Arbet is also about doing things the right way. If the SaberCats mess up a drill in practice, he will make them do it again. San Jose runs its practices at full speed. The SaberCats might run as many plays in a two-hour practice as they do in a game.

"He is not a coach that will say too much during the game, but he is really a coach that will get on you in practice if you are not doing something correctly," said Williams. "One of the things that Darren does so well is he treats players like men. As players we don't just feel like players, we feel that we are part of the staff."