Mark Cuban has harangued NBA officials, served Blizzards at Dairy Queen and played the role of Benefactor on national television.

Now the 49-year-old billionaire owner of the Dallas Mavericks is ready to step full force into mixed martial arts -- both as a promoter of big-budget events and the driving influence behind a fledgling television network he intends to make the premiere destination for MMA-related programming.

Dominated by the wildly popular Ultimate Fighting Championship, which, according to SpikeTV, managed to attract more young men this past Saturday to the tape-delayed broadcast from London, England, than any college football game or NASCAR race could the same day, it's clear the combat sport has successfully grappled its way into living rooms across America. 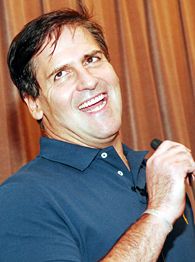 "I think the UFC is a unique property that has a unique approach," Cuban told Sherdog.com during an e-mail interview. "I think Dana White and the Fertittas have done a remarkable job. [But] their model can only support a finite number of athletes, which leaves the door open for us to coexist.

"We certainly won't be a minor league feeder for them. But I think we would compete minimally for top-end free agents only because UFC locks them up to exclusive deals. I think some fighters would prefer our open approach."

The initial plan, as Cuban described it, was to pool quality regional MMA organizations such as Las Vegas-based Steele Cage Promotions, which in turn would promote often enough to provide regular programming for HDNet's "Friday Fight Night" series.

"What he told us is that he's directing all his efforts to have the No. 1 mixed martial arts TV network," retired boxing referee turned fight promoter Richard Steele said after meeting with Cuban for several hours in Las Vegas.

Currently available in 6 million homes, HDNet was launched by Cuban in 2001. While a partnership with HDNet would aid promoters like Steele Cage and the International Fight League by providing them an independent television carrier, Cuban said his various businesses figure to benefit greatly from a strong connection with MMA.

Cuban is also rumored to be in serious discussions with WWE's Vince and Linda McMahon, who reportedly want in on MMA as well.

The ability to market across multiple platforms -- promoting at the American Airlines Center in Dallas, an arena Cuban co-owns; creating DVD content for Magnolia Home Entertainment; broadcasting live events in his movie theaters; and of course producing events for HDNet, which is growing 5 percent a month, according to Cuban, in a rapidly expanding HD television market -- led Cuban to say that when he chooses to promote his own events, he won't end up like other deep-pocketed wide-eyed promoters who failed to see a return on their investment.

"We want to keep things good for the athletes but we also have to be financially responsible for what we're doing with our promoters," said Guy Mezger, whom Cuban tasked with overseeing talent development and matchmaking duties for MMA on HDNet. "We can't expect some of our promoters to sit here and drop $50,000 for an athlete when they have a show that's not bringing in enough money to justify that."

It shouldn't surprise anyone that's followed Cuban's tenure as owner of the Mavericks that he plans to ignore his frugal grain if he thinks spending money will improve his product.

"We certainly won't need to blow through $40 million, although it's not an investment level I would be unwilling to make," Cuban conceded, alluding to the hefty sum the UFC spent before it started to see some money coming back.

"All these opportunities come," the retired fighter continued. "When he first approached me with the idea of doing his own deal and putting this thing on, it was a much smaller idea. But as he gets going, he has tremendous energy. I'm not kidding you, I don't know when this guy sleeps."

For MMA fans, Cuban's vigor should yield more fight programming in the near future, including the expectation of live cards on HDNet or pay-per-view, as well as a first-of-its-kind news program focusing on the sport: "Inside MMA," which debuts Friday.

"Think 'Inside the NFL' on HBO," Cuban said.

Fanning the flames of his reputation as a player's owner, Cuban indicated he plans on "making a significant investment in MMA with the goal of promoting it as a professional sport with professional athletes."

"There is no reason that a fighter in an undercard match should be treated any differently than how I treat our players on the Mavs," he said. "I don't think MMA professional athletes get treated with the respect and professionalism they deserve and that has created an opportunity for me and HDNet."

When asked if the perceived lack of respect extends all the way to the biggest promoters in the sport, including UFC, Cuban took dead aim at MMA's promotional structure by comparing it to professional wrestling.

"The UFC has done an amazing job of building a business," he said. "They deserve a ton of credit. But from my perspective, they've really taken a page from the WWE. Not that it's scripted; it's not. Rather, the events are overproduced. The attention is taken away from the athletes and placed on the bigger brands."

"The UFC is a great company doing great business and they will be around for a long time," he continued, "but we are going to learn from them and learn from my experiences in the NBA and try to take the best of both worlds to the benefit of the fans and the athletes involved."

Planning upwards of 24 events in 2008, both in conjunction with partner promoters and on his own, Cuban appears to be diving head first into a very competitive fighter market.

"I think he could be a major player," Steele said. "He has the TV and he has the drive to try and boost the company as far as making it visible in the whole country. This guy can do it if he gets behind something."

When Steele's International Fighting Organization debuted on HDNet last Friday it became one of the few promotions in MMA to feature an independent broadcast crew calling the action. With most MMA organizations acting as both promoter and television producer, questions followed regarding the objectivity of in-house MMA broadcast crews.

HDNet's partnership with promoters would seem to provide a filter between what the audience hears from announcers, and what the promotion wants them to hear.

That, said IFO CEO Steve Oshins, is an important component of what HDNet brings to his or any other MMA show.

"The key to the future of MMA in my opinion is creating a foundation for young fighters to turn professional with confidence they can make a living and take care of their families," Cuban said.

Josh Gross is the editor of Sherdog.com.