And I don't mean crown molding or laminate flooring. No, ceilings and floors are oft-used terms in the fantasy baseball lexicon, meant to describe a player's best- and worst-case statistical scenarios.

Any experienced fantasy baseball owner knows how projections, and the rankings that result from them, work. They set specific, median-level expectations for each player, and are largely the basis for most of our drafting decisions.

But the flaw in basic projections and rankings -- ones quickly pulled from a site without second thought -- is complete ignorance of player volatility; they put every player's skills, playing time and health into the proverbial blender and hit puree. They ignore that most players' best- and worst-case scenarios differ, so if you do not do the homework determining where they reside, you're doing yourself a disservice. 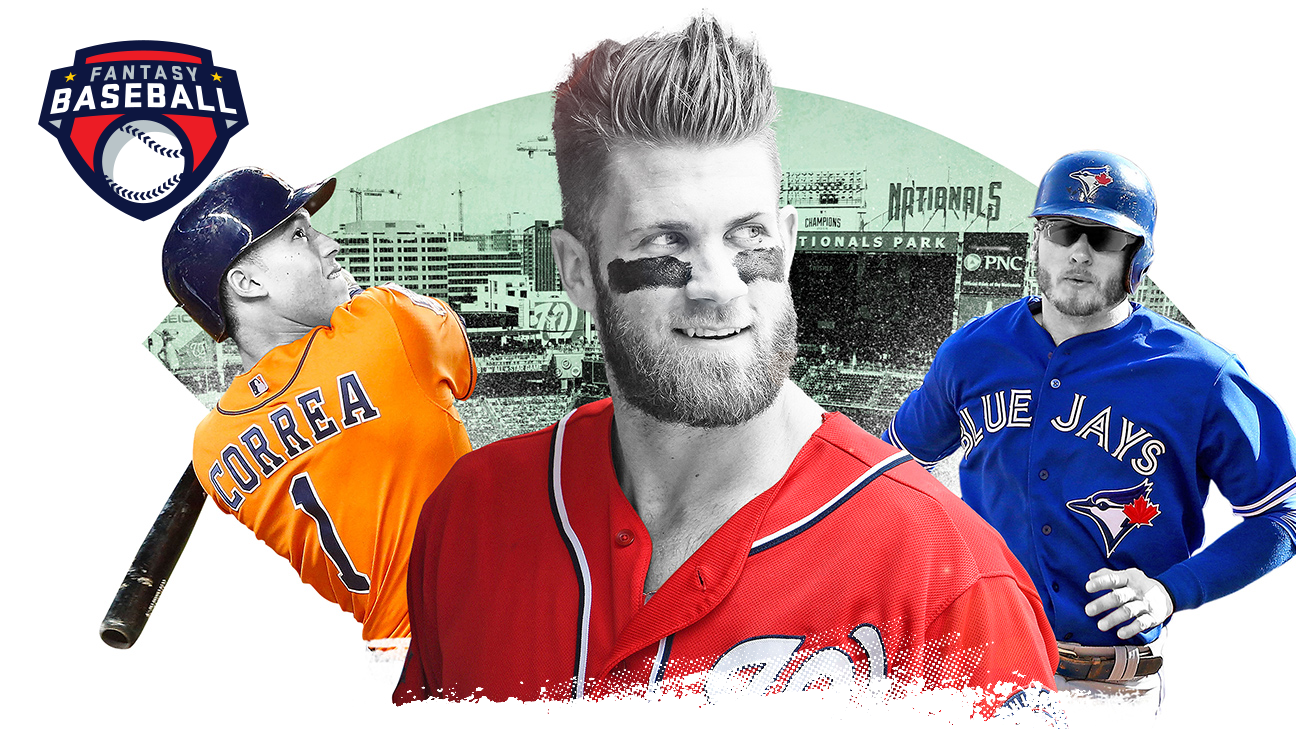 Take Anthony Rendon, for instance. He's a player with an unusually high ceiling, but also a rather low floor; these are players I'll sometimes describe as possessing a wide range of outcomes. If Rendon can stay healthy, and hit like he has this spring, he might match -- or potentially exceed in the batting average and/or home run categories -- his 2014 numbers. But because of his injury history, there's also significant risk that he might endure another year as disappointing as his 2015.

Neil Walker, meanwhile, has a low ceiling but also a high floor; he is a player I'll sometimes describe as possessing a narrow range of outcomes. He's likely to play his typical 135-150 games, batting .260-.280 with 18-22 home runs. In other words, he'd be termed a predictable player.

Not that there's anything wrong with Walker, but this column is for the Rendons of the fantasy baseball world. It's the space in which I make some wild claims, some bold predictions, helping you to potentially unearth that gem that will win you your league. It is trying to find the highest ceilings and the lowest floors.

To be clear upfront, these are not guarantees -- they're in fact far from it -- and they are not predictions I'm using to drive my draft-day valuations. After all, last season in this space, I predicted that Shane Greene would strike out 180 batters. (He would strike out 50 and be a flat-out bust.)

Use these predictions however you wish, be it to identify high-upside targets at bargain prices, for friendly banter with your buddies at your live draft or auction, or merely as something to comment on to me, whether in the comments below now or after the season, "Tristan, you are/were nuts about this one."

Brad Ziegler will finish with more saves than strikeouts. Not bold enough? He'll do it while notching at least 35 saves.

Robbie Ray will finish higher on the Player Rater than Shelby Miller, thanks in large part to the greater strikeout total between the two.

And, keeping with the theme of the Arizona Diamondbacks getting entirely beneath-the-radar seasons from corner outfielders this decade, Socrates Brito will manage at least 10 home runs, 20 stolen bases and 130 games played.

Mallex Smith will make his big league debut for the Atlanta Braves before Aug. 1, and in the season's final two months, he'll steal at least 20 bases.

After seven long big league years, Matt Wieters will finally reach the 25-homer plateau, leading all catchers in the category.

Though it'll require a second-half surge for him to get there, Blake Swihart will lead all American League catchers with a .291 mark.

Addison Russell might not overtake Francisco Lindor on the Player Rater during their sophomore seasons -- Lindor's speed will make it mathematically difficult -- but Russell's 20/10 numbers will make it extremely close.

Raisel Iglesias will double his rookie-year strikeout total (104 then, so 208).

Anthony DeSclafani, meanwhile, will strike out at least 175 batters while shaving a full run off his ERA (4.05 in 2015).

Adam Duvall will finish the season with almost identical numbers to Marlon Byrd's 2015; Byrd finished 231st on the Player Rater.

Byrd will finish the season with almost identical numbers to Duvall's 2015; Duvall had 72 plate appearances of .219-5-9.

Four members of the Cleveland Indians' rotation will strike out at least 200 batters and the group will total 1,000, making them the first team in history to accomplish either feat. In the process, Corey Kluber will recapture the American League's Cy Young Award.

In their 24th season of existence, the Colorado Rockies will finally have a closer notch at least 30 saves with a sub-2.50 ERA: Jake McGee.

Miguel Cabrera will enjoy his 10th career season with at least a .300 batting average, 25 home runs, 100 RBIs and 145 games played, giving him the second-most years in history meeting all four thresholds; Lou Gehrig had 11.

J.D. Martinez will lead the American League in home runs.

Justin Upton will hit more home runs than the Cincinnati Reds' pitching staff will total saves. It's an odd one, I know, but it's a legitimate home-league board bet I have with a fellow owner.

George Springer will be baseball's only 30/30 man, becoming the first to do so since Ryan Braun and Mike Trout both did it in 2012.

A.J. Reed, Tyler White and Marwin Gonzalez will all finish higher on the Player Rater than Evan Gattis.

The Houston Astros' team leader in strikeouts will be Mike Fiers.

Only one member of the Kansas City Royals' rotation will finish among the Player Rater's top 75 starting pitchers, but he'll be a top-25 starter: Yordano Ventura.

Yasiel Puig will win the National League's Most Valu ... kidding, kidding, I can't go back there, but Puig will rebound for his first 25-homer season and a top-10 outfielder finish on our Player Rater.

Garrett Richards will finish with at least 200 strikeouts and a sub-3.00 ERA.

That might not surprise you, so how about this: Come season's end, fantasy owners will look at the Player Rater and remark, "Wow, how did Andrew Heaney wind up a top-40 starter?"

That'll be fewer home runs, however, than Marcell Ozuna hits, as the 25-year-old outfielder who was heavily rumored to be traded this winter hits 28 of his own.

Jonathan Villar will steal at least 40 bases while adding third-base eligibility (that the result of a mid-July Orlando Arcia promotion).

The Minnesota Twins will make John Ryan Murphy their regular catcher by Memorial Day, and he will finish among the top 10 at his position on the Player Rater.

The American League's Rookie of the Year race will be a runaway, won by Byron Buxton, who will display elite defense, 30-steal speed and 15-homer power.

Kevin Jepsen will finish with more saves than Glen Perkins.

Trevor May will finish with at least 25 holds, 75 strikeouts and a sub-3.00 ERA, ranking as one of the five most valuable non-closers in fantasy.

Jacob deGrom will be a top-five fantasy starting pitcher. Not that bold, I know, but look at that New York Mets roster; not a lot that inspires boldness. Perhaps: Noah Syndergaard has a better year than Matt Harvey?

Three New York Yankees relievers -- Dellin Betances, Aroldis Chapman and Andrew Miller, in no particular order -- will finish higher on the Player Rater than every member of 11 other teams' bullpens.

The Milwaukee Brewers will not be one of those 11 bullpens.

Sean Manaea will be recalled by the Athletics before the All-Star break, and at one point will enjoy a 10-start span during which he'll have 67 K's.

Khris Davis will hit at least 30 home runs, including 19 at O.co Coliseum, the most by any player at that venue since Jack Cust hit 20 there in 2008.

Billy Burns will lead the American League in stolen bases by a margin of at least eight.

Despite signing with the Philadelphia Phillies only a couple of days ago, Will Venable will finish the year as their highest-ranked outfielder on the Player Rater.

Vincent Velasquez will be the Phillies' highest-ranking starting pitcher on the Player Rater, and thanks to his team-leading 170 strikeouts, he'll rank among the top 50 in the majors at the position.

At least 10 Phillies pitchers will record at least one save but no individual will manage more than 15, the number accrued by team leader Dalier Hinojosa.

Juan Nicasio will strike out more than 150 batters.

The Pittsburgh Pirates will finish two Gregory Polanco home runs shy of having all three of their starting outfielders ranked among the top 10 at the position on the Player Rater. Between Polanco, Andrew McCutchen and Starling Marte, the Pirates will get at least 60 homers and 90 steals from their trio.

Stephen Piscotty will hit 20 home runs and score 100 runs, making him one of only 10 players to reach both thresholds.

Jaime Garcia will stay healthy enough to make 30-plus starts for the first time since 2011; he'll also have an ERA at least a quarter-run beneath his 3.56 in that year.

Cory Spangenberg will have the quietest 25 steals in baseball.

Jabari Blash will mount a serious challenge to Matt Kemp for the San Diego Padres' team home run crown. Both will hit at least 20.

No Padres reliever will save more than 20 games, but Brandon Maurer will save a team-high 18 and finish as their highest-ranked relief pitcher on the Player Rater.

Drew Pomeranz will be the Padres' second-highest ranked pitcher -- that is, among either their starters or relievers -- on the final Player Rater.

Hunter Strickland will save at least 25 games.

Only one Seattle Mariners reliever will save 20-plus games, except that it won't be Steve Cishek. It'll be Tony Zych.

Nori Aoki will score 90-plus runs as the Mariners' leadoff hitter for at least 140 of their games.

Taijuan Walker will finish the season with more wins and a lower ERA than Felix Hernandez.

The Tampa Bay Rays will place all five members of their rotation among the Player Rater's top 250 overall; only the Chicago Cubs could claim that in 2015, and one of their five, Dan Haren, spent two-thirds of the year with the Miami Marlins.

Alex Colome will have twice as many saves as anyone else in the Rays' bullpen, and he'll finish among the top 30 relief pitchers on the Player Rater.

Though his batting average will plummet by at least 25 points from either of his past two seasons playing half his games at Coors Field, Corey Dickerson will set a new career high in home runs (his previous best was 24, set in 2014).

We'll see Nomar Mazara in the majors before we see Joey Gallo again. In fact, Gallo won't even get 50 plate appearances in the bigs this year.

Rougned Odor will lead all second basemen with 25 home runs.

The second-highest-rated member of the Toronto Blue Jays' staff on our Player Rater will be Aaron Sanchez.

Trea Turner won't return to the Washington Nationals before Sept. 1.

Stephen Strasburg will win the National League's Cy Young Award. I know, I keep going back to that well.

The National League's Rookie of the Year winner will be Lucas Giolito, despite a post-Memorial Day debut and only 20 starts.