Was Thomas Rawls' 2015 breakthrough a signal that he has arrived as a member of fantasy football's elite, or have fantasy owners merely manufactured that opinion from his limited sample size in the NFL?

Rawls is ranked as our No. 20 player overall and No. 10 running back, though he's being selected slightly later in average drafts: 26th overall and 12th at his position. To evaluate the merits of selecting him that soon, we asked analysts Matt Bowen and Tristan H. Cockcroft to debate some of the factors behind Rawls' value.

Bowen: Rawls rushed for 830 yards as a rookie in 2015 for the Seattle Seahawks, and he also led the NFL with 5.65 yards per carry -- this cat can play. But will the second-year man be back on the field for the start of camp? I'm talking about actual practice, not some sideline show going through monitored drills and conditioning work with the training staff.

The reports? Yeah, they look good for Rawls after suffering a season-ending ankle injury versus the Ravens in Week 14. He's expected to be on the field, ready to roll. And even if Rawls is somewhat limited (or eased back into the fold by Pete Carroll & Co.), seeing actual camp reps should tell us plenty.

Remember, reps are the key here. Those are critical to regular-season prep. Set the pads. Beat up the legs a little bit. Go through that period when the body starts to break down before recovering around mid-August. And if Rawls is getting those reps (even under the watchful eye of Carroll), fantasy owners should put a high grade on the Seahawks' No. 1 back.

Cockcroft: A broken ankle (including torn ligaments) ended Rawls' mini-breakthrough 2015 campaign after Week 14, and the timing of his healthy return -- that is, a return to full health -- should have much influence on his fantasy draft stock.

Is he fully healthy now? Will he be by the start of Seahawks training camp July 30? The Aug. 13 preseason opener? The Sept. 11 regular-season opener? Or ... gasp ... later?

The offseason -- especially the weeks leading up to training camp -- is rife with player optimism in the health/fitness department. Frankly, we as fantasy owners always seem to assume the most optimistic outlooks when it comes to injuries. Remember Alshon Jeffery's preseason injuries entering 2015?

That's why Rawls' confident comments leading up to training camp shouldn't be taken to heart; these followed an offseason during which Seahawks coach Pete Carroll couldn't promise an uninterrupted training camp for Rawls. It's one positive step in a healing process that's no guarantee to be setback-free, and one that by all means should cause Carroll to play things conservatively with Rawls' preseason usage.

Preseason reps would prove extremely useful for a player who was afforded only seven full, uninterrupted starts (primary-back starts) as a rookie.

Competition in the backfield

Cockcroft: This is what compounds my previous concern -- the Seahawks seemingly tipped their hand concerning a need for depth behind Rawls during the NFL draft, selecting three running backs -- C.J. Prosise, Alex Collins and Zac Brooks -- who now stand as competition for snaps, along with 2015 returnee Christine Michael. All four likely enjoy one advantage: A fully healthy training camp to catch a coach's eye.

In particular, Prosise presents the greatest worry. A converted wide receiver, the Notre Dame product was already ticketed to handle third-down duties, cooling any hope that Rawls might've increasingly contributed in that regard in 2016 after he amassed 38 routes, seven targets and six catches during his final four full games last season. Carroll has already said he has "big plans" for Prosise; beyond receiving chores, a change-of-pace role behind Rawls, especially early in the season if Rawls isn't truly 100 percent, isn't unthinkable. Comparisons to David Johnson, one year ago at this time, aren't entirely out of place, as Prosise possesses a similarly intriguing package of size and speed.

A caveat: Prosise missed a good chunk of OTAs with a hip issue, so, like Rawls, his health needs be monitored when camps open. 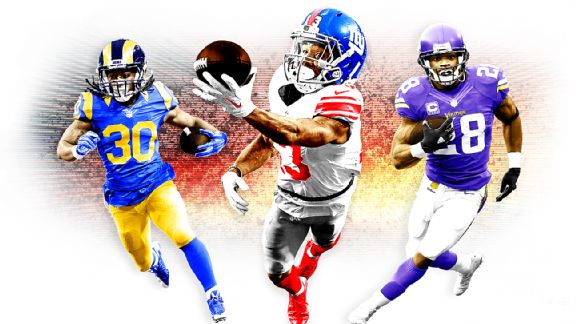 Our fantasy football draft kit has everything you need to prepare for your draft, including mock drafts, expert analysis and rankings for all sorts of leagues. Click here.

Michael and Collins, meanwhile, could factor in if Rawls isn't ready at the onset of training camp, and either could get significant opportunities during preseason games. Michael finished 2015 with 262 yards on 60 carries in a four-game span from Week 15 through the wild card round. He shed some weight during the offseason and was running with the ones during OTAs. Carroll, remember, proclaimed Rawls and Michael a formidable "one-two punch" early in the offseason.

What Rawls' owners don't want is any other running back behind him on the depth chart impressing in the preseason's early stages, tempting Carroll to shift his plans closer to a running back-by-committee arrangement. In an era where such a strategy is widespread, it might not take much convincing.

Bowen: The Seahawks drafted three running backs this past spring. That's a lot of attention to one position, right? No doubt. And with Carroll, there is going to be true competition. He's proven in the past that the best guys are going to be on the field regardless of draft status, money, etc. Earn it.

Now, the first expected threat to Rawls' touches is probably Prosise. He has an NFL style when carrying the ball. That's pad level on contact and the ability to find daylight. He's a slasher with pro size, too (6 feet, 220 pounds). I like his game. Plus, he's going to get plenty of opportunities to impress Carroll's staff in practice time and preseason reps.

However, regardless of what we have seen on the college tape with Prosise, or how he projects at the NFL level, making the jump to the league isn't that simple. Even if Prosise shows the team that he can run the rock during camp, can he make the transition to the NFL playbook, hold onto the football and do the dirty work? I'm talking about pass protection, for example. If you can't block, or pick up blitzes, you don't play in the pros. It's that simple. And many talented backs couldn't get on the field as rookies because they allowed their quarterbacks to take shots under the chin. That's trouble.

This is where Rawls has the advantage after playing a year in the league and showing that he can handle the full-time responsibility of a top back. Yes, competition is good. And the best teams in the league want competition at every position. However, if Rawls is on that practice field during camp, fantasy owners shouldn't panic when they see some competition from a rookie who carried the ball for only one season in South Bend.

Bowen: One of the main reasons I am high on Rawls heading into the season revolves around offensive coordinator Darrell Bevell's scheme in Seattle. It's balanced. It's creative. And the running game is a priority. Zone and power. Get downhill. Pound the ball. Questions on that Seattle O-line? Yeah, I hear you -- it's suspect.

However, with Russell Wilson at quarterback, the game changes. And so does the defensive game plan. I'm talking about the zone-read scheme, the ability of the Seahawks to essentially "block" an unblocked defender through the actual "read." That's the end-man on the line of scrimmage, the defensive end or outside linebacker who has to play the dive (inside zone) to Rawls or stay outside to stop Wilson should he keep it

Easy to defend on the chalkboard, but with the threat -- just the simple threat of Wilson pulling the ball and getting to edge -- there are natural running lanes created. Coaches call it the "bend" when the running back takes the ball and pushes through the lane created by the defensive end staying outside to play the quarterback. And just as we saw with Marshawn Lynch in Seattle, Rawls has the vision -- and the burst through the hole -- to hit that bend and go. He's a weapon. And he also can get through contact. Rawls led the NFL in 2015 with 2.68 yards after first contact. He's got some juice in those legs.

Given the numbers Rawls produced in 2015, the film he has to back up his game and his fit in Bevell's scheme as a downhill runner with the vision to cut and find running lanes, he should be considered a second-tier RB1 for owners this season if his health checks out. And with the reports we are seeing on his injury rehab, Rawls is in line to have another productive year for Carroll's club.

Cockcroft: The Seahawks' offensive line was one of the league's worst-performing units in terms of run blocking in 2015, and despite it enduring a lot of turnover during the offseason, it's not necessarily that much better on paper. Certainly it shouldn't be ranked in the upper half -- I'd argue even a top-20 O-line ranking is somewhat generous -- which is a concern for Rawls' chances at repeating his lofty yards-after-contact numbers, especially if his season gets off to a slow start due to injury or limited preseason reps.

Granting Rawls the benefit of the doubt, both in the health department as well as his possessing only seven games' career evidence, is dangerous in fantasy draft terms. He'd have made my RB1 class without the injury question that probably influenced the Seahawks' draft-day strategy; as is, he's a dangerous pick as anything more than a high-end RB2, and I don't like to build my fantasy teams around higher-risk players with my first few picks. I want to believe in Rawls, but doing so fully today isn't being completely realistic.

That could always change, however, depending upon how things play out during the preseason. Rawls' situation is one requiring a good amount of homework; his progress will need to be closely watched, and those who select him in early drafts will be keeping their fingers crossed that his August progresses smoothly. Today, there just isn't enough certainty that he'll secure a role that puts him in position to thrive.