LPGA pros practicing alongside the men

PINEHURST, N.C. -- Running into a fellow golfer at the gym typically isn't a big deal for LPGA Tour pro Natalie Gulbis. Except that golfer was Martin Kaymer, who would go on to become the 54-hole leader at the U.S. Open with a second major title within his grasp. 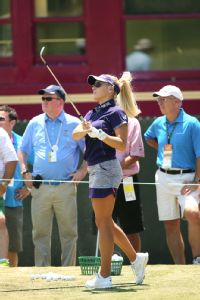 Mike Ehrmann/Getty ImagesNatalie Gulbis practiced alongside the men at Pinehurst No. 2 on Sunday in preparation for the U.S. Women's Open.

For the first time in history, the men's and women's U.S. Opens are being played in back-to-back weeks at the same venue -- Pinehurst No. 2 -- with the men finishing up Sunday and the women commencing Thursday.

"I wished they'd do it every year," Gulbis said Sunday, pausing between hitting practice balls on the far end of the driving range. "I haven't even gone through it yet, but it's so cool."

This week's experiment, she said, was similar to how tennis Grand Slam tournaments are held at the same venue all the time.

"I've watched more golf this week than I ever have in my life," Gulbis said as players such as Keegan Bradley, Steve Stricker and Aaron Baddeley warmed up just a few yards away.

She added that she has been keeping an eye on the hole locations during the men's event, hoping to glean some information that will help her next week. She picked the brain of 2010 PGA Championship winner Kaymer about the course as well as the upcoming Germany-United States match in the World Cup on June 26.

Gulbis played in both U.S. Women's Opens down the road from Pinehurst at Pine Needles and has practiced there since she arrived in the area Thursday. But she hasn't played No. 2 since it was restored to its original design in the past few years by Bill Coore and Ben Crenshaw.

"Just watching the men play it, it's a pretty intimidating golf course," she said.

The main thought behind the back-to-back Opens, according to the USGA, is to boost awareness of the women's game. Along with that goal, golf's governing bodies have scheduled majors at some of the game's most famous courses in recent years, including the 2010 U.S. Women's Open at Oakmont and the Women's British Open at St. Andrews in 2007 and 2013.

As several players got to the course Sunday, Gulbis said many of LPGA Tour pros didn't realize they could practice there while the men were still playing.

A few hours before the leaders at the men's U.S. Open teed off Sunday, Gulbis posed a question to the reporters assembled around her: "But do you know what is good? I don't have to play today."

Gulbis, along with her fellow competitors, will get their shot starting Thursday.