Garcia knocks diamond into the rough

When Sergio Garcia's tee shot on the third hole at Firestone Country Club struck a fan Sunday afternoon, the collision knocked the diamond from her engagement ring and into the ankle-high rough. As fans tried to help her find the gem, Garcia still had a shot to play as the 54-hole leader at the WGC-Bridgestone Invitational. 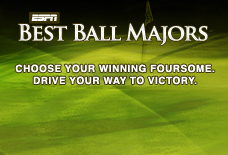 The typical "payment" from a PGA Tour player after hitting a fan with a shot is usually an autographed golf glove or ball. This time, the Spaniard might have had to dig a little deeper.

To his credit, after hitting his shot, Garcia continued to look for the diamond, to no avail. But he clearly wasn't just going to forget about the incident.

"When we're done, can you get me her contact number please?" Garcia was heard saying on the television broadcast.

Fortunately for Garcia and probably his bank account, the diamond was found and returned to the owner a short while later.

In terms of the golf tournament, Garcia had come to the hole with his 3-shot lead trimmed to 1 after playing partner Rory McIlroy birdied the first two holes in the final round. After the incident, Garcia missed the third green with his approach shot and failed to get up and down, making a bogey.

McIlroy made birdie and became the outright leader at 14 under while Garcia dropped to a shot behind.