03/25/12
6:39
PM ET
By Farrell Evans
ORLANDO -- Tiger Woods won the Arnold Palmer Invitational on Sunday. It was his first official PGA Tour win since the 2009 BMW Championship and his seventh victory at Bay Hill. The victory ends a 28-month winless streak on the PGA Tour, the longest of his 16-year professional career.
[+] Enlarge 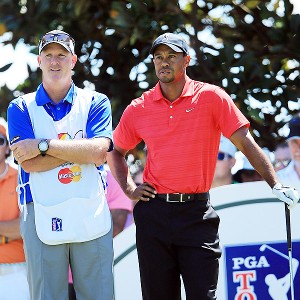 David Cannon/Getty ImagesTiger Woods' seventh victory at Bay Hill is the 72nd of his PGA Tour career. He trails Jack Nicklaus (73) and Sam Snead (82) on the all-time list.

Starting his final round with a 1-shot lead over Graeme McDowell, the 36-year-old former Stanford star had a 3-under-par 33 on his front nine to make the turn with a 4-shot lead over McDowell. Looking slightly less assured, Woods shot a 1-over-par 37 on the back nine. But McDowell never mounted a real charge.

Woods' final-round 2-under-par 70 and 13-under total was good enough for a 5-shot win over McDowell, who had a disappointing 2-over-par 74 on Sunday.

Inside the scorecards: When it looked like Woods might pull away from the field, McDowell made a 51-foot eagle putt at the par-5 6th hole to stay within 2 shots of Woods, who made a birdie at the par-5. But at the 12th hole, McDowell sealed his fate with a bogey at the easy par-5 to fall 4 shots back of Tiger with six holes to play.

As Tiger's only real pursuer during the final round, McDowell couldn't put any real pressure on the 14-time major winner. The Northern Irishman missed a very makeable 10-foot birdie putt at the 13th hole that would have gotten him to within 3 shots of Tiger.

At the 15th hole, when it looked like McDowell might cut into the lead, Tiger made a 13-footer to save par after hitting his drive into a fairway bunker. After Tiger missed his birdie putt at the 16th hole, McDowell missed a 9-foot birdie.

Get all of ESPN.com's latest news, highlights and commentary about the world's most talked-about golfer. Tiger Tracker

That was the last chance the 32-year-old former University of Alabama-Birmingham player had to put any real pressure on Tiger. In the end, McDowell couldn't make some key putts down the stretch that would have made for a more compelling final round.

Key stats: Woods birdied two of the four par-5s on Sunday and birdied 12 of 16 of those holes for the week. It was also the first time since the 2010 Masters that he shot under par in all four rounds of an official PGA Tour event. Woods hit his first 10 greens of the day and tied for second in greens in regulation for the tournament. He led the field with 20 birdies.

What it means: With his 72nd victory, Woods moves to sixth in the world ranking. He is now just one win short of matching Jack Nicklaus' 73 for second all-time on the PGA Tour wins list and 10 shy of Sam Snead's mark of 82 wins.

All four of Tiger's Masters wins have come after he won a PGA Tour event in the same calendar year. Two of those Masters wins came after victories at Bay Hill.

This win also marks his first with the new golf swing engineered by instructor Sean Foley, who Woods began working with at the 2010 PGA Championship. It was also his first win with Joe LaCava, who he hired away from Dustin Johnson last September.

Bay Hill is only a few miles from Woods' former home in Windermere, Fla., where on Thanksgiving night 2009 a chain of events was started that led to embarrassing revelations of his extramarital affairs. This was also his first official post-scandal win.

Ernie Els' Masters chase: After a T-4 finish at Bay Hill, the 42-year-old South African and three-time major champion failed to get into top 50 in the official world ranking, which would have earned him a spot in the Masters in two weeks. Els needed an estimated solo third-place finish or better to jump inside the top 50. Late on Sunday, he still had a chance until the par-3 17th, where he made a bogey after hitting his tee shot inside the hazard.

Farrell Evans covers golf for ESPN and can be contacted at evans.espn@gmail.com.