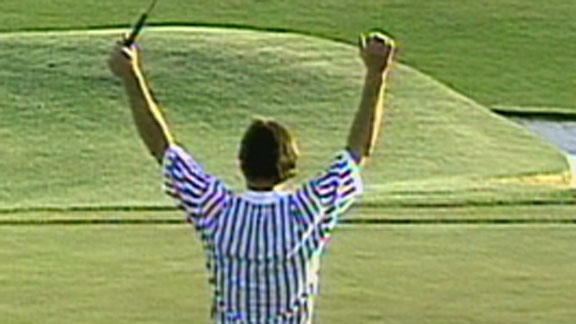 Appreciation comes with time, but there might not ever be enough of that when it comes to Nick Faldo's 1996 Masters victory. The tournament will always be remembered for Greg Norman's collapse. He bled all over Augusta National.

Meanwhile, Faldo shot a 67, one of the best final rounds in major championship history, especially considering the six-shot deficit he faced that day.

So is it more about Norman's collapse or Faldo's charge?

It is difficult not to make Norman's final-round 78 the story, when anything around par would have gotten the job done, no matter what Faldo did.

But you have to give credit to the Englishman for applying the pressure.

One of the most popular players in the game seemingly had his hands all over that elusive green jacket. With an opening 63, he tied the course record. He took a six-shot lead into the final round. It disappeared in 11 holes. Faldo went on to win by five.

Everyone, of course, remembers Norman's collapse. But you have to admire Faldo's 67.

"It was an unusual day. We all know what happened," Faldo said. "It was a hell of an atmosphere going on. It was quite an arena to play in. Augusta is amazing to play in anyway. But when something like that is happening … it really was quite electric, an unusual atmosphere."

The Shark had endured so many close calls at the Masters, including his wayward approach to the 18th a decade earlier, when Jack Nicklaus won, and his playoff defeat in 1987, when Larry Mize chipped in on him. This was to be his time.

It began to unravel, unbeknownst to Norman or anyone else, when Faldo birdied No. 18 on Saturday. That put him in the final pairing with Norman. Playing head to head with one of the game's all-time steely competitors proved difficult for Norman; had Faldo not birdied at the end of the third round, Norman would have played the final 18 with 25-year-old Phil Mickelson.

Faldo made one bogey on the front nine but had three birdies to keep the heat on Norman, whose six-shot advantage was all gone by the time they reached the 12th tee. There, Norman's tee shot went in the water, and he fell behind by two.

Birdies by Faldo at the 13th and 15th holes kept Norman at bay. And when Norman hit his approach in the water at the par-3 16th, it was over, making Faldo's birdie at the 18th anticlimactic.

In an uncommon show of emotion, Faldo hugged Norman and uttered a few words in his ear. He kept what he said a secret for eight years, finally letting out that, in so many words, he told Norman not to let the media or anyone get to him.

"I felt for the guy because I would hate for that happen to me," Faldo said. "People make assumptions, six-shot lead. There are no assumptions at Augusta. My goal was to get within three after nine. And a three-shot lead on the back nine at Augusta is nothing. I genuinely felt for him. I wouldn't want that to happen to me. I've been fortunate. I haven't been scarred by this game."

No, but will he be appreciated for that victory? Will the masses remember Norman's collapse or Faldo's fine play?