Michelle Wie was the story last week, but as the 15-year-old missed the cut at the John Deere, Tiger Woods was busy in Ireland preparing for this week's British Open. 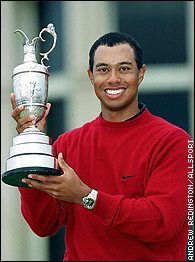 He played in the JP McManus Pro-Am in Limerick, worked on his fly-casting in the River Liffey and rested up for St. Andrews. Fishing, Woods will tell you, has a metaphorical connection to golf. You can get all the preparation right, make the perfect cast, have the line lie down on the water beautifully, have the trout take the lure  but then you still have to bring the fish in. It's like the back nine in golf. You have to close.

Butch Harmon has the same feeling a lot of people have about Woods winning the British Open at St. Andrews. It's not a lock, but Tiger is the odds-on favorite. Besides the course fitting his eye, and his imagination, and being the place where he has won once already, there's the category of power. The power added to his tee ball since 2000. "He'll just aim left and hit the hell out of it," Harmon said.

It's still about golf, though, so the engraver at St. Andrews had better not do any early work on the Claret Jug. Those bunkers Tiger avoided five years ago beckon. He can't fly them all. Or can he? Besides, it's not all about distance. It's about luck, too. Especially on courses where the ball ricochets, caroms and runs like a scared rabbit.

More than any major, the Open Championship has become a tournament that has identified the unlikely. Since 1999, the title of Champion Golfer For The Year has belonged to the likes of Paul Lawrie, Ben Curtis and Todd Hamilton. And if it hadn't been Lawrie, it could have been, should have been, Jean Van de Velde.

Woods, David Duval and Ernie Els won after Lawrie's playoff win at Carnoustie, returning some semblance of order to the Open Championship, then it was back to the unknowns or the underdogs. Curtis benefited from the torture suffered by Thomas Bjorn at Royal St. George's. Hamilton beat Els by a stroke over the last 40 holes at Troon. It's about golf, and when it gets quirky -- as it does in the Open Championship -- funny things happen.

Pinehurst was one of those venues that played pretty close to a British Open, and look what happened: Michael Campbell controlled his ball and his emotions better than anybody, but Michael Campbell? That's what happens in an environment where the ball doesn't stick. Luck becomes more of a factor.

When you get right down to it, there's not much difference between Hamilton and Campbell. Hammy won 11 times in Japan and once in America before his Open Championship. Cambo won six times in Europe and in various other tournaments in Australia, New Zealand and the Pacific Rim -- not to mention the St. Louis Open on the Tommy Tour. When it comes to grinding it out, getting it up and down, who's better than a guy who has spent a career getting back up after being so down?

What was so impressive in both cases -- and with Shaun Micheel and Rich Beem in the PGA and Lawrie in the Open playoff -- is that when the time came to close, they did. They acted as though they were Woods. In Beem's case, acting like Woods helped him hold off Woods.

This is golf, too. It shows that the percentage of those third-round leads Tiger held was supernatural, that even the great ones -- perhaps the greatest one ever -- are prone to human error and susceptible to nerves.

The key is the bounce back and the timing involved. Woods bogeyed 17 and 18 at Augusta, but Chris DiMarco's chip lipped out, so it didn't matter. When he bogeyed 16 and 17 at Pinehurst, it looked as though it didn't matter because Campbell birdied 17 -- but would Campbell have made the putt on the 71st hole if he had been 1 stroke up instead of 2? And would Furyk have been able to get to the clubhouse at 13 under had Tiger not slipped up after those bogeys at 13 and 14?

Just the week before, with a 1-stroke lead, Furyk bogeyed the 70th and 71st holes at Westchester, giving Padraig Harrington the opportunity to beat him with a long commute across the 18th green. Woods described that finish by Furyk as an aberration, and in the context of it being his 10th tour win, it was an aberration. You won't go double digits, including a U.S. Open, without being able to close. But Furyk has left his share on the table, too. They all have.

Look back to Els last year at Shinnecock. Look back to Retief Goosen in the final round at Pinehurst. Look back to Vijay Singh at this year's Honda and Bay Hill tournaments. Look back to Phil Mickelson in the PGA at the Atlanta Athletic Club. The pressure gets to everybody.

Sergio Garcia had a 6-shot lead at the Wachovia and lost in a playoff to Singh. Four weeks later, he came from 2 back to win the Booz Allen at Congressional. It's as though what happened at Quail Hollow never happened. That's the way you have to think if you're a closer. You're a fighter pilot, a defensive back or a fisherman. You can't live in the past.

What's so dangerous about Woods as it relates to the Old Course is that he has had his chances skip away at Pinehurst and Cog Hill. In his mind, he knows how he was feeling, what he did wrong and how he can correct it. As with Furyk at Westchester, it is an aberration for Woods to lose one when he had it on the line.

In other words, the Claret Jug is the big fish. I don't expect Woods to let this one get away at St. Andrews.