John Daly has been called a lot of things during his 39 hard years, although probably not a saint. But that could change next month when two young women he helped through college express their gratitude and show him their diplomas. 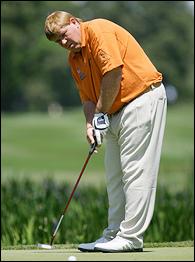 "After all this time, we'll finally get to meet John Daly and talk to him," says Karen Weaver. "For someone to do what he did for my sister and me, complete strangers, is remarkable. The fact that John never sought out any publicity for his gesture makes it even more unbelievable. He must have some big heart, John Daly. He must be something."

In 1991, John Daly was nothing when he entered the PGA Championship at Crooked Stick Golf Club, just outside Indianapolis. He wasn't yet Wild Thing whose "Grip It and Rip It" doctrine would captivate audiences worldwide. He was the ninth alternate in the field, replacing Nick Price. The rest, as they say, is hysteria. Daly won against all odds, fast-forwarding a career that has elevated him to star status.

But during the first round in 1991, a violent storm enveloped Crooked Stick, and as spectators scurried toward shelter, one of them didn't make it. Tom Weaver was struck by lightning and died instantly. He was 39. He left behind a wife and two girls. He couldn't have imagined how they would be picked up by a mere golfer after that tragedy.

"I felt I was almost responsible for him being killed," Daly recalls in a lengthy interview appearing in August's Golf Digest. So after receiving his $230,000 check, Daly dedicated $30,000 toward the education of Karen, 8 at the time, and Emily, who was 12. Daly was engaged to his second wife then and already was juggling debts and demons. But this rabid drinker, gambler and smoker also is a compulsive giver, and Daly says the donation was a no-brainer, which tells you a lot about what's beneath all those logos.

"There is goodness in John Daly," says Dee Weaver, the bereaved widow who has since remarried. "I have tried to follow him through the years and have seen some stories and headlines about his problems. Well, don't we all have problems? I don't know anybody who's perfect, do you? What we dealt with after Tom's accident was overwhelming.

"[Tom] had gone ahead and opened the doors to the car in the parking lot. He was this close to safety when he was hit in the chest. I had to tell Karen, who was home in our house, and Emmy, who was away at camp, that Daddy was gone. All I knew about John Daly was that he'd won the tournament. Until I got a call a few days later: 'John Daly has put $30,000 in a trust for the girls.' What a surprise. And then, a couple weeks ago, another surprise. The phone rang. 'Hi, this is John Daly.' First contact with him, ever. I was speechless."

Daly says he was reluctant to reach out to the Weaver family for fear he would stir sad memories. "Another thoughtful gesture," says Emily. But Steve Fisher, who married Dee in 2000, managed to locate Daly via e-mail in mid-April. Big news. Karen would be graduating from Indiana University, where she majored in biology, with plans to become a doctor. And then Emily -- now Emily Edmondson, of Oswego, Ill. -- was going to earn her degree as a respiratory therapist from College of DuPage, not far from Chicago. Steve and Dee wanted Big John to know about the fruits of his largesse, and Daly was touched.

"It's amazing what a little money can do when it's spent on the right reason," Daly said at last week's Cialis Western Open, where he admitted he's liking life more now and dwelling less on negatives. "That was really nice of them to find me. And since they're all still near Indy, I've asked them to come see me in mid-August. Fuzzy [Zoeller] has his annual charity event not far from there. They're invited."

And they're planning to be there. Karen is working when she's not studying, and Emily toils the graveyard shift in a hospital, but it has been 14 years since Tom left and John appeared.

"I can talk about it now," says Emily. "Whenever I think of golf, it's bittersweet. My Dad was just starting to take me to lessons when he died. Now my husband, Curtis, plays. All I tell him is if it looks like rain, go inside. As for John Daly, in 1991 he was about my age now. I don't know if I would be as thoughtful as he was."

Karen, meanwhile, continues to learn. "I didn't realize until recently John wasn't rich when he did what he did," she says. "He was just starting out in golf. That was his first big payday, and he donated that generous amount to us. I've got friends who had to hold a job through college, and it's very difficult. Partly because of John, I didn't have to. Mom and Dad had put some money away, but John  you know, lots of people make promises, then never follow through. John made a quiet pledge and never asked for anything in return. But he's going to get something next month. If he'll let me. A big hug."

Bob Verdi is a senior writer for Golf World magazine