ST. ANDREWS, Scotland -- Time, of course, is a creation of humans, an artificial imposition of order upon the endless unfolding of events.

But it is the events that truly mark the passage of time, not the tick of a clock or the turn of a calendar page. Hours, days, months and years fall by the wayside leaving no mark behind other than the memory of what occurred. 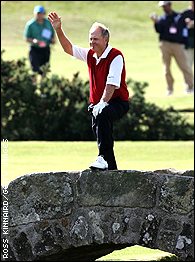 Such is the recollection of a day 45 years ago, when golf had its perfect storm as the lives of Ben Hogan, Arnold Palmer and Jack Nicklaus -- the game's past, present and future at the time -- crossed paths at Cherry Hills Country Club in the U.S. Open.

And 45 years from now, those who love this grand old sport will look back on July 15, 2005, as the day Nicklaus stepped aside and left the title of golf's greatest living competitor to Tiger Woods. Somehow it is fitting that in what is likely the last major championship of Nicklaus' amazing career, Woods stepped forward to reassert his dominance.

It was at that U.S. Open in 1960 that the 30-year-old Palmer, who had already won the Masters, staged a comeback from a 7-stroke deficit to edge a 20-year-old amateur named Nicklaus and claim what would turn out to be his only U.S. Open title. The 47-year-old Hogan, who had won four U.S. Opens, remained in contention until the 71st hole when, trailing Palmer by 1 stroke, his approach shot missed by a yard of being perfect and trickled back into the water.

After that round, Hogan told reporters: "I played with a kid today who would have won by 10 strokes if he knew what he was doing." What Hogan meant was that Jack -- his playing partner for 36 holes -- had yet to master the course management skills for which he would later become famous as the best since Bantam Ben.

That the lives of Hogan, Palmer and Nicklaus intersected on that day marks time better than any calendar page. That Nicklaus chose the British Open and the Old Course at St. Andrews as the scene for his last competitive round in the four major championships completes the latter half of perfectly matched bookends for a brilliant career. Jack burst on the scene as an amateur at the U.S. Open in 1960, and he left the stage at the British Open, the oldest of golf's major championships. It is totally appropriate.

As further proof that golf may once again be poised to provide us with a magical moment, a victory this week by Woods would give him 10 professional majors, moving him past Hogan and Gary Player into third place behind Walter Hagen (11) and Nicklaus (18). And a win at St. Andrews would also tie Woods with Bobby Jones for second place on the all-time men's major championship list with 13, trailing only the 20 by Nicklaus. The effort by Tiger here this week is almost a going-away present for Jack; sort of a way to say: "As you replaced Hogan, so I replace you. The game is in good hands."

In the hearts and minds of the tens of thousands who jammed onto the Old Course Friday, there simply was no replacing Nicklaus. His 65-year-old bones were carried from every tee to each green by the loving sound of hands clapping together and the adoring shouts from a crowd with true appreciation of how Nicklaus played the game, not just as a shot-maker but as a sportsman.

Tom Watson, who appropriately enough played the final 36 holes of Jack's major championship career with Nicklaus, once said of the Golden Bear: "Jack never hit an indifferent shot in his life." And that is exactly the competitive spirit that made Nicklaus golf's greatest winner. And it was with that same passion he was still grinding Friday. The goal was no longer winning, simply making the cut, but the effort was as complete as ever, never mind that his bid fell short.

Those words uttered by any other grandfather would bring a laugh and a wink from listeners, but with Nicklaus those who heard the words knew that in the heart of this proud old bear there was the total belief he could still find that kind of round somewhere deep inside himself. While not all shared in Jack's belief, all yearned with all their hearts to see it happen, to see Jack be able to extend his career by two more days until Sunday, when the silver Claret Jug he has hoisted three times is passed on to the 134th winner of this event.

When Nicklaus made the turn for home on the Old Course, striding up the 17th known as the Road Hole, the love poured from the grandstands and those lining the fairway. His walk up the 18th, across the Swilcan Bridge and into the shadows of the stately clubhouse that marks the home of golf, will rank as one of the most memorable moments in the history of the game. Players who had finished their rounds hours earlier waited to watch. Titled British nobility shed the same tears as caddies, clerks and cab drivers.

When Nicklaus took his first step onto the Swilcan Bridge after driving from the 18th tee, he gazed down at the stone beneath his feet as if he were saying good-bye to an old friend. Pausing at the arc's highest point, he raised his left leg and rested his foot on the side rail, waving to an ovation that seemed as if it would never end. Finally he called Watson, his other playing partner, Luke Donald, and his caddie, son Steve, onto the bridge with him. It was Steve, whose toddler son died in a swimming pool accident earlier this year, who first succumbed to the emotion, wiping away a tear. They were not the last tears shed.

That Jack's last competitive stroke will be remembered as a birdie putt that found the bottom of the cup is more than appropriate. This was a man who built his legacy by never missing a putt that mattered. And it was a legacy manufactured in large part because Nicklaus played every shot as if it were the only shot that mattered.

Time is truly not about ticks of a clock or pages of a calendar, but rather a ragged collection of memories stuck in a mental scrapbook. On a summer day at St. Andrews, on golf's oldest course, Jack Nicklaus created a very special memory that not only will survive time, but define it. The Golden Bear may be gone from the competitive stage, but the memories remain.

And, oh, what memories they are. Thanks, Jack.

Ron Sirak is the executive editor of Golf World magazine