HOYLAKE, England -- Golf's big guns were poised to take aim at Tiger Woods, bring him down. They had him in their sights, with their own major championship glory also in view.

Then they ran and hid.

Oh, Woods would have been tough to beat on Sunday at Royal Liverpool, shooting a 5-under 67 to claim his third Claret Jug at the 135th Open Championship. But it sure would have been nice to see a better showing from the players whose resumes suggest they should be able to challenge Woods.

Wouldn't it be rich to see, just once, a phenomenal final round out of the supposed biggest threats? What if Ernie Els put up a 66, or Jim Furyk shot 65? What if Sergio Garcia went out in 29, like he did Saturday? 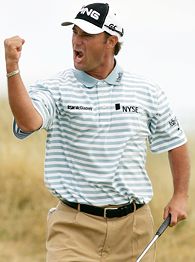 Didn't happen. Not even close.

Woods had five players ranked among the top-nine in the world within close pursuit heading into the final round, as Adam Scott and Retief Goosen also began the day with thoughts of making a move. None of them shot better than 71.

On a course that was yielding low numbers all week -- and one that did give up eight rounds in the 60s on Sunday -- that wasn't going to do the job. Not against Mr. Automatic. Not against Woods, who is now 11-for-11 in major championships when holding at least a share of the final-round lead.

So how is it that DiMarco, winner of just three PGA Tour events and none in four years, is able to go toe-to-toe with him twice in major championships? After taking Woods to a playoff last year at the Masters, DiMarco was the only player to make it interesting on Sunday.

"It's hard to catch him, and you have to give it your all," DiMarco said. "Obviously you've got to go out there and do it. I had a lot on the line today. I was trying to win, obviously. I'm trying to get major points for the Ryder Cup.

""If you can't get up playing the best player in the world in a major, I don't know where else there is. I mean, absolutely, it pumps me up."

Perhaps DiMarco has a nothing-to-lose attitude. But what about the others? Those whom we expect to do well against Woods also expect to themselves, perhaps feeling too much pressure.

Goosen and Scott were probably too far back to make a difference, but they weren't even able to put a scare into anybody on the front nine.

Els, who shot a final-round 71 to finish in third place, is still not all the way back from the knee injury that he suffered nearly a year ago, although it was telling when he said, "Competing against a guy like Tiger, for our generation of players, is really tough. He has really found a way to win majors."

Furyk, who won the 2003 U.S. Open but had not made the cut at the British Open in the past five years, was only two back at the start, but played the front nine in 3-over.

"If you go put a little heat on him, he goes and makes three birdies," Furyk said. "It's tough."

Garcia should feel the worst, but seemed to take it the best. Playing with Woods is no easy task, but he got to see what Woods was doing, competing with the eventual winner in the final pairing. He had the chance to make a move, and have Woods watch him do it.

All he did was three-putt the second and third greens to fall three back, never to be heard from again.

El Nino, who challenged Woods at the 1999 PGA Championship when he was just 19, continued a disturbing trend of playing poorly in the final round. His stroke average of 74 was 181st on the PGA Tour for the last round. He shot 73 to tie for fifth, then said "I can take a lot of positive things out of this tournament."

Like what? That Woods beat him 67 to 73 with a major championship on the line?

"[Woods] knows how to win these things," Els said. "And it's going to be tough to beat him now."

Bob Harig covers golf for the St. Petersburg Times and is a frequent contributor to ESPN.com. He can be reached at harig@sptimes.com.