HOYLAKE, England -- Tiger Woods couldn't even see the flag,
but he knew his 4-iron was close to perfect. Thousands of fans who
were crammed elbow-to-elbow on a grassy hillock above the 14th
green saw the ball bang into the cup, but they had no idea who hit
it.
Seconds later, when Woods emerged from behind a row of bunkers
and high-fived his caddie, the mystery was over.
The question Friday was whether the British Open was over, too. 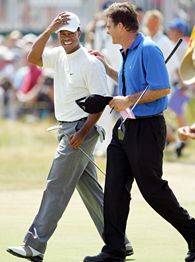