CARNOUSTIE, Scotland -- Often forgotten in the folly produced by Jean Van de Velde is the self-deprecating sense of humor the man possessed, one that would serve him well in the aftermath of his great calamity.

The foolish Frenchman, as he would come to be known, had just secured his place in golf infamy by utterly botching the 72nd hole of the 1999 British Open, then losing in a playoff. More than an hour later, those who watched the debacle still had a hard time believing what they had witnessed.

Now the man whose best hope at immortality had been squandered with a series of blunders and misfortunes had come before those who would tell his tale -- and likely make fun of him in the process. The room was quiet, uneasy. What do you say to someone who was so close to the crowning achievement of his life, only to blow it in such spectacular fashion?

Van de Velde broke the ice with his quip.

"I made plenty of friends because a Scottish man won," he said. "So at least that's something."

"I think it would be an enormous boost. I think there would be a lot of interest.  If I can do something really good, if I win, you never know what will happen. It can be a tremendous boost for me, but definitely for golf in France." -- Van de Velde, after taking the lead with a second-round 68 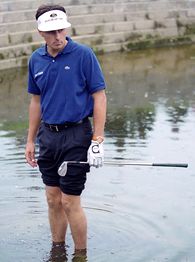 Before that infamous week eight years ago, Van de Velde had done little to suggest he would be a contender. Born in Monte de Marsan, France, he had been the rare child in his country to take up the game, doing so at age 6. By his estimate, there were fewer than 300,000 golfers in France. Van de Velde established himself as a decent amateur player and turned pro in 1987. His only victory on the PGA European Tour came in 1993 in Rome. Only four times previously had he played in a major championship, all at the British Open, where his best finish was a tie for 33rd in 1993 at Royal St. George's.

Van de Velde, then 33, did not even make the 1999 Open field until the Monday before, leading a 36-hole qualifier at nearby Monifieth. It gave him confidence going into the tournament, although that was not apparent in an opening-round 75. Still, that was just four shots off the lead on a brutally difficult day.

The world at large came to know Van de Velde during the second round, when he shot 68, the lowest score of the day and one of just four in the 60s. Rod Pampling, the first-round leader, missed the cut when he followed with 81. Sergio Garcia, 19, shot 89-83 and was in tears. Van de Velde led by one shot over Angel Cabrera.

"My knees are going to touch each other on the first tee tomorrow.  Maybe I'm going to blow it, but let me tell you that I will enjoy. I'm going to force myself to enjoy it." -- Van de Velde, after a third-round 70 gave him a five-shot advantage heading into the final round

On the Saturday evening of an Open that gained fame for its devilish course, Van de Velde was becoming something of a celebrity.

Q: Jean, you seem to be a bit of a comedian; is that pretty much your personality?

Q: Can I ask you about your sponsorship? It is Disney?

A: "Yes, I basically have to test all the rides and go around with the characters."

Q: Jean, what sort of person are you away from golf? What do you like to do in your spare time?

A: "Well, I definitely enjoy my food. I love eating. I love drinking wine. I love skiing."

Q: Were you surprised at all?

A: "Definitely I am surprised to be five ahead. But I'm not surprised with myself."

Q: Am I right in saying you use an unusual putter?

A: "Unusual. Yeah, it is unusual because it goes in."

"Jean, I don't think even Disneyland could have scripted anything like that. Can you take us through this last roller-coaster couple of hours?" -- media center moderator Stewart McDougal after Van de Velde had lost in a playoff to Paul Lawrie

Lost in the madness was the fact that Van de Velde had squandered this five-shot advantage early on the back nine to Craig Parry -- who gave it back with some misadventures of his own. By the time they got to the 18th tee, Parry was just trying to stay out of the way.

Van de Velde had a three-shot advantage, and it appeared the first Frenchman since Arnaud Massy in 1907 would win an Open title.

Then Van de Velde hit a wayward driver off the tee. He got away with it, but everyone was wondering why he would pull such a club. Then he tried to hit a 2-iron second shot to the green, again defying conventional wisdom to play safe. And when the ball bounded off a grandstand, a mistake compounded by a bad break that saw the ball come back 60 yards and into deep rough, a coronation had turned to great concern.

ABC television analyst Curtis Strange called Van de Velde's playing of the hole "stupid," and it sure looked that way when he could do little with his third shot. He hit it into the Barry Burn -- then, incredibly, took off his shoes and socks with the idea of going to play the ball in the water. He instead took a drop, wedged into a greenside bunker for his fifth shot, then got it up and down for a triple-bogey 7 that got him into a playoff.

Standing by, incredibly, was Scotland's Lawrie and American Justin Leonard, who had won the championship two years before. Lawrie, from nearby Aberdeen, shot a remarkable final-round 67, tying for the lowest round of the tournament. He had been 10 back at the beginning of the day. Leonard was kicking himself for a final-hole bogey. But they found themselves in a four-hole aggregate playoff won by Lawrie, who became the first Scotsman to win on his own soil since Tommy Armour had won at Carnoustie in 1931.

Although Van de Velde defended his decision to hit a driver off the tee and a 2-iron for his second shot, he still joked at the end:

"I could not live with myself knowing that I tried to play for safety and blew it. That's not in my nature. I made my choices. I made my decision." -- Van de Velde, less than a month later, at the PGA Championship

Van de Velde arrived in Chicago for the PGA Championship at Medinah without his clubs -- they had been lost on the way. Not to worry. Van de Velde toured the Windy City and was recognized among the skyscrapers by fans. Maybe it was their own experience with sports futility that drew them to him.

He again was asked about his decision-making on the final hole at Carnoustie. "One thing I don't think you can do is play against your nature," he said. "To me, it was in the spirit of how I see the game and how I like to play. To me, that was the shot that was dictated. And so I just played. It's not fun hitting a 9-iron if you can hit a 3-iron on the green. What would you do that for? I mean, I wouldn't do it. I haven't done it."

Van de Velde admitted, however, that the days and weeks after the Open were not as carefree as he often portrayed. Tears were shed, and he once confided to his then-wife, Brigitte, "I had my dream. Why was I so stupid?"

He did feel a warm reaction in France to his failure, receiving messages and letters from around the world. His countrymen, in fact, were thrilled he finished so high. He did receive one letter from an impolite Englishman, which found its way to him despite being addressed to "Jean Van de Velde, southwest France."

The person simply cut out a picture of Van de Velde standing in the Barry Burn, attached it to the envelope and drew an arrow with the words "that's him."

Telling that story was proof his sense of humor was intact. He joked that his sponsor, Euro Disney, should name a ride after him. "I suggested the Jean Splash or Velde Water Chute," he said.

Later that year, Van de Velde returned to Carnoustie to film a commercial for Never Compromise, a putter company. He played the 18th hole using just a putter. And on his third try, he managed to make a 6 -- the score that would have won him the Claret Jug a few months earlier.

The aftermath
Finishing second at Carnoustie did open doors for Van de Velde. It got him an invitation to the PGA Championship that year and a spot on the European Ryder Cup team. It got him into the Masters and U.S. Open the next year. And he had PGA Tour membership the next two seasons.

If the golf gods had a heart, Van de Velde would be back at Carnoustie this week. But he has missed eight of his last nine cuts on the European Tour and withdrew from international qualifying because of an illness for which he has been undergoing numerous tests.

Certainly, it would have been fun to have Van de Velde around, but perhaps he is no longer feeling so sporty about the whole thing. He declined numerous interview requests and at one point was said to be asking for six-figure payments to give them, maybe looking for a different kind of belated glory.

On Monday, he answered questions via teleconference from France, saying that he needed to get his health in order before returning to golf.