Unless she makes the cut, this week's John Deere Classic should be the last time Michelle Wie accepts a sponsor's exemption to play in a PGA Tour event until she becomes the best woman golfer in the world.

This seemingly buzz-killing assertion is made with the full knowledge that there is an undeniable upside to Wie's playing in men's events. Her age, attractiveness and talent make her a bona fide box-office smash. She transforms weak-field tournaments into successful events. She sends positive "no limits" messages to young women and girls. And each time she tries it, there's a chance for the greatest Cinderella story in the history of the game. 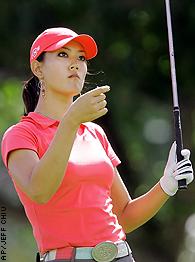 That Wie hasn't won a tournament since the 2003 U.S. Women's Public Links shouldn't be cause for alarm. Her consistently high finishes, particularly in all three of this year's women's majors, validate her dedication to maximizing an ability and technique never before seen in a young woman. Her putting will get better as she gives it more attention. Learning to close out tournaments will probably be the hardest lesson of all, but she's 16. There's time.

But when it comes to Wie competing on the PGA Tour now, the main criteria should no longer be potential or marketability. It's time to ask the simple question, "Does she have enough game?" I say no, and I doubt seriously that she ever will.

At the HBSC Women's World Match Play Championship last weekend, I watched Wie practice near Annika Sorenstam and Karrie Webb. Certainly, Wie hits it longer than either, but the difference isn't as dramatic as her image might suggest. Bottom line, what I didn't see was the kind of ball speed and flight produced by rank-and-file PGA Tour golfers.

While Wie's relative power spelled the difference in her impressive victories over Christina Kim and Se Ri Pak, it was her match against Brittany Lincicome that was most revealing. Lincicome, 20, who led the LPGA in driving distance last season and is averaging 282 yards this year, consistently stayed with Wie off the tee and hit the same clubs from the same distances. It wasn't that Wie lost the match, 4 and 3. It was that Wie's game, often trumpeted as transcendent, was so similar in scale to Lincicome's.

"I don't really understand what Michelle is trying to show," said Lincicome, who has no aspirations to play in men's events. "I play with good men players at home. It's just a totally different game."

It comes down to biology. In the history of big-time professional sports, top-level women have never been able to compete with top-level men. In any sport that empirically measures speed, strength or jumping -- such as track and field or swimming -- men outperform women. When women have attempted to play with men in team sports, such as Ann Meyers and Lynette Woodard in professional basketball, the results only made the case for biology stronger. Pending are the fortunes of Kelly Kulick, the 29-year-old bowler who last month qualified for the PBA Tour.

Many casual observers consider Wie to have a legitimate chance to play with men because they don't consider golf an endeavor in which athleticism matters. They are wrong. As Sorenstam well knows, the place where men's superior strength and speed really make a difference is from the rough and in producing spin on short shots around the green. It's athleticism at a level Wie does not currently possess.

Not that Wie should be barred from trying to play with men. Her army of supporters would grow ever larger if she attempted to qualify for men's events, as she did at last year's Amateur Public Links (where she reached the quarterfinals) and this year's U.S. Open (which she missed by five strokes). The most convincing argument she could make for belonging on the PGA Tour would be to successfully "four-spot," or even better, survive the tour's Q School. Perhaps Kulick will provide inspiration.

Wie maintains that competing against men will make her better. There's a stronger argument that continuing to get into PGA Tour events on sponsor's exemptions will make her softer. As a 16-year-old happy to make the cut, she's in a no-lose situation. It's not good training for being the rich and favored prodigy for whom every LPGA player is gunning. That vibe was palpable at Hamilton Farm. Both the conversations and concessions in all of Wie's matches were minimal, and the youngster's countenance was grim. It seems a high price to pay for pursuing a quixotic dream.

If Wie doesn't make the cut at the John Deere, I hope she'll switch course and petition to join the LPGA Tour. If and when she becomes the best female player, she'll be well-positioned to accept sponsor's exemptions on the PGA Tour. What's more important is that she get on with making history as a champion, not as a novelty.

Jaime Diaz is a senior writer for Golf World magazine