If Annika Sorenstam struggles at this week's Sybase Classic, she won't be pointing to burnout. Sorenstam just had her first weekend off from a golf tournament in years, and it might be more about not knowing what to do with herself.

Did she head home to Orlando on Friday after missing the cut at the Michelob Ultra tournament? Did she stick around to work on her game? Did she travel to New York early for some sightseeing and mind clearing? Did she hole up in a hotel room and assess? 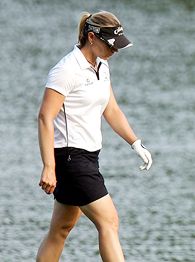 So many questions after the best player in women's golf missed a cut on the LPGA Tour for the first time since the 2002 Women's British Open, a streak of 68 straight tournaments.

For non-majors, the streak was even more stunning. She had not missed a cut at a regular LPGA event since the 1994 Jamie Farr Classic. That was so long ago that Sorenstam had yet to win the first of her 67 LPGA titles.

"I think I'm playing good golf, but nothing is happening," Sorenstam said at Kingsmill. "I'm just not making anything. I really don't know what to say. It's just not going my way at the moment."

Sorenstam, 35, began the year in typical fashion, winning her first tournament at the MasterCard in Mexico. She followed that with a tie for 19th at the Safeway International, deemed a warm-up for the Kraft Nabisco.

There, however, she was barely in contention, never broke 70 and tied for sixth.

Three weeks later, Sorenstam was seemingly on her way to victory at the Florida's Natural tournament in Georgia, where she held the third-round lead after a 64. But she shot a final-round 75 when a 73 would have got her in a playoff and a 72 would have won outright.

A week later at the Ginn Clubs & Resorts Open, Sorenstam again was never really in contention, only finishing fourth after a final-round 67. Again, she blamed putting. And it cost her last week, where she needed 67 putts in two days.

"I haven't seen her like this in a while," said Cristie Kerr, who played with Sorenstam during the first two rounds last week. "Everybody goes through this period of golf, and she's certainly been on top of the leaderboard for a very long time. Golf goes in cycles.

"This year, even though she did win in Mexico, it seems like she's been struggling more than in other years. I've played with her enough to know that something was wrong. She wasn't feeling her swing or reading the putts right or nothing was going in for her. She definitely was not herself."

It is perhaps a bit early to pile on a player who has won eight LPGA Player of the Year awards -- more than anyone in history. She has led the money list eight times. Just last year, Sorenstam played in 20 events and won 10 of them. In 2002, she won 11 times.

Three years ago this week, Sorenstam made history when she competed in the PGA Tour's Colonial. The event drew worldwide attention, and Sorenstam earned a great deal of good will for her effort.

All along, she said the idea was to test herself against the best and use it to her advantage.

Since then, Sorenstam has won 24 times on the LPGA Tour, including five major championships.

How many players wouldn't love to have those numbers for their career?

Sorenstam has been asked repeatedly about chasing Kathy Whitworth's all-time record of 88 victories, still 21 away. At the pace she was keeping, the record was certainly within reach.

But so much has been accomplished, so many tournaments won. Could Sorenstam be slowing down, looking to other things? Is it crazy for those questions to start emerging after one missed cut?

"I'm sure she won't know what to do with herself," Hall of Famer Juli Inkster said after Sorenstam missed the cut. "Annika's set the bar out here. She's been No. 1 in the world for, what, the last gazillion years?"

It would be no surprise if Sorenstam set out to figure out what has been holding her back. She has two major championships coming up, including the U.S. Women's Open, a tournament she hasn't won for 10 years. Nothing gets her more fired up these days than the majors.

And you can be sure the simple fact she is even being questioned will serve as motivation, too.