A birthday celebration is as good a time as any for reflection, and for Annika Sorenstam, you can bet there are forces pulling her in every direction. Enjoy the spoils of success? Strive for more history? Try to mix them both?

Sorenstam turned 36 on Monday and defends her title this week at the Samsung World Championship. How she proceeds from here is good fodder. Sorenstam checks off things from her "to-do" list in golf as if they were chores around the house. And she has accomplished them at such an awe-inspiring rate, nobody would blame her for plopping down in the living room to relax and unwind. 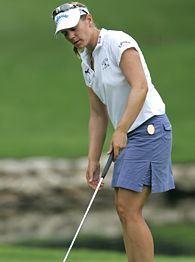 For five straight years, she has led the LPGA Tour money list and won Player of the Year honors. She's run her victory total to 69, her major championship haul to 10. Finding motivation after such success might have been her greatest accomplishment. So, how does she keep going?

"I have to admit, it's been tough for the last two or three years," Sorenstam said during a recent conference call. "I mean, I have achieved so much more than I ever thought I could, and every year I set up new goals and I push myself, what do I want to achieve and so forth.

"What is really driving me is the love for the game, obviously, but the belief that I can be better. I can become a better golfer. That is what keeps me going."

Sorenstam has something else to keep her going this year -- competition.

For the first time since Karrie Webb won the LPGA money title in 2000, Sorenstam is not a lock to capture the top spot so late in the season. With six tournaments to go, she is third on the money list behind Lorena Ochoa and Webb, with Cristie Kerr close behind.

It should make for an interesting end to the season, which will conclude at next month's ADT Championship in West Palm Beach, Fla. There, for the first time, the season-ending tournament will have a new format that greatly will skew the money list.

There are 32 players who will qualify in various ways, with a cut after 36 holes to the top 16. From there, only the top eight qualify for the final day, when they all start over with an 18-hole shootout for $1 million. The runner-up will receive just $100,000, so a lot can happen.

Sorenstam has not been on board with the new format -- she is the defending champion of the event -- but is curious to see how it will play out.

None of it would have mattered in recent years, when Sorenstam cruised to all the top honors. Starting in 2000, she has won a minimum of five events each season, including 11 wins in 2002 and 10 victories last year.

This year, she has just three victories, one of them the U.S. Women's Open in July. She has 14 top-10 finishes, including runner-up in her last two starts. Certainly a productive season, but by her standards

"I have asked myself a lot of questions," she said. "I think it just kind of puts the last few seasons in perspective. This year I have struggled a little bit with my swing, and in the past, I would just go up and I would hit a shot and I would not really think about it, I would not wonder where it was going. This year has been totally opposite.

"It has been where am I going and what am I doing. I have had some great tournaments and some not so great ones and it has been a little frustrating in that sense because I just feel like I not have played up to my normal standard."

And not being one to remain satisfied, Sorenstam decided to go back to basics. In August, she approached her coach, Henry Reis, and said she simply needed to work on her grip, her setup, everything.

"I cannot play with a swing that only works for 14, 15 holes," said Sorenstam. "And if you look at the stats, it is probably the worst year that I have had when it comes to greens in regulation, fairways hit  you name it."

And yet, Sorenstam has those three victories this year, surpassed only by Ochoa's and Webb's four. That gives her 51 wins since the start of the 2000 season -- a number that would rank seventh all time, ahead of Hall of Famers such as Nancy Lopez and JoAnne Carner.

"The golf Annika has played over the last five or six years has been really undervalued," said Webb, who has 34 career wins. "I don't think it's been appreciated nearly as much as it should have. She set such high standards  I find it hard to believe I could sustain that sort of golf over five or six years. But I don't think her golf is unappreciated by the players out here."

And nobody expects Sorenstam to back down.

Yet, what is left to achieve? She is five major victories behind the record of 10 held by Patty Berg. And she needs 13 more wins to tie Mickey Wright (82) and 19 more to catch Kathy Whitworth (88), the all-time victory leader.

"Well, I think about them, but I question [whether] that something I can do.  Eighty-eight wins is just so difficult," she said. "I just wonder how much longer can I play and how much longer do I want to push myself. I have been on tour for 12 years and there are a lot of other interests, projects I want to pursue.

"So now I am just focusing on my own game, trying to get better, and hopefully that keeps me going."