SOUTHERN PINES, N.C. -- If they look up to her these days, it is only because she is tall. Michelle Wie towers over many of the other teenage golfers in the U.S. Women's Open field, both literally and figuratively. But she does not cast nearly as big a shadow.

Perhaps there is a lesson to be learned for the nearly two dozen teenage golfers who begin play at Pine Needles Lodge & Golf Club on Thursday. Wie might have been their role model when she was hobnobbing with Ernie Els at the Sony Open or trying to qualify for the U.S. Open or signing endorsement deals for more than $10 million, but nearly two years into her professional career, she remains winless, her last significant victory coming four years ago at the U.S. Women's Amateur Public Links. Three weeks ago at the LPGA Championship, she finished 10 shots behind her nearest competitor, 35 shots behind winner Suzann Pettersen.

A wrist injury has undoubtedly factored into her recent poor play, which didn't stop the critics from pouncing. All along, Wie's motives have been questioned, her path to professional golf picked apart. The fact that she again said this week that she has not given up on competing against men only makes matters more troubling.

Alexis Thompson isn't talking about playing against men or when she might turn professional. After all, she is just 12 years old and is the youngest player ever to qualify for the U.S. Women's Open. But given her success to this point, the questions are inevitable.

"I would like to have the college experience," said Thompson, who is still six years away from that level of higher education. "Whenever I can turn pro would be great."

Asked if she would like to get into more LPGA Tour events -- this is the first one she is playing in -- Thompson said "that would be great," before adding she also wanted to play in the U.S. Girls' Junior and the Canon Cup, high-profile junior events.

That, of course, is the path Wie avoided, the one that many believe she should have followed. Wie skipped high school golf, didn't play American Junior Golf Association events, stayed away from the high-end amateur circuit in favor of competing in men's events and on the LPGA Tour.

Meanwhile, 19-year-old Morgan Pressel begins play at the U.S. Women's Open as the No. 5-ranked player in the world and one of 23 teenagers (not including Thompson) in the field. She took a more conventional route to the pro game, dominating AJGA tournaments while picking her spots to play against the pros. 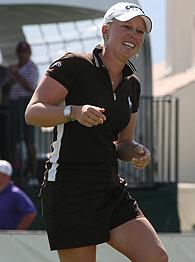 Pressel became the youngest major champion in LPGA history when she captured the Kraft Nabisco in April. She might not have Wie's wealth, but when it comes to golf as a career, she is doing just fine.

"I'm a big fan of the AJGA," said Pressel, who before Thompson was the youngest player to qualify for the U.S. Women's Open, when it was played here in 2001. "I give a lot of credit to the AJGA for their organization and what they do for junior golf and how they help a lot of juniors get scholarships as well as to prepare them for play on the biggest stage in golf. That's why I think there's a lot more girls now who can come out here and really play well at younger ages because the AJGA prepares them so well for that. And it was really a great experience for me. I made a lot of friends and I played well and I competed against some of the toughest fields in junior golf for four years."

Most importantly, Pressel won and won often. She captured 11 AJGA events, including all five of the circuit's invitationals. She learned how to win -- a common knock against Wie.

When Pressel first played in the Open, she was one of just five teens in the field. That number swelled to a record 25 last year, and certainly Wie had an influence on that. She has shown that players can compete at a young age, so more are trying.

But will they follow her path? It depends. Esther Choe, 17, already in her third U.S. Open, has decided to give up a scholarship offer to Arizona and will turn pro in August after her 18th birthday. Vicky Hurst, 17, a runner-up at the 2006 U.S. Girls' Junior, is here and likely headed to college. Some of the teenagers in the field who qualified may never have pro careers.

All of this suggests that to have success as a pro, you'd better start young. Then again, Karrie Webb, 32, a two-time U.S. Women's Open winner who is in the LPGA Hall of Fame, hardly followed that formula. She started playing golf late -- at least by these standards -- but had won her first LPGA title at age 20.

"To me, it's whether you have the natural ability," Webb said. "And then the love of the game to work hard yourself. That's the biggest key. If you're doing it for somebody else, you may start off well in your career, but eventually it's not going to be long lasting. I think you have to have the love of the game in your own heart rather than someone telling you that that's what you should feel.

"That's not singling out Michelle.  There's a lot of young girls out here that I often wonder that, whether they're playing for themselves or playing because that's what they grew up dreaming to be."

Wie has not broken par on the LPGA Tour in her last 13 rounds. She has been the subject of intense criticism, as many simply wait for her to fail. Yet she has all those millions, and plenty of time. And that is a point to remember for all the teenagers in this week's field: She is just 17.