SOUTHERN PINES, N.C. -- Even if you're just a casual golf fan, you know how many major championships Jack Nicklaus won during his career.

But do you know who leads the way among women golfers? Probably not.

Don't worry. You're not alone. Annika Sorenstam was asked that very question at last year's U.S. Women's Open. Her reply? Mickey Wright. More like Mickey Wrong in this case; with 13 major victories, she's only second on the all-time list.

There is no doubt Sorenstam craves majors, but the fact that the game's No. 1 player at the time didn't even know which player she was chasing speaks volumes about where majors rank in the women's game.

That is certainly not to say she doesn't care. Sorenstam, like many players of this generation, has always directed her best efforts toward the biggest tournaments. She has won all four of the big tournaments at least once, including the U.S. Women's Open three times. She has a total of 10 major victories, tying her with Babe Zaharias for fourth place on the all-time list. 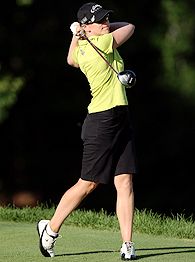 But Sorenstam's lack of knowledge about the situation raises another question: Are the major championships in women's golf as important as they are in the men's game?

"I know for me it was a big deal," said Hall of Famer Patty Sheehan, who is taking in the Women's Open as a spectator this week. "From what I can remember, when I got on tour, winning majors was a big deal. Always was. It predated me.

"I can remember you'd be crazed. To a point sometimes where you didn't think straight. Everything was a big deal. You couldn't relax, take it in and enjoy it. You had to have so much tunnel vision."

But the majors have been more of a mixed bag in women's golf, which probably has led to some confusion. Many top players of previous generations never played in a Kraft Nabisco Championship, British Open or its forerunner, the du Maurier, instead competing in such events as the Titleholders Championship and Western Open, which were then considered majors. The Titleholders was not considered a major after 1972, the Western not since 1967.

Wright won the LPGA four times, the U.S. Open four times, the Titleholders twice and the Western Open three times. But there were several years in her career when just two majors were played.

"As far as we're concerned, we put a big emphasis on the majors," said Meg Mallon, 44, who is trying for her fifth major title at the U.S. Women's Open, which begins Thursday at the Pine Needles Lodge & Golf Club. "Maybe from the outside, that is not the case. For us, it's hard to get the public focused on the other tournaments, which is probably why the majors are so big for us."

Nobody focused on the majors better than Nicklaus, who made it a point to prepare for them unlike any player since Ben Hogan. But did he count them? Nicklaus often has told the story that he didn't realize how many majors he had won until he captured the 1970 British Open. Including his U.S. Amateur titles, he had pulled within three of Bobby Jones.

But before Sorenstam came along, there had been nobody in women's golf who approached double-digit major titles for 40 years.

For all of her success in the game, Nancy Lopez won just three majors and never claimed a U.S. Women's Open. Kathy Whitworth won 88 times on the LPGA Tour, but just six of those victories were majors. Beth Daniel is a Hall of Famer but won just a single major title. Judy Rankin never won a major.

"We had an era which I call the Super Six," Mallon said. "[Amy] Alcott, Daniel, [Betsy] King, Lopez, [Pat] Bradley, Sheehan. There were a lot of majors that had to be spread out in that time period. So it was tough to win one."

You could make the same argument today. In the U.S. Women's Open field, you have Sorenstam with 10, Juli Inkster and Karrie Webb with seven each, Se Ri Pak with five, and Laura Davies and Mallon with four each.

"At a major, all of your senses are heightened a little bit," Webb said. "I think I'm a little bit more excited to play the U.S. Open than a regular LPGA event."

So are most of the players, even if they -- or you -- don't know whom they're chasing.

For the record, the answer is Patty Berg, with 15 major victories. Who knew?