SOUTHERN PINES, N.C. -- Those who see her now and knew her then still shake their heads in amazement. The transformation, in many ways, was bigger than anything Cristie Kerr did in her golf career.

The weight she shed all those years ago was nothing compared to the baggage she got rid of at Pine Needles Lodge & Golf Club, where she captured the U.S. Women's Open by shooting a final-round 70 for a two-stroke victory over Lorena Ochoa and Angela Park on Sunday.

Winning a major championship will do that -- especially when you outduel the game's No. 1 player, Ochoa, and play the final 10 holes without a bogey. 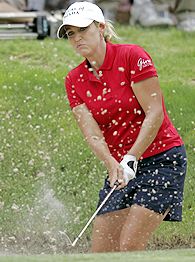 For someone who is just 29, Kerr has seemingly been around forever. She is in her 11th year as a pro, and her play-for-pay stint came on the heels of a highly-decorated amateur career. She turned pro out of high school, struggled mightily, fought and conquered weight issues and finally won a tournament. But she had a reputation for being a poor closer and then -- as she emerged to become perhaps the top American in women's golf -- saw the attention go to younger players such as Michelle Wie, Paula Creamer and Morgan Pressel.

And yet, coming into this week, Kerr had nine LPGA Tour titles and was ranked fifth in the world, the highest of any American. Ironically, she was just a few percentage points ahead of Pressel, who is 10 years younger but already a major winner in her second season.

"This is a long time coming," said fellow tour player and friend Natalie Gulbis, who was in tears as Kerr played the 18th hole. "She's been arguably the top American player for many years. To win the U.S. Open and be an American ... it's the biggest thing you can do as a professional female golfer. And how fitting that she was in red, white and blue."

Somehow, it always comes back to clothes for Kerr. It remains a big source of pride for her to pull out the old stuff that is way too big for someone who is so fit. She was so unrecognizable after losing more than 50 pounds that her own father had to do a double take.

Over the course of two years, the 5-foot-4 Kerr went from 180 pounds to 125. She slimmed down from a size 16 to a 4. And her swing improved, leading to a better game that finally allowed her win her first tournament in 2002 -- her sixth full season on the tour.

Since then, Kerr has gotten steadily better, winning more money each year and piling up nine victories in the past four seasons.

But when it came to up-and-coming Americans, the talk was usually about Wie, Creamer, Pressel and even Gulbis -- who, like Wie, has yet to win a tournament. Combined, they have not won as much as Kerr, who now has 10 career victories. 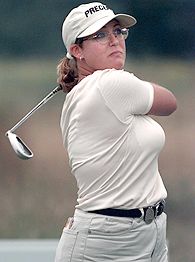 "I don't know if slighted was the right word," Kerr said. "Maybe overlooked a little bit. I know in my heart of hearts who I am and how many wins I have and what I've done. That's good enough for me."

A distinguished amateur career -- including the American Junior Golf Association player of the year award in 1995, victories at several prestigious amateur tournaments and low amateur honors at the 1996 U.S. Women's Open at Pine Needles -- gave her plenty of confidence.

But Kerr's brashness was also a way to hide her inadequacies. Playing golf, a solitary sport, was a way to feel good about herself. "I took a lot of abuse when I was growing up," said Kerr, who heard her share of "Four Eyes" and "Chubby" catcalls because of her weight. Consequently, Kerr developed a tough exterior, and was hardly afraid to tell people how good she was. Winning 22 of her last 25 amateur tournaments helped douse any desire to attend college.

And then she learned just how hard it was to play professional golf. Kerr didn't post a single top-10 finish as a rookie in 1997 and for three years was the youngest player on the tour, which made making friends difficult. Perhaps that is why she tries to help rookies and has been a mentor to Pressel.

A major championship was the next logical step for Kerr, who had nine top-10s in 42 previous majors, with her best finish a tie for second at last year's Women's British Open. Still, after shooting a third-round 66, which she completed Sunday morning, it was the first time she held the 54-hole lead in a major since the 1999 LPGA.

Kerr said the past few years made her feel as if she should win a major, but that she might have started taking things for granted. In the offseason, she got married to Erik Stevens (both Gulbis and Pressel were bridesmaids), put on a few pounds and started the year with four missed cuts in her first seven events.

"I'm kind of reinventing myself all over again," she said. "It's been kind of a wake-up call for me. I've put on seven or eight pounds from when I was most fit. I'll attribute it to being married and on a honeymoon. But I'm ready to get focused on my fitness again and working really, really hard on my golf."