LEMONT, Ill. -- There are more places to sit and see the 18th green, as there are throughout the Cog Hill course. The grandstands are trimmed in a sharp-looking white, a Jumbotron scoreboard is to be enjoyed at the home hole, and huge corporate tents dot the layout.

It has the look and feel of a major championship -- which, ironically, this tournament used to be considered.

A "new era" has dawned on the PGA Tour, and with that came the BMW Championship in suburban Chicago, the third of four FedEx Cup playoff events. The name "Western Open" is gone, but not the consternation -- over the name change, the date change and, next year, a city change.

Makeovers are inevitable in big-time sports, but this remains tough to swallow, even more than a year after the shocking news came that Western would no longer be part of the name and that Chicago would not be the tournament's every-year host city. 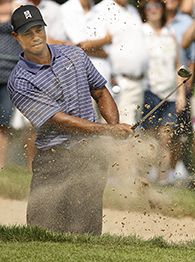 This is an event that dates to 1899, just three years after the first U.S. Open was played. For much of its early existence, the Western Open was every bit the major title that the PGA Championship and Masters would later evolve into. It went on to become the major fund-raising avenue for the Evans Scholarship Foundation, a caddie scholarship program whose namesake, Chick Evans, was a lifelong amateur and the first player to win the U.S. Amateur and U.S. Open in the same year (1916).

And while in its early years, the Western Open moved around the country, it eventually settled in Chicago, one of the country's biggest media markets and a golf hotbed. Every year since 1962, the tournament has been played at one of the Windy City's finest, anchoring at Cog Hill in 1991.

"I didn't like that idea [of moving the tournament out of Chicago]," said Tiger Woods, a three-time winner of the Western Open. "I think this is a great town. It's one of the biggest sports towns, if not one of the biggest markets we have in the country. I just don't understand why we can't play here year after year. People have always come out and supported the Western Open. They've always come out in droves and supported this tournament, and it's unfortunate that we're leaving here."

"That was the toughest decision, really, whether or not we could embrace moving it from Chicago," said John Kaczkowski, tournament director for the Western Golf Association. Kaczkowski also said it was no easy call to drop Western Open from the name. "Our board did not take it lightly. It was a tough decision."

In the interest of full disclosure, back in an "old era" that pre-dates the FedEx Cup by quite a bit, I grew up near here caddying at a place called Inverness Golf Club. Once, I had the honor of caddying in the Western Open at Butler National, back when the tournament allowed the use of only local caddies. And I received an Evans Scholarship to Indiana, a full-tuition deal that still boggles my mind as I type the words today.

So, yes, it's tough to see the name change. It is weird to be here just after Labor Day instead of during the Fourth of July. And it really will be irritating next year when there is no PGA Tour event in Chicago at all.

Kazckowski understands. He's been hearing about it for more than a year. He knows full well about all the negatives that have been discussed, but sees plenty of positives, too.

Tradition, after all, does not pay the bills.

"The main reason we run the tournament is to raise money for the Evans Scholarship program," he said. "That mission is clear. When we look at all parts of the puzzle, we have the support from BMW and being part of the playoffs and moving to different cities like St. Louis and Indianapolis, there will likely be an increase in funds for the Evans Scholarship. We're projecting money raised from the tournament will double."

Proceeds from the Western Open were in the $2-million range, Kaczkowski said. He expects that figure to rise to between $4- and $5-million per year by the end of the six-year deal.

And he noted that while Chicago will be without a tour event next year, 2010 and 2012, some golf-starved areas will get to see the best in the world, which likely will lead to increased ticket sales and more exposure for the Evans Scholars.

"Honestly, that's the big reason why we wanted to be a part of this," he said. "You're looking at a big-time tuition bill. Think of what it costs to go to college these days times 825 kids (who are Evans Scholars). And tuition is rising at 10 percent a year. We don't have any control over it. We've been challenged with how we're going to meet those rising tuition costs.

"We think that being part of the playoffs is really going to enhance the event, elevate it to another level if you will. I'm not saying that the Western Open was a tired event. It was one of many tour events. Now as part of the playoffs, we feel part of the stature has been elevated. We think interest will be high. People in Chicago need to get used to and change their attendance patterns. It's been Fourth of July for a long time. But once they see all the best players, they'll support the event."

Of course, to see them next year, they'll have to head south to St. Louis. Of all the changes to the Western Open, the move out of Chicago every other year rankles the most. Although it moved around the country, the tournament stuck to Chicago in 1962, when it was played at Medinah. It found a permanent home at Butler National in 1974, then moved to Cog Hill in 1991. That's a 45-year run that will be interrupted in 2008.

Yes, Cog Hill will be undergoing a renovation after this week's tournament that offers a convenient excuse for moving the event next year. And in 2012, the Ryder Cup will be played at nearby Medinah, which makes staging another big event in such close proximity a major challenge.

Still ... this is Chicago! City of Big Shoulders and some 10 million or so people in the metropolitan area. It has two major league baseball teams, the NFL and NBA. Somebody said they still play hockey here, too. This week, there's an IndyCar race nearby. But Chicago can't play host to a golf tournament every year?

Something is wrong with that scenario, and it has nothing to do with Bellerive, site of next year's BMW in St. Louis, or Crooked Stick in Indianapolis, which will get the tournament in 2010. If Orlando, Fla. and Atlanta can have two PGA Tour events every year, then the Windy City should not have to go a year without one. And if you're going to move one of the FedEx Cup events around, why not have it be the final one?

Well, for reasons concerning money, of course. Just as financial considerations were involved in moving the BMW, so too, are they the core consideration for the Tour Championship staying in Atlanta, which happens to be the home of presenting sponsor Coca-Cola.

So is the Western Open -- excuse me, BMW Championship -- better off? Grudgingly, ultimately, you'd have to say yes.

But just to be sure, ask me again next year in St. Louis.