Based strictly upon what we already know, this feels like a good time to reiterate that there are a few things most of us would rather not have come out of an athlete's mouth: (1) the suggestion that God favored him over his opponent; (2) all references to oneself in the third person, e.g., "Sergio Garcia knows that Sergio Garcia can spit directly into the bottom of a cup even on a windy day at Doral"; and (3) frankly, Sergio Garcia's spit.

But beyond the basics of Garcia's gag-inducing moment on national television over the weekend, there looms a more interesting -- and much drier -- question: Is this really the upper limit on Sergio?

Bear with me. We'll resist the easy cheap shots that automatically dribble forth (sorry) after seeing Garcia literally spit into the pin cup after retrieving his ball at the 13th hole during the third round of the CA Championship. Let's go with Tiger Woods' succinct summation of the event: Mostly, it was just a golfer temperamentally acting out his disgust at missing a makeable par putt. Stupid, sure. Unhygienic, no question. But it was essentially only a moment. 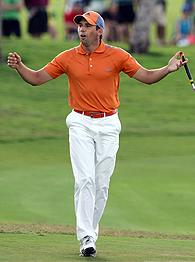 The problem for Garcia, or at least the larger observation, is that this is what his career has become: a series of competent and often elevated rounds of golf occasionally punctuated by a classically childish act. He is a player of inarguable talent and mass appeal who, eight years after turning pro, has not yet even really approached the point of leveraging that talent into a memorable career. And it's very likely that, in Saturday's spit storm, the national TV audience saw exactly why that is so.

And ain't it a shame? The man should be taking on Woods at every stop on the globe. Instead, he's spitting into empty cups. There must be an allegory in there somewhere.

Back in 1999, when Garcia was delighting the galleries at Medinah en route to finishing second to Woods in the PGA Championship, it was easy to see in the 19-year-old the basic elements of greatness. He was a wonderful shot-maker. He seemed to genuinely love the game. He was immature, maybe, but, shoot, give it time. Woods might really have a great international challenger for years to come.

Today? There is no question that Garcia, 27, is a grandly successful pro -- at least in terms of raw results. His tie for third at Doral gave him three top-10 finishes in five PGA Tour starts this season, and he transitions across the continents with relative ease. He makes scads of money. He just doesn't win a whole lot, and, heading into next week's performance at the Masters, he still has no majors to his credit.

For most golfers, that is the kind of criticism they'd be more than happy to absorb -- and no one would begrudge them that. But Garcia is different, if for no other reason than that his early showings suggested he could be so much more. Maybe it was wishful thinking on the part of a golf community that wanted a steady rival to Woods; but Garcia's ability is real enough. It's the part about composure and decision-making that seems to constantly get in his way.

I don't know that any golfer has the talent Woods possesses, but the point is moot, because Woods so completely outworks and outthinks his competition that his talent becomes, if not a secondary issue, at least a less urgent one. Woods has been known to blow up at the occasional camera-toting interloper, but for the most part he's unflappable at the most taut moments of tournaments small and large. You don't have to be able to replicate Woods' bearing in order to want to emulate it a little.

But Garcia just can't seem to get there -- and too bad. He has pockmarked years of solid play with these little mini-tantrum moments: kicking his shoe down the fairway during the World Match Play; storming off the course during a pro-am in Spain after an argument with a playing partner; flipping some unruly fans the bird during the U.S. Open at Bethpage Black in 2002; kicking a sign during a tournament on the European Tour.

Taken individually, they're maybe not so much. It almost feels misleading to lump them together in a single paragraph, because, really, we're talking about eight years worth of golf. But there you are. The golfer in question is Sergio Garcia. The bar is set that high. And maybe we're only now realizing that he isn't going to clear it.

For the sake of the competition, it's easy to wish against that. Garcia, when on his game and focused, can appear to be fully capable of taking it to Woods. His play at the Ryder Cup at least dispels the idea that he can't flourish in pressure situations. And all spit-takes aside, Garcia remains one of the really distinctive figures in the game. He galvanizes crowds. He can make it great fun out there, when he isn't slumping into self-pity or taking the low road to satisfy a momentary flash of anger.

There was a moment Sunday when Garcia had the chance to right himself a little. He'd already finished his final round of 70, which got him the third-place tie at Doral, and someone asked him about the incident the day before. Garcia, who admitted the deed to NBC's Jimmy Roberts on Saturday, could have used the question to his advantage, to show contrition or defuse the situation with a little humor. He chose to play it like a grenade.

"I apologized already," Garcia shot back to the reporter. "Are you embarrassed that I didn't spit today? [Is that why] you didn't have anything better to ask me?"

Here's something better: What if Garcia, great game and all, never does become what so many people thought he could be in 1999? And will that be our fault for choosing the wrong guy, or Garcia's for consistently tripping on his own feet?