If a biography were written about the father of Tiger Woods, the title would
have to be "Earl Was Right."

Earl Woods was right in 1997 when, after Tiger won The Masters by 12 strokes, he said we hadn't yet seen the best of his son. We saw that in 2000 when Woods had one of the most remarkable seasons in the history of the game. Earl was right when he said Tiger would change the way the world looks at golf. Nearly a decade after Tiger turned pro, it is clear he has made the game cool, attracting better athletes to golf and teaching everyone that to be a top pro these days you have to be in shape.

And, most of all, Earl was right in the firm but loving way he raised
his son. He put Tiger on the stage only when he was certain his son was
ready to perform in the spotlight. The ultimate proof that Earl was right
came in the unquestioned love and respect the son had for the father. 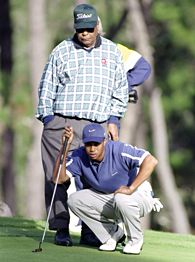 Several years back, when teenagers were just starting to pop up at
professional tournaments in significant numbers, I asked Earl when he knew
Tiger was ready to turn pro. Surely, I said to him, the temptation to
cash in when the kid was 16 (or 17 or 18 or 19) had to have been there. Earl
resisted that temptation because he didn't think it was the right thing to
do. Pops said the revelation that Tiger was ready came at the 1997 British
Open at Royal Lytham & St. Annes Golf Club after his son shot a 66 in the
second round and backed it up with a pair of 70s on the weekend to finish
tied for 22nd place.

The story is well-known that Tiger was introduced to the game when, as an
infant, Earl plopped his son into a high chair and had him watch his father
hit golf balls into a net in their California garage. Earl's theory was to
teach the swing by osmosis. Apparently, Earl was right in this also. Most
importantly, he was right in the way he allowed Tiger's love of the game to
develop naturally, organically. "You can't teach what they feel inside,"
Earl once said. "All you can do is let it come out."

Earl told me that once, when Tiger was a young teen, he had been traveling
and winning tournaments for several weeks. When they got home Pops told son to take two weeks off from golf. "'Play baseball, ride your bike, play video
games, hang out with your friends,' I told him," Earl recounted. Two days
later Earl walked into the living room to see Tiger chipping balls with his
wedge off the carpet over the coffee table onto the couch. Earl let the
passion come back naturally. He waited for Tiger to miss playing the game.
In this, Earl was right.

One of the truly refreshing things about Earl Woods was the way he pointed
Tiger in the right direction while allowing him the freedom to find his own
way.

Pops got the best of everything for Tiger -- best coach, best caddie,
best psychologist, best agent -- and then got out of the way. At Pumpkin
Ridge in 1996, when Woods won his third consecutive U.S. Amateur, Earl was a ghostlike specter who wandered through the trees yards from the fairway, smoking a cigarette and watching his son. It was as if he knew when it was time to take the training wheels off, give the bike a push and see if the
kid could ride. In giving Tiger this space, Earl was right.

When there was an interchange between father and son on the golf course, it
was playful. Early in the week at Pumpkin Ridge, Tiger's drive on a hole
rolled inches into the short cut of rough. As Tiger got to the ball and
surveyed his lie, Earl took a deep drag on his cigarette and yelled: "You
can't call that a fairway hit!"

Tiger shook his head, laughed and said to
his caddie, Jay Brunza, "I knew he would say something." It was part of
jovial banter that made their relationship special. Earl was an enabler,
helping his son develop his special talent. He was demanding but not
suffocating in his direction. In this, Earl was right.

Among all the remarkable things Tiger Woods has accomplished, there are two
images I will forever remember.

The first was after Woods played his first
nine holes at his first Masters as a professional in 40 strokes and then
came back to win by a record 12 strokes. After the final putt was holed on
Sunday, behind the 18th green, Tiger and Pops were lost in a tearful
embrace, celebrating the validation of all they had worked for. The fact
that the victory had come at a club that excluded black members and black
players in its tournament for so long made the moment all the more poignant.

And then there was last year, when Tiger won his fourth Masters. He slipped
into the green jacket, and in his victory speech he dissolved into tears when he
said Pops was too sick to be on hand to share the victory with his son. This
was genuine emotion. This was thanks for a road they had traveled together.

Tiger Woods has done what is nearly impossible in the over-the-top,
overstated, overrated, everything-happening-right-now-is-the-best-ever age
in which we live: He exceeded the hype. Tiger has been better than
advertised. It is a story about a young man with remarkable natural ability.
But it is also the story of a special affection between father and son. That
such a love developed and endured is the ultimate proof that Earl was right.

Goodbye Pops, you did good.