Much in the way baseball fans always will link Ralph Branca's name to that of Bobby Thomson for serving up the pennant-winning home run in 1951, Hootie Johnson will travel through history hand-in-hand with Martha Burk. 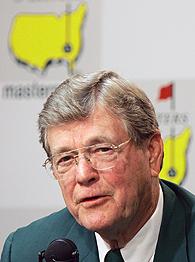 And much in the way Nick Faldo is done a disservice because the 1996 Masters is remembered for Greg Norman's final-round 78 rather than Faldo's closing 67, Hootie will be shortchanged if his legacy is viewed merely as defiantly maintaining the male-only membership at Augusta National Golf Club, where he said Friday that he was stepping down as chairman on May 21.

William W. Johnson brought more change to the world's most exclusive golf club and the game's most popular tournament than any of his predecessors, save Clifford Roberts, who ruled with an iron hand for 42 years.

The announcement by Augusta National that Johnson was being replaced by Billy Payne came the same day services were being held in California for the father of Tiger Woods -- Earl Woods, who passed away earlier this week. The timing of the two carries with it a strange sense of irony. It was at Augusta National in 1997 that Woods, of Asian and African-American heritage, made both a social and athletic statement when, at the age of 21, he won The Masters by a record 12 strokes at a club that integrated only in his lifetime.

What Tiger accomplished that week is akin to what it would have been like if Jackie Robinson had broken the color barrier in baseball in 1947 -- and Babe Ruth's home run record at the same time.

Typical for the very private Johnson, the timing of the announcement shortchanged him. Earl Woods' service and the story that Michelle Wie made the cut in a men's tournament in Korea will likely reduce the inches Hootie gets in the notoriously small Saturday newspaper sports sections, and likely will cut into the minutes he deserves on TV sports programs. Although it is time that will judge the success of Johnson's changes at Augusta National -- and not enough time has passed to fairly evaluate many of them -- it is not too soon to say that, as chairman of a club often unfairly thought of as living in another era, Johnson was bold, visionary and progressive.

Johnson, who made his fortune in banking and was part of the 1960s anti-segregationist forces that integrated the state universities in South Carolina, took over as chairman of Augusta National in 1998 and began to shake things up the next year. First, he eliminated the automatic Masters spot that went to PGA Tour winners, going instead to the money list and the World Ranking. Then he decreed that rough -- a mere 1 3/8 inches the club calls "second cut" -- should be grown and he scrapped the traditional twosomes on Thursday and Friday for threesomes to help with television coverage.

Johnson's most controversial year was 2002. That's when he had the course lengthened to 7,270 yards from 6,925 -- in part because of Woods -- introduced 18-hole TV coverage on Sundays, sent a letter to past champions telling them they no longer had a lifetime invitation and famously told Burk that Augusta National would not open its doors to female members "at the point of a bayonet." He backed down on the letter to past champions, but he never backed down to Burk.

Many felt Johnson was on the path to allowing female members but that he switched directions because he did not want it to appear as if the club was being forced to do so. He made it clear there would never be a female member while he was chairman, a decision that had more to do with pride and principle than with bigotry.

For two years, Johnson ran The Masters without sponsors and without TV commercials rather than expose its corporate partners to possible boycott action by Burk's National Council of Women's Organizations. Ultimately, Johnson outlasted Burk, who stepped down as head of the NCWO last year.

Heading into the 2006 Masters, there was doom and gloom predicted because Johnson's most recent renovation was to push the course back to 7,445 yards, prompting some to say only long hitters could win there now. Instead, the tournament produced a highly entertaining tournament won by long-hitting Phil Mickelson but with a leaderboard not dominated entirely by long hitters.

What does the future hold for Hootie Johnson, now 75? He will become chairman emeritus of the club, play golf and spend a lot of time at his beloved lake house in South Carolina.

And what will become of Augusta National Golf Club? This is an institution with a succession plan that would make any political organization or nation proud. Nothing there is done by accident. By elevating Payne, chairman of the Masters Media Committee since 2000 and head of the 1996 Atlanta Olympic Games, the Executive Committee is giving an indication the club will continue its path to become more open in terms of speaking about changes to the course. It also might mean the club will open its doors to female members, although don't expect that to come too soon, out of respect for Johnson.

There were two Hootie Johnsons -- the abrupt, almost arrogant one the public knew and the funny, thoughtful man people who were fortunate enough to see him behind closed doors got to know. Yes, Johnson said some things to Martha Burk he shouldn't have said, and he later admitted that. If he had a mulligan on the issue, Hootie would have said merely: "It is club policy not to publicly discuss club matters."