Sleeping on a three-stroke lead on the eve of the final round at the U.S. Women's Open is difficult. Not sleeping on one is frightening. By the time Annika Sorenstam got to Pine Needles Lodge & GC the Sunday of the 1996 tournament -- after tossing and turning the darkness away -- she was near panic, haunted by the fear she would replicate Greg Norman's collapse at the Masters eight weeks earlier. But by the time the sun set on the sandhills of North Carolina, Sorenstam had pulled down the shade on a spectacular 66, turned out the lights on a 272 -- the lowest score in U.S. Women's Open history -- and said goodnight to a six-stroke victory for her second consecutive U.S. Open title. After defending her crown with a performance that dominating, who would have thought a decade later she would still be in search of her third Open trophy? 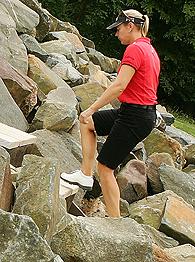 Sorenstam was nearly perfect that week at Pine Needles. She hit 51 of 56 fairways in a driving display her peers still talk about, and the only time she made consecutive bogeys she erased them immediately with back-to-back birdies. Her winning margin over Kris Tschetter was the largest since Amy Alcott won by nine in 1980, and only a dozen players were within 12 strokes of Sorenstam after 72 holes. She was, it seemed, the perfect U.S. Open player, the female Ben Hogan who was expected to surpass the career record of four Open titles held by Mickey Wright, Betsy Rawls, Bobby Jones, Willie Anderson, Jack Nicklaus and Hogan himself. But the lone blemish on the résumé compiled by Sorenstam since she emerged as the one-word "Annika" the last six years is another Open conquest.

"It's really the No. 1 major," Sorenstam said earlier this month as she looked ahead to this year's competition at Newport (R.I.) CC. "It means a lot to me, and I haven't won it in a while." Twice, the championship was ripped from her grasp by the great play of others, first Juli Inkster with a closing 66 at Prairie Dunes CC in Hutchinson, Kan., in 2002, and then Meg Mallon with a final-round 65 at Orchards GC in South Hadley, Mass., two years later. Both times Sorenstam was second. In between, she missed the playoff won by Hilary Lunke at Pumpkin Ridge GC in North Plains, Ore., by one stroke when she bogeyed the final hole, a par 5 she could easily reach in two.

"I've tried really hard," Sorenstam said. "I had two chances where I actually thought I won it, one year with Juli and then with Meg. It's something I have to work on, which is a good thing, and it gets me even more motivated and more excited." Adding to her motivation this year is the re-emergence of Karrie Webb and Se Ri Pak, Sorenstam's longtime rivals who split the year's first two majors. Webb won the Kraft Nabisco Championship and Pak knocked off the Australian in sudden death at the McDonald's LPGA Championship.

Although Pak has to prove she really is back, Webb joins Lorena Ochoa as a legitimate challenger to Sorenstam's run of five consecutive Player-of-the-Year titles. Others to look for on the leader board at Newport are Cristie Kerr, who is playing with new confidence; Paula Creamer, the teen with four victories worldwide in '05 but none in '06; Morgan Pressel, second in last year's Open as a 17-year-old; Mi Hyun Kim and Hee-Won Han, apparently newly motivated by the great play of the younger Koreans; Inkster, at 46, as good as ever from tee to green, and 16-year-old Michelle Wie, who is now a force to be reckoned with in every women's major. Adding to the intrigue is the fact Sorenstam hasn't won since the MasterCard Classic in March, a streak of eight tournaments, her longest dry spell since playing 10 in a row without a win in 2001.

"I'm not playing the way I did last year, no doubt about it," said Sorenstam after finishing T-9 at the McDonald's. "I'm at about 75 percent. I'm waiting for the other 25 percent to show up. I must have misplaced it." Most of that missing 25 percent involves two clubs -- the driver and the putter. She has hit 70.2 percent of her fairways this year compared to 80.4 percent in 2005, falling to T-94 in driving accuracy from 12th last year. Sorenstam has slipped slightly from first in putts per GIR to T-8 this year, but with putts it's not how many you make but when you make them. She has not made those momentum-saving par putts that keep a hot round going.

Her closing 68 at Bulle Rock, which included a very Sorenstam-like run of four birdies in a row, was an indication she finally might be finding her rhythm in an unusual season in which seven Koreans and four Hall of Fame members plus Ochoa and Kerr have won. Newport would be an apt place for Sorenstam to regain her form since the U.S. Open was her breakout tournament.

She first became a winner at the U.S. Open, but the tournament that motivated Sorenstam to become a player now mentioned in the same sentence with Wright and Kathy Whitworth was an Open in which she didn't take home the top prize. It was after an embarrassing missed cut at Old Waverly in 1999 that Sorenstam ratcheted up her commitment to greatness and started on a path of startling success. Since the start of the 2000 season, she has won 49 of her 67 LPGA titles (see chart), including seven of her nine major championships.

"There were a few things [at Old Waverly] that really kind of said, 'This is not what I like, and I know I can do better, and what does it take [to be great], and do I think it is worth it,'" Sorenstam said about her attitude after that missed cut in 1999. "So I had all those questions, and then in the end it was like, 'Yeah, it's definitely worth it, and I know I can do it.' I think it was a big turning point in my career for sure."

Sorenstam's ball-striking at Old Waverly was not that far off. Her 72-74 would have made the cut in every other Women's Open -- the even-par 144 at Old Waverly being the lowest cut score in history by three strokes. The problem that sticky week in Mississippi was her putting. While she ranked second in the field in driving accuracy through the first 36 holes and hit 26 greens, she needed 64 putts and ranked 123rd. And the humiliation of missed three-footers was compounded by the fact it was her second missed cut in three U.S. Opens -- she missed at Pumpkin Ridge in 1997 when she was trying to three-peat. It was time for a new plan.

Sorenstam took a month off from mid-July to mid-August, including skipping the du Maurier Classic, the final major of the year, and set about making changes. She replaced caddie Colin Cann with Terry McNamara, who remains on her bag today. She sought out Dave Stockton to help with her putting and spent one six-week stretch that off-season hitting only putts, practicing an hour in the morning, an hour in the afternoon and an hour in the evening every day.

"When we talked in September [1999] about me working for her, she said, 'You know, I can't make a three-foot putt,' and I said, 'Well, you better fix that,'" McNamara says with a broad smile. That fall, playing an outing for one of her sponsors, Sorenstam crossed paths with Stockton. "I always knew that he was a good putter and had a good reputation, so I said to him, 'Just give me something to work on,' " Sorenstam recalls. Mostly she worked on keeping her head still through impact and releasing her hands toward the hole, hitting six-footer after six-footer in which she would not look up until she heard the ball rattle in the cup. Success did not come immediately. She was 88th, 122nd and 100th in total putts the next three seasons before improving to No. 39 in 2002. The last three years she has been first, second and first in putts per green in regulation.

The second component in her master plan was getting stronger. Sorenstam started her workout program that winter. One year later, after she moved to Orlando, she began a supervised regimen with Kai Fusser, who has worked with, among others, Grant Hill of the Orlando Magic. "When I started to dissect my game, I said, 'If I have a swing coach, maybe I should have a fitness coach. Maybe I should start training like other athletes.' That's really how it started."

The workout has made Sorenstam longer with all of her clubs without sacrificing any accuracy, because she made balance exercises a key part of the program. The work ethic she brought to her physical training was the same one she brought to the practice range. She was relentless. "Her intention was to become an athlete, not just a golfer," said Fusser. "She has never missed a workout. Never. I can't say that about anyone else I have worked with. We have a pile of papers this high [holding hands a foot apart] detailing her every workout. She is just so determined."

The formerly shy Swede -- she took more than a month off after the 1995 U.S. Women's Open so she wouldn't have to face reporters -- now embraces her role as the best player in the game and is much more comfortable as a leader in the women's game. She also has made the transition from someone who was 45th in driving distance in 1999 to fourth last year. Since that 1999 season, Sorenstam has won at least five tournaments every year.

Sorenstam heads to Newport in the midst of a season of disappointment, especially because she has finished in the top 10 in six of the last seven tournaments but not registered a victory. Still, she is approaching the Open with the calm that has marked her career. "I have a pretty good routine of getting ready," she said about her decision not to visit the course before the week of the tournament. "There are times I have gone ahead of time and not done well. I just want to do my normal routine."

Ron Sirak is the executive editor for Golf World magazine