Ask any amateur golfer to choose one course, anywhere in the world, to play one round, and you're likely to hear the words Pebble Beach Golf Links more often than not.

Ask any old-time professional golfer to choose one tournament, other than the four major championships, that means the most to him, and you're likely to hear about the Clambake.

(For the young and uninitiated, the Clambake was Bing Crosby's celeb-riddled event, held every year since 1947 at the golf mecca on Monterey Peninsula, Calif., and more recently renamed the AT&T Pebble Beach National Pro-Am.) 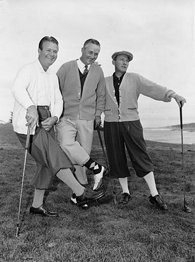 So it stands to reason that this week's PGA Tour event would bring out the best of the best from the golf world, as they convene at Pebble Beach to hobnob with the stars and compete for one of the top titles all season.

Instead, only five of the world's top 20 players will take part in the erstwhile Clambake -- the same exact number that are competing in a seemingly much less prestigious European Tour event halfway around the world in Perth, Australia.

And if it seems like Pebble is losing more participants every year, well, it's true. Kenny Perry played in each edition of the event from 1987 through 2001, but he's skipping it for the third consecutive year. Fred Couples has played in four straight, but he's in Australia, likely grabbing a large appearance fee at the Johnnie Walker Classic.

To what do we owe the displeasure of seeing the beloved Clambake sucked into the vortex of anonymity that is "average PGA Tour events"? There are plenty of reasons:

• Six-hour rounds. Everyone loves it when Bill Murray plucks an unsuspecting 80-year-old woman from the gallery, dances the tango with her in the fairway, then pulls her into a greenside bunker to make sand angels. Everyone, that is, except the guy playing in the group behind him. Not to blame Murray, but the tournament has become less about the golf and more about the schlock. It's really a Catch-22. Fans come to see both golfers and entertainers do their thing, but the more entertaining that goes on, the less golfing there is. With the influx of celebs, CEOs and other lucky dogs competing in the pro-am -- there will be 360 total players over the first three days of competition -- players know they won't be cruising through their rounds in record time.

• Weather or not. Rain and fog delays have often infiltrated this event, but because of the intermittent nature of the climate, it doesn't last long. That means there's bound to be periods during the week when players find themselves sitting on their golf bags in the 10th fairway at Poppy Hills, nibbling on a piece of fruit and wondering whether they should consider skipping the event next year.

• Three different courses. Unlike most PGA Tour venues that are situated at only one course, this tournament takes place on three tracks -- Pebble Beach Golf Links, Poppy Hills Golf Course and Spyglass Hill Golf Course. Granted, they're three of the coolest courses west of the Mississippi, but there's nothing endearing to a professional golfer about teeing off at Spyglass on Saturday after not having seen the course for a full year. The pros aren't big on surprises. If you've ever attended a practice round, you'll see them rolling putts to all parts of the green, planning their strategy for attack throughout the week. With three courses in the rotation at Pebble, that prep work is hardly feasible.

• Anguina nematodes. No, that's not Latin for "CEO with a 25-handicap." They are microscopic worms that have been eating the roots of the Poa annua grass that inhabits the greens of many Northern California courses. As John Strege reported in the Jan. 13 issue of Golf World, course officials "raised the height of the grass on the greens to help reduce stress, which has helped diminish the problem, though it hasn't eradicated it." And in a recent piece written by the San Francisco Chronicle's Ron Kroichick, he quotes R.J. Harper, senior vice president of golf operations for the Pebble Beach Company, as saying: "It's something we've lived with forever, and it hasn't thwarted our effort to put on major events," Harper said. "The unknown is, an outbreak could potentially destroy a green. That's a risk you have when nematode activity is at its highest. ... We're still at risk, no question." There's also no question that murmurs of increased damage to the greens -- they're already noted as some of the bumpiest on tour -- kept more professionals from entering the event this year.

You may not like the reasons. You may find PGA Tour players a bit too fickle when it comes to when, where and how they'll plot their schedule. And certainly not all of them will eschew Pebble Beach this week. Defending champ Phil Mickelson is there. So is Vijay Singh, who won two years ago. As are 178 other professionals. But the tournament still lacks the luster it provided during its heyday, when fans could catch Crosby mingling with Ben Hogan, or Frank Sinatra and Sam Snead enjoying a laugh.

Sadly, that is hardly the case at Pebble Beach anymore.