Former NFL quarterback Mark Rypien once played in the Kemper Open. The Dallas Cowboys' Tony Romo unsuccessfully tried to qualify for the U.S. Open (with Drew Bledsoe on the bag). And Rich Barcelo, who played in the Little League World Series as a kid, is a member of the PGA Tour.

Those are some of the fun ones. But there are plenty of other, more involved stories of athletes from other sports turning to golf midcareer. Greg Garber's story about ex-tennis pro Scott Draper becoming a champion golfer in his native Australia got us to thinking about others who have tried and succeeded.

Let's examine eight other athletes who made the switch from a professional career in one sport to competing for the big bucks in golf: 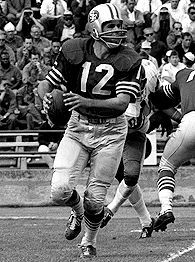 • John Brodie: A quarterback for the San Francisco 49ers from 1957 through '73, Brodie threw for 31,548 yards and tossed 214 TDs in 201 career games. In 1970, he was named the NFL's Most Valuable Player. In 1990, he turned to competing on the Senior PGA Tour with some decent success. He earned a half-dozen top-10 finishes over the next three seasons, including his lone career victory, in 1991 at what is now the AT&T Classic.

• Sam Byrd: An outfielder for the New York Yankees and Cincinnati Reds by trade, Byrd quit professional baseball in 1936 to take a crack at the PGA Tour. Smart move. Although his career on the diamond wasn't too memorable -- he batted .274 with 38 HR in eight full seasons and is known best as the pinch runner for Babe Ruth late in games (earning him the nickname "Babe Ruth's Legs") -- Byrd made more of an impact on the links. He won six tour events between 1942 and '45, including besting Byron Nelson at the Texas Open that final year, when Nelson won 18 tournaments.

• Frank Conner: Along with Ellsworth Vines, Conner is one of only two men to compete in both the tennis and golf versions of the U.S. Open. An All-American in tennis, he supported himself on mini-tours and by instructing others while making the five tries at Q-school it took for him to make his way onto the PGA Tour. Although Conner never won on the PGA or Senior tours, he did triumph at the 1982 King Hassan Open in Morocco and the unofficial 1988 Deposit Guaranty Classic. His hole-in-one at the 1979 PGA Championship is one of 35 in the year's final major since 1970.

• Althea Gibson: Gibson earned acclaim as the "Jackie Robinson of tennis," becoming the first African-American to win a major championship. She would earn 11 such titles in the 1950s alone, but with no professional tennis tour, Gibson remarkably turned to the LPGA in 1964, at the age of 36. She remained a touring pro for seven years, integrating the sport of women's golf, as well.

• Rick Rhoden: In 16 seasons as a pitcher with the Los Angeles Dodgers, Pittsburgh Pirates, New York Yankees and Houston Astros, Rhoden compiled a 151-125 career mark. He was also among the game's best-hitting hurlers, turning that swing into a professional golf career after retiring from baseball. Starting as a pro on the celebrity tour, Rhoden became a part-time member of the Champions Tour in 2005 and played a full schedule last season. He earned $142,714 in 15 starts, including a season-best T-6 at the 3M Championship, leaving him 76th on the money list. He has yet to compete in a Champions event in 2007.

• Ralph Terry: Another former big league pitcher, Terry played for four teams during his career, most notably the Yankees, with whom he won back-to-back World Series titles in 1961 and '62. The latter season was his most noteworthy; he went 23-12 with a 3.19 ERA, though he is best-known for allowing a Series-winning home run to the Pirates' Bill Mazeroski in 1960. Terry later became the first former pro athlete to become a full-time member of the Senior tour, with a career-best finish of T-17 at the 1990 Newport Cup.

• Esteban Toledo: Toledo was a professional boxer with a 12-1 record when he was forced to retire after his appendix burst. He began tending bar at a nearby country club, playing golf on Mondays and, as he says, "I just don't know, I got very good at it." Now a member of the PGA and Nationwide tours, Toledo ranks 190th all-time in career earnings, with $3,606,324.

• Babe Didrikson Zaharias: A three-time All-American basketball player and three-time Olympic medalist in track and field, Babe is widely considered to be one of the greatest female athletes ever. It wasn't until after these accomplishments, however, that she took up golf -- and with equal, if not greater, success. Called "one of the 10 best golfers of all time, male or female," by Bobby Jones, Zaharias won 41 career LPGA events, including 10 major championships (which still ranks fourth on the all-time list).