He is golf's all-time leading major winner, a member of the World Golf Hall of Fame, a recent recipient of the PGA Tour's Lifetime Achievement Award, an honoree of the Presidential Medal of Freedom, the founder and host of this week's Memorial Tournament and

Let's face it: As one of the greatest legends in sports, Jack Nicklaus needs no further introduction. 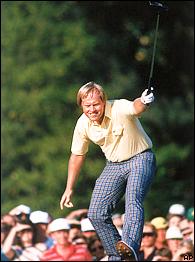 The Golden Bear recently sat down on the ESPN.com Hot Seat to discuss the U.S.'s Ryder Cup woes, the lengthening of Augusta National and, of course, Tiger Woods' pursuit of his most celebrated record.

Q: In a recent ESPN interview, Tiger Woods was asked, "Jack or Tiger?" He responded, "Me. He is the greatest of all time, but you have to believe in yourself." So let me ask you: Jack or Tiger?

A: Well, I would say exactly the same thing. If you asked, am I going to win or is Tiger going to win, I would have to say me, and Tiger would have to say him. If we didn't believe in ourselves, then we wouldn't be thinking much about how good we were or had much self-confidence. That's the only way you can answer that question.

The game today is so different, so nobody will ever know. But Tiger is awfully good, he's terrific, and I guess I wasn't too bad in my time.

A: Well, I don't know. Gary played in my era; Gary knew how I played. Sometimes, somebody else's judgment is a little bit better than your own since you're  too much in the middle of it. I think if you went back and analyzed the games, you'll see that we were about the same length off the tee. I was probably a straighter driver than Tiger. I don't think there was a lot of difference in our iron games. I think Tiger's short game is better than mine. And I think we were both good putters. So, I don't know how you pick the difference.

We would have had a good match, but nobody will ever know.

Q: Do you think it's a foregone conclusion that he will break your major championship record?

Q: You won 18 career professional majors but came in second 19 times. Do you ever sit back and say to yourself, "Man, if only I had won a few more of those"?

A: Not really. Yeah, sure, I would have liked to have won more, but I didn't know I was going to have a Tiger coming along chasing my record. Records were not that big a deal 20, 25 years ago. I remember walking into the press room in 1970, and Bob Green, the AP reporter, said to me, "Jack, that's 10 majors. You only have three more to tie Bobby Jones." That's the first time I ever added them up. That's the honest truth. I never even thought about it.

Jones was my boyhood idol. I knew Jones had won 13, and all of a sudden, I now had a goal. When I broke Jones' record, I was still playing very well, and I won some more.

If I had known a Tiger was coming along, would I have tried to set a record? Yeah, maybe. But, you know, my record is what it is. It stands on its own. Most records are made to be broken. Most people will try to strive beyond a certain point. And that's what Tiger is trying to do. I wish him much luck; I hope I'm the first one there to shake his hand if he breaks my record.

Obviously, nobody wants their records to be broken, but we'll just have to wait and see. I'm looking forward to watching with interest.

Q: Do you think there is too much emphasis being placed on that record right now?