Even after watching the U.S. Ryder Cup team slap it around in Ireland, PGA Tour commissioner Tim Finchem can find reason to test golfers for performance-enhancing substances. Exactly how one would conduct examinations could pose difficulties because if our American heroes had been required to provide urine samples during the September matches, chances are they would have missed the bottle, creating a worse mess than the final score. But something will happen soon, with "soon" being a matter of record. "I will clarify exactly where we are within six months," Finchem said. "Maybe even before year's end."

Unlike virtually every other sport in this nation, golf has no defined policy regarding drugs. Also, golf would appear to be singularly blessed by not having a drug problem. However, that's exactly the line of thinking that prompts critics to accuse Finchem of being naive and having his head buried in a sand trap. 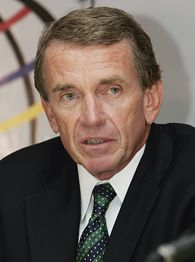 So at next week's tour policy board meeting, he and his people will continue drafting a manifesto Finchem characterizes as "pertaining to specificity." Joe Durant, among four players on the board, sees all merit and no danger in the process. "It's just another way to protect the integrity of our game," Durant said. "I don't think any of that is going on out here, but you can't just assume. My son, Hayes, is 8. Loves baseball. He asked me the other day, 'Dad, is it cheating if guys take drugs to help them hit home runs?' Kids are aware. I couldn't lie to him. So there you go. Let's put it in writing. For our fans, for our youth."

Then again, the very absence of "specificity" is part and parcel of Finchem's authority and always has been. He has unilateral powers other commissioners would kill for, starting with a "conduct unbecoming of a professional" clause in the PGA Tour player handbook. Finchem can fine, suspend or otherwise punish golfers without fear of reprisal from a union because the golfers have none. Every so often, a player might just vanish for a while without explanation. Alcohol rehab? Anger management? Impersonating a writer? Good luck on your fact-finding mission. The tour is very secretive. Without notice, Finchem can do just about anything he wants -- except get Tiger Woods and Phil Mickelson to enter the Tour Championship.

But the PGA Tour wants so dearly to be other sports. Witness its latest affectation, NASCAR envy. So there will be an official drug policy, although there seems scant public outcry for preventive measures. Barry Bonds is under a cloud of suspicion as he chases Henry Aaron's home run record, but baseball just broke its attendance record for a third straight season. Shawne Merriman of the San Diego Chargers just got banished for four games, and everybody yawned because the NFL is king. David Stern, the NBA commissioner, recently opened his season by imploring his players to leave their guns at home. And you think Finchem is under stress to preserve his league's image? Not really, certainly not when his leading man, Tiger, says, let's start testing tomorrow.

So where's the beef? Primarily from the media because it is our duty to make sure all is well in the world. For some reason, most of the pressure is being applied by the Europeans. At a gathering during the WGC-Bridgestone Invitational in August, one of my lodge brothers from across the pond asked Finchem how he could know no golfers are taking drugs if he didn't test them. A fair question. Finchem stressed that golf embraces an honorable culture in which players penalize themselves with no one else looking. That didn't fly with the interrogator. Understand, I have many respected peers in the international media, but I wonder about their drug fixation. I mean, they all spend hours watching soccer. How, I ask, can you come away from a game with a 0-0 result and imagine either side using steroids?

Another persistent voice for drug tests belongs to Dick Pound, a windbag out of Canada who heads the World Anti-Doping Agency. Pound lectures all sports about hygiene, which is odd, for in his former life, he was lapdog to Juan Antonio Samaranch, the doddering little dictator who ran the International Olympic Committee. Nothing is as corrupt and hypocritical as the Olympic movement, but Samaranch's pedigree was perfect, too, because he was a sidekick of Spain's notorious Generalissimo Francisco Franco. "Yes, we have heard from WADA," Finchem said.

Not that the WADA chief is useless. On the contrary, he should work for FEMA. At the first warning of a natural disaster such as a hurricane, FEMA could bring in Pound and give him a bullhorn, and the population of an entire city would evacuate within minutes. On his worst day, Tim Finchem is more believable than Dick Pound. But a list of prohibited substances is pending, so by the 2008 Ryder Cup, there will be no hidden meaning when U.S. captain Paul Azinger talks about improving team chemistry.

Bob Verdi is a senior writer for Golf World magazine.