Yes, yes, yes, Michelle Wie should have the chance. That isn't the issue. As Jack Nicklaus was just saying: If you've got the game -- man, woman or child -- come on down and give it a shot for the U.S. Open. 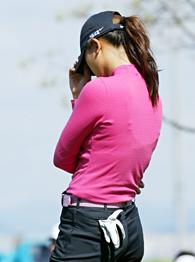 In the end, this isn't about the rights of the kid but about the responsibilities of the grown-ups to protect a prodigy for the long run.

That she has the talent to make the cut in the U.S. Open sectional qualifier on Monday in Summit, N.J., isn't as much the concern as whether the ramifications of success and failure are worth the risk to a 16-year-old's psyche. Just because Wie looks older and plays and carries herself beyond her years doesn't change the fact that her family has pushed far too fast, too soon with her career.

Monday's qualifier is just another example.

B.J. Wie, the father, behaves as though there's an expiration date on his daughter's talent. Sometimes it sounds too simple, but it's true: What's the rush? Worst of all, what's the reward when the risk to a talent we've never witnessed could be so traumatic?

LeBron James could've played in the NBA as a high school junior, but it wouldn't have been a good idea. Tiger Woods could've made cuts on tour when he was wearing a Stanford golf shirt. Looking back, they probably both would tell you they're glad they didn't have to take on so much, so fast -- even if they are generational talents.

Wie keeps cutting an unprecedented path because her talent allows for it. When that replaces common sense and good judgment as the barometer, you're throwing a young athlete into harm's way

The golf isn't going to be the problem for Wie. It's everything else around it, beginning Monday morning with a carnival at Canoe Brook Country Club, a sectional qualifier to get her to the U.S. Open at Winged Foot. If she were to get there, and it's a big if, what a spectacle of epic sporting proportion that would be.

Great for golf, I guess. For a 16-year-old, don't be so sure. Pass or fail, what assuredly will come with all this for her is a resentment on the men's and women's tours, two worlds of pros that will be slow to embrace her. That's life. That's human nature. And that happens with the prodigies in everything, but to expose her to all of this now, asking Wie to take on what will come with success and failure now, is sure asking a lot. And for what?

This is a hell of a burden for the biggest and best golf ever has developed -- let alone a kid still waiting to get her driver's license.

B.J. Wie should be controlling the pressure on a young teenager, sculpting a path on the LPGA Tour that would build the momentum and maturity to make a well-calculated, well-prepared move to the men's side. In the end, it keeps coming back to this question: What's the rush? Just because she has the power and precision to play with the big boys doesn't mean it's a good idea to thrust her into one of the great gallery and media firestorms this sport has ever witnessed.

Again, the father treats his kid's prodigious talent like that of a teenage tennis player with a limited window of dominance, or worse, like that of a gymnast who'll never see a championship day past 21. Even if she misses the cut on Monday in Jersey, where there are 150-plus credentialed media and thousands of fans showing up for what was a nonevent until she qualified, a poor performance will leave her answering more and more of those questions about "falling short" and "disappointment." Those are the kinds of labels that start to stick when you're shooting for the moon and fall short, even if the goal is astounding.

That's the danger. The Wie machine is indulging the part of our sport and society that loves to see everything done younger, faster and sooner. This is the "Now" culture, and she's making herself the "Now" athlete. Here's the problem: The 16-year-old who keeps dragging all the cameras and sportswriters out to the U.S. Open qualifiers and men's tour events where she has been exempted into the field is going to become the 17- and 18-year-old never afforded a chance to develop and grow into a player who can make the cut in these tournaments.

She'll start to feel everyone else's impatience with what should be a gradual process for her, listening to everyone chip away at her own belief, her own confidence. That's life as a big-time athlete. Annika Sorenstam was a grown-up when she tried to make the cut at the Colonial a few years ago. She had the years, the perspective, the understanding, to withstand all the scrutiny and second-guessing that comes with crossing over in golf.

Wie is 16 years old. She's just a kid -- no matter how much B.J. Wie and her coach try to keep telling everyone about her composure and resolve. To thrust her onto the LPGA Tour as a teenybopper was one thing, but to enter into this arena, where even if she plays great golf and hangs with the big boys, it won't change the truth that we'll be left to wonder what price is still to be paid by Michelle Wie.

Adrian Wojnarowski is a sports columnist for The Record (N.J.) and a regular contributor to ESPN.com. He can be reached at ESPNWoj10@aol.com. His book, "The Miracle of St. Anthony: A Season with Coach Bob Hurley and Basketball's Most Improbable Dynasty," is available in paperback.