Stanford University likes to think of itself as the Harvard of the West, and perhaps rightly so. No doubt it is a demanding academic institution and a freshman in her third week of school is just as certainly overwhelmed by the adjustment from high school to college and frantically trying to figure out how to handle the enormous workload.

What's a girl to do? Well, in Michelle Wie's case it's to play the Samsung World Championship on the LPGA Tour.

Wie turns 18 years old on Oct. 11. That's also the day the Samsung starts at Bighorn Golf Club in Palm Desert, Calif., which is not exactly right next door to Palo Alto. Let's bypass the issue of skipping school to play in the tournament and focus instead just on the matter of how Wie got into the Samsung in the first place. She must have earned her way in, right? Wrong, despite the fact that it's a field of only 20 players, making it the most difficult event on tour for which to gain entry. 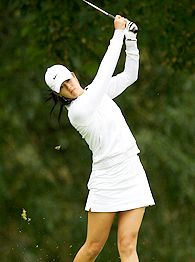 The good folks at Samsung, so determined to be one of the six sponsor's exemptions Wie is allowed to take each year, threw their lone available invite at her on May 15 -- before she had ever hit a shot in a competitive LPGA event this year. What they didn't know is that Wie's performance in 2007 would not only remotely justify a sponsor's invite to the Samsung, it likely will not attract any additional fans, either.

In seven LPGA events this year, Wie has missed the cut three times, withdrawn twice and finished 84th and T-69. In 15 LPGA rounds, her stroke average is 76.73 -- and that doesn't include when she withdrew at the Ginn Tribute while 14-over-par through 16 holes and quit early again at the U.S. Women's Open while 7-over after nine holes of the second round. But more embarrassing for the Samsung -- and the LPGA -- than giving Wie a freebie into the tournament is whom her presence kept out.

Actually, this gets even better. The Samsung tournament is run by International Management Group, the super agency that directs the careers of Tiger Woods and Annika Sorenstam, among dozens of other players. IMG made a bid to be the agent for Wie but stepped aside and let the William Morris Agency -- a Hollywood management firm -- take the account because the Wie family demanded financial guarantees regardless of performance. That was not a promise IMG was willing to make.

So Samsung -- and IMG -- gave Wie the sponsor's invite in May and then watched in horror as her game imploded. At the same time, Sorenstam struggled back from a serious injury and is currently authoring her first winless LPGA season since 1994. When the cutoff date to qualify for the Samsung came along, Sorenstam had not earned her way in. Having already committed the event's lone exempt spot to Wie, tournament organizers did the only honorable thing -- they made up the rules as they went along.

To get Sorenstam into the field, tournament organizers created an exemption for "an active Hall of Fame member." Well, that certainly describes Sorenstam. Only problem is that it also describes Karrie Webb and Juli Inkster -- both of whom are higher than Sorenstam on this year's LPGA money list and are arguably more deserving of the newly created spot. Realizing this, Sorenstam behaved as the class act that she is and declined the spot.

The spot that would have gone to Sorenstam then went to the player next in line on the LPGA money list, which happened to be Sarah Lee. Now, the person who really gets burned by the Wie exemption is Natalie Gulbis who, if Wie were not in the field, would have gotten the spot as next on the money list behind Lee. So a player who won this year and is one of the best box office draws on tour gets knocked out of the tournament by a player who has not finished better than T-69. Anyone want to explain that to me?

Here is the other thing that makes this all a little awkward: Wie is no longer the 14-year-old phenom. On Wednesday she becomes just another 18 year old -- and 18-year-olds are no longer a rare commodity on the LPGA. An 18-year-old -- Paula Creamer -- has already become the youngest player to win a multiple-round LPGA event, taking the Sybase Classic in 2005. And another 18-year-old -- Morgan Pressel -- became the youngest to win a major at the Kraft Nabisco Championship earlier this year.

And there are more kids in the pipeline. One of the first stages of LPGA Q School this year was won last month by Ya-Ni Tseng, who is the same age as Wie, hits the fall even farther than Wie and defeated Wie in the finals of the 2004 U.S. Women's Public Links Championship. There are already eight teenagers who have LPGA cards, including Pressel and this year's likely Rookie of the Year, Angela Park.

Wie is no longer a novelty. She is now just one of many talented young women playing professional golf. Any reward that she receives from here forward should be earned and not given. It makes absolutely no sense that a tournament in which there are only 20 spots has a player in the field whose last victory -- in fact, only victory -- came more than four years ago while three deserving Hall of Famers and another bona fide star are shut out.

The LPGA, Stanford and even Wie would be better served if this particular teen were in a classroom this week instead of on the golf course -- exactly where all new freshmen are.