PORT ST. LUCIE, Fla. -- The snowbirds have yet to flock to Florida for the winter, which might be one explanation for the rather sparse turnout this past week at the Ginn sur Mer Classic, the penultimate tournament on the 2007 PGA Tour schedule.

Come to think of it, birds of just about every species could have had their way at the Tesoro Club the past few days; there was plenty of room to roam around the massive complex chosen to host one of the Fall Series events.

Perhaps the real reason for the lack of excitement is the lack of big-name players. Not a single golfer ranked among the top 40 in the Official World Golf Ranking teed it up, and just nine of the top 50 are expected at the final event of the season, the Children's Miracle Network Classic at Walt Disney World, which begins on Thursday.

Dubbed the Fall Series, the final seven events on the PGA Tour schedule will mercifully come to an end next week in Orlando, where the biggest stories will revolve around players losing their full-time status (despite making $700,000 this year) or secure veterans who try to fit in golf around visits to the Disney theme parks.

"There were 100 people following the final group last Sunday in Scottsdale," said PGA Tour veteran Steve Flesch. "It's like a glorified club championship. I don't think that's what the tour intended. And I think they need to address it." 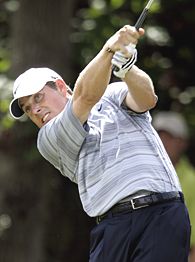 We probably shouldn't have expected much more, especially after all the hype surrounding the first year of the FedEx Cup playoffs, which ended in mid-September. For many, it remains difficult to grasp a concept that has the tour season supposedly ending at the Tour Championship and yet continuing with seven more tournaments that still count. Sort of.

"I had a pro-am partner ask me how many FedEx Cup points there were at this event. I said, 'None.' He said, 'None? I thought that's what the whole deal was?' Exactly. They need to do something. A lot of the players are frustrated. What's killing us is there is no buzz at the end of the year. We don't have any of the top 30 guys playing. These are good players, but those guys are the draw. Phil [Mickelson] played last week [at the Fry's Championship], but that's about it. It's frustrating to me, because I think these Fall Series events have some value."

When the PGA Tour drastically revamped its schedule and decided to "end" its regular season with a playoff format that culminated at the Tour Championship, the idea was to have a meaningful conclusion to the year that did not have to compete with college and pro football on television.

The system was not without its flaws, but it did produce high-quality golf and fields stacked with the best players in the world. The fact that Tiger Woods won two of the four events, Mickelson won another and Woods walked away with the overall title did not hurt.

But the tour is not just about the stars. There are 200-plus players with full or partial status, and they can't all qualify for the various major championships, World Golf events and playoff tournaments. So although it would have made perfect sense to simply end the season after the Tour Championship, the rank-and-file would have cried foul. And what about some of these late-season events, such as Las Vegas, the Texas Open and next week's tournament at Disney? They've been around for years. In fact, the Texas Open manages to thrive in the fall and is typically among the tournaments that give the most to charity.

So in an effort to appease, the tour came up with the Fall Series. Although the FedEx Cup points were frozen, the money earned in these events still count on the 2007 money list. Players can fight for their playing privileges, perhaps move up high enough to get spots in the invitational tournaments (top 70 on the money list) or even finish high enough to garner a Masters invitation (top 30).

"It's a slap in the face to some of those events to almost label them B-class events," said Daniel Chopra, who won the Ginn sur Mer Classic on Monday. "Disney's been around for years. Vegas has great history at that event. ... We need to do something because these sponsors are putting up a lot of money, and the tournaments are not getting the respect they deserve."

What are the solutions?

"We have talked about, for the events in the fall, maybe the thing to do is to award points for the next year, give guys an incentive to play," said Joe Durant, a member of the PGA Tour's policy board who will defend his title this week at the Disney tournament. "It gives these tournaments something extra. These are still good tournaments. Even if they awarded points like they did at the oppose events this season, by giving half the regular points, anything is better than nothing. I don't see a negative."

Some have gone so far as to suggest that perhaps the Fall Series events should simply be the start to the following season. "Other sports don't necessarily follow the calendar year," said Matt Kuchar. "Their seasons overlap. We could do the same thing."

That is what happens on the European Tour. Less than two weeks after the 2007 season ends this week in Spain, the 2008 season will begin in China.

Then again, the idea behind the entire FedEx Cup schedule was to shorten the season so the big names would be in the same tournaments more often. And what's to say FedEx Cup points would even attract them?

"I really don't think there is anything they can do," said Mark Calcavecchia, one of just two players, along with Robert Allenby, ranked among the top 50 in the world who teed it up at the Ginn tournament. (Both missed the cut.) "For all those guys, with the World Golf events, six out of nine weeks ... I guess losing interest might be a good [phrase]."

In truth, it's the fans who are saying so. At the Frys.com Open in Las Vegas a few weeks ago, general admission was just $5, and yet estimates put attendance for the week at less than 11,000 spectators. In Scottsdale, Ariz., at the Fry's Electronics Open, less than 30,000 attended for the week, with just over 5,000 at the final round. Remember, this is a market that traditionally attracts more than 100,000 spectators on a single day to the FBR Open.

All of the events are on the Golf Channel, because the PGA Tour knew it was fruitless to put golf events on network television during football season.

Yet it would be hard to argue these haven't been good tournaments. Flesch won his second event of the year when he won at Turning Stone and now is in position to earn a Masters invite by finishing among the top 30 money winners. Three players who once were ranked among the top 10 in the world -- Chad Campbell (Viking Classic), Justin Leonard (Texas Open) and Mike Weir (Fry's Electronics) -- have won tournaments. George McNeill, who won in Las Vegas, was last year's Q-school medalist.

The bigger question: Does it matter if nobody notices?

"Beyond five years, we're going to be in trouble with the fall events," Flesch said. "If there is no value other than the money or the money list next year you're really going to turn off some sponsors and a lot of viewers."