Dwight D. Eisenhower, the 34th president of the United States, followed a precise protocol at Burning Tree Country Club. He would take a dozen or so practice shots off the first tee and, when he felt properly warmed up, point to the one that had flown farthest and straightest and say, "I'll take that one."

Another example of executive privilege: any putt inside three feet (and sometimes longer) was a gimme. The Secret Service shagged any wayward slices into the woods guarding the fairways. Ike spent so much time at "The Tree" that a hotline was installed between the White House and the pro shop. One weekend in 1952, it is said, leading Republicans approached Eisenhower at Burning Tree and lobbied him to run for president.

Set on the western edge of the District of Columbia, in suburban Bethesda, Md., Burning Tree is 244 exquisitely manicured acres and fewer than a dozen miles from the epicenter of the nation's capital. The club opened in 1923 after, the story goes, a male foursome from the Chevy Chase Country Club was stuck behind a slow-playing group of female golfers.

During its salad days in the 1940s, '50s and '60s, Burning Tree reeked of political power. Presidents were extended honorary membership and many accepted: Franklin Roosevelt, Eisenhower, John F. Kennedy, Lyndon Johnson and later Richard Nixon, Gerald Ford and George Herbert Walker Bush (along with his impressive 11-handicap). Supreme Court Chief Justice Warren Burger played at Burning Tree, as did House Speaker Tip O'Neill. William Randolph Hearst was a member, too. Even after Edward R. Murrow was informed on the 10th tee that the Japanese had bombed Pearl Harbor, the veteran journalist played on.

Today, easing into its 81st season, Burning Tree Club is a timeless place. That is to say, the past is omnipresent. There is a faded, sepia-tinged tone to the grounds; the antique clubs of famous men are displayed on the walls. The attitudes and prevailing world view are of a different time as well.

Burning Tree, you see, is an all-male organism, the classic old-boy, blue-blood men's club. The initiation fee is $75,000 and membership -- capped around 600, including honorariums and golfers past their playing days -- is by invitation only. The membership list never has been made public. But if you are a woman with the financial goods and the game, forget about it. 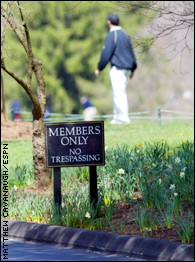 When Sandra Day O'Connor became the first woman ever appointed to the Supreme Court in 1981, she ended a streak at Burning Tree; previously, Supreme Court justices had always been extended honorary memberships to the club. Despite her polished 12-handicap, cultivated on the challenging layouts in Scottsdale, Ariz., O'Connor never crossed the threshold.

Burning Tree in the new millennium has lost much of its political capital. Sitting presidents no longer play there. Senators John Warner (R-Va.) and Don Nickles (R-Okla.) are among those that pass for the club's high-profile members, along with CBS newsman Robert Schieffer, Motion Picture Association chief Jack Valenti, television personality Bryant Gumbel and Supreme Court justice Antonin Scalia. Most of the members are more anonymous lawyers, lobbyists and businessmen. The club, not surprisingly, tends to attract more Republicans than Democrats.

Somehow, Burning Tree has flown under the radar of the women's groups who have protested the all-male membership at Augusta National, home of this week's Masters golf tournament. Martha Burk, chairwoman of the National Council of Women's Organizations, suggested that Augusta holds more influence and is, therefore, a more viable target.

"In terms of the real power centers, corporate America, Augusta is, as they say, where it's at," Burk said last week from her Washington office. "Burning Tree functions mostly as a local golf club. The fact that members of Congress play there ... it's a local club right down the street. It's not like it's some national icon."

But, she added, "Membership at Burning Tree is becoming less and less acceptable."

Charles Briggs is the club's general manager. He listened politely last week when asked why Burning Tree had not been challenged recently by women's groups. There was a long pause.

"We have no comment," Briggs said evenly. "Sorry about that. We both have jobs to do, and this is a good one for me. No comment. That's our answer."

'A great day-care center'
Beyond the no-women membership policy, women are not even allowed on the grounds as guests. For many members, Burning Tree functions as their second or third club so they can socialize with the opposite sex at other golf venues.

Even a few hours after a splashy press conference, Rep. Carolyn Maloney (D-N.Y.) was still amped. Winding into her seventh (or eighth) paragraph about the insidious nature of all-men's clubs, a reporter tried to wedge in a word edgewise.

"I haven't finished my thought," Maloney continued last week from her Washington office. "I think it is wrong. Some of our colleagues are members of these clubs and they should be pushing to change their policies. If the major national leaders of this country don't understand that belonging to these clubs is wrong … it sends the wrong message about values of discrimination and fairness."

While the press conference, attended by the now notorious Martha Burk of the National Council of Women's Organizations, was aimed at Augusta National and this week's Masters golf tournament, the House resolution introduced by Maloney and 14 co-sponsors also applies closer to home: Burning Tree Club in Bethesda, Md.

The non-binding resolution calls on top federal employees -- those in Congress as well as the executive and judicial branches -- not to join private clubs that discriminate on the basis of race or gender. Neither Augusta National nor Burning Tree were named in the wording of the resolution but it is well known that Amo Houghton (R-N.Y.) is a member at Augusta National and Senators John Warner (R-Va.) and Don Nickles (R-Oklahoma) are members at Burning Tree.