AUGUSTA, Ga. -- Yes, this one was for Lefty, the supposed new people's choice. It was for Vijay, the late, great world No. 1. It was for Johnny Miller, who said Tiger Woods' best days were in the past tense. 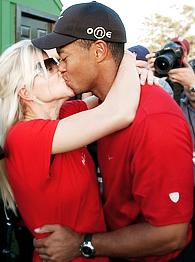 It was for Butch Harmon, Woods's discarded instructor. For every talking head and writing hack who kept a running count of El Tigre's major winless streak. For anybody and everybody who forgot that red and green still go together.

But these were the critics, the doubters. When Woods grinded his way to his fourth Masters championship in the long shadows of an early Sunday evening, his immediate thoughts focused not on the non-believers, but on an old man sitting in an Augusta rental house.

"This one's for you, Pop," said a misty-eyed Woods moments before slipping on his favorite piece of golf attire -- a green Masters jacket.

Pop, of course, is Earl Woods, the former Green Beret who raised a golf prodigy. After each of Tiger's three previous victories here, father and son would embrace just off the edge of the 18th green. You didn't need a course in body language to understand the depth of their love.

This time, after Woods defeated the human sweater lint known as Chris DiMarco in a sudden-death playoff, there was no Earl waiting with arms outstretched. Diabetes and a fragile heart kept the old man in front of a TV set rather than at Augusta National.

So it was little surprise that Tiger mentioned his absence first during the jacket presentation at Butler Cabin, then at the formal ceremony on the course, and then during the news conference. Each time, he lost a playoff to his tear ducts.

"He wasn't there today," said Woods, revealing his emotions to the assembled patrons and tournament officials. "I can't wait to get home to see him and give him a big bear hug."

And then he pinched the bridge of his nose, trying unsucessfully to prevent a cry-fest. Fat chance -- not as the adoring crowd showered him with applause. Mothers everywhere wanted to cook him a hot bowl of chicken soup.

No one will remember Woods's victory as an artistic triumph, but they will remember it. How could you not? It had All My Children drama, a Larry Mize-r for the ages, and a one-hole playoff.

By Sunday's end the leaderboard featured four Masters champions (Woods, Phil Mickelson, Vijay Singh and Mike Weir) and one U. S. Open winner (Retief Goosen). But only Woods and DiMarco had done a Lance Armstrong and separated themselves from the pack.

But here's the thing: DiMarco is more clingy than a chihuahua on a pair of postal carrier's pants. DiMarco has never won a major, but he will. Yeah, his swing is right out of Popular Mechanics, but you can't question his nerve. Woods didn't.

Had DiMarco left here with his own green jacket, no one would have complained. But for so many reasons, this was more Tiger's tournament than his.

But that's what makes Woods so human. He screws up big. He recovers big.

If you haven't seen his chip on the par-3, 16th hole, you will -- about a million times. All he did was bump the ball onto the granite-hard green, and then watch as it rolled to cup's edge, hang there for a full three seconds, and drop into hole. Maybe it was the weight of the grass stain on the ball that made the difference. Maybe it was the karma of an old man sitting in a rental house.

"Under the circumstances, one of the best [shots] I've ever hit," he said later.

So what happens next? Two more screw-ups. Woods bogeys 17. Then 18. We've got a playoff.

In the pre-drought days, Woods would have left cleat marks on DiMarco. But this is the new and still evolving Tiger. He was wildly and wonderfully inconsistent ... and he still finished 12 under for the tournament, still finished seven strokes ahead of the third-place group, and still delivered clutch shots when he absolutely had to (hello, 15-foot birdie putt on the first and only playoff hole).

I like this flawed Tiger. I like that he stuck a Nike sock in the mouth of Lefty's Loonies and Johnny Miller. I like that Vijay and Tiger are playing tag with the No. 1 ranking. I like that we can quit with the, Oh-my-gosh-Tiger-hasn't-won-in-10-whole-majors.

"Ten majors is not really that long," said Woods. "Some guys go oh-for-life."

This is true. But Woods isn't some guy. He's the prodigy all grown up. He's a phenomenom. He's halfway to Jack Nicklaus's record of 18 pro majors.

Gene Wojciechowski is a senior writer with ESPN The Magazine. His book "Cubs Nation: 162 Games. 162 Stories. 1 Addiction." will be released by Doubleday on April 12, but can be preordered now by clicking here.