AUGUSTA, Ga. -- The question can be innocuous or contemptuous. It can reek of cynicism or confusion. It can be complicated and perplexing. It can be frank and unvarnished. It can be interpreted existentially, philosophically, factually.

Zach Johnson was faced with this query Sunday night, the green jacket framing his shoulders after he was declared the newest champion of the Masters Tournament. He sat up in his chair, looked straight ahead and pondered those three little words.

How would you answer? What would you say? How much would you reveal? It can be maintained that a person's response to this query says everything about him. With hundreds of eyes looking his way, eager with anticipation, Johnson considered what it would say about him. 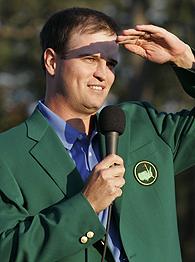 Perhaps he would discuss his upbringing. "I'm just a Midwest boy from Iowa," he had earlier told the packed-house crowd gathered for his green jacket ceremony. Indeed, he is. Born in Iowa City, raised in Cedar Rapids -- a Hawkeye through and through.

Johnson was an active kid from an early age. "I played every sport you can imagine," he said, "and I probably liked some other sports maybe even better at times."

He began playing golf at age 10. Got pretty decent. Attended Drake University on a golf scholarship, but figured he'd need to fall back on that business management/marketing degree before too long. Play professionally? Try to join the PGA Tour someday? Sure, it seemed like a nice idea, but was he good enough?

"I didn't know if I was, personally," said Johnson, 31. "I was backed by a lot of people. I was persuaded to give it a shot. You know, I really didn't want to go back to school. I really didn't want to get a job. The one thing that I kind of clinged to was the fact that every year, as a junior in high school, and then in college, I improved, and I felt like, you know, if I can get the necessary finances down, I'm going to give this a shot for two or three years and see where things go. And if I keep improving, then we'll see how far it takes me."

Maybe Johnson would look to this part of his life for the response to the question. The roots. The early years. How his professional golf career was conceived.

He joined something called the Prairie Tour, the equivalent of Class A minor league baseball, barnstorming his way through the Plains states -- about as far from a green jacket as a professional golfer can be.

"My first event was in Lincoln, Neb.," Johnson recalled. "I played in Bellevue, Neb. I played in Lawrence, Kan. Where else have I played? All over the Midwest, down into Missouri."

He could talk about the journey. About working his way from one rung of the mini-tours to the next. After the Prairie Tour came the Hooters Tour, where -- believe it or not -- actual Hooters girls would present you with a trophy if you won a tournament.

"I thought those were the best days of my life right there," he said. "Chicken wings and everything. But that's how I got better. Those mini-tours, a lot of good players have come through the ranks there. I feel very fortunate to have played in those tours."

He continued climbing those rungs. Won twice on the Nationwide Tour in 2003, earned a promotion to the PGA Tour, then -- wouldn't you know it? -- went out and won the BellSouth Classic in April of that year. The kid from Iowa who not that long ago had questioned his own talents was now a huge success on the world's biggest stage.

Johnson didn't win again, but he progressed as a player. He was named to the U.S. Ryder Cup team, developed into one of the better young players around. Meanwhile, his family life prospered, as well. He's a husband to Kim and, just 14 weeks ago, became a father for the first time when David William Johnson was born Jan. 4.

Will, as his parents call him, was there to greet Dad by the 18th green Sunday, peacefully oblivious to the surrounding excitement.

"He's an amazing addition to the family," Zach said. "He wouldn't have cared if I shot 85 today."

But Zach didn't shoot 85. He shot 69, 3-under-par and tied for the best round of the day. It was enough to win the Masters by 2 strokes, claim his first green jacket, get asked the question, "Who are you?"

There are so many answers Johnson could have given. Son. Father. Golfer. Masters champion.

He sat up in his chair, looked straight ahead and pondered those three little words.