AUGUSTA, Ga. -- They get it. They understand. Brothers Smylie and Luckie Kaufman will meet folks who don't want to know about their burgeoning junior golf careers, don't care to ask about the thousands of dollars they raised for their Kids vs. Cancer organization. Not yet anyway. The first question, invariably and inevitably, is about their names. So, ask away. Smylie and Luckie don't mind. They are expecting it.

The answer is pretty simple, really. Carter Smylie Kaufman, 15, was named after their grandmother's cousin, Smylie Gebhart, while Connor Luckie Kaufman, 13, was named for their great-grandfather, Austin Luckie Shipman.

But these are more than just family hand-me-downs. Shakespeare once asked, "What's in a name?" For the Kaufman kids, the answer is everything. The names define the boys, their values, their optimism, their philosophies on life. 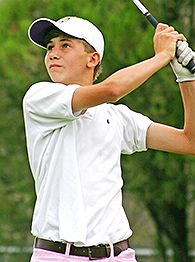 Wait a second. Teenagers? Philosophies on life? While most kids their age are defined by how much pizza, Nintendo Wii and instant messaging they can eat, play and do each day, Smylie and Luckie enjoy two things above all: Playing golf and helping people -- and not necessarily in that order.

Last year the boys came up with a plan. They wanted to raise money for children with cancer, a charitable cause that had become important to them when they saw so many others in their community of Birmingham, Ala., suffering from the disease.

"There were just a bunch of adults with cancer in our area and then kids started getting it," said the boys' mother, Pam. "Every time we went to church, we'd say names we were praying for. We got to be good friends with the kids. When that happened, [Smylie and Luckie] knew they had to do something. They wanted to do something more."

It was a cause that hit even closer to home, considering the Kaufmans had family members who were afflicted with cancer as well. Smylie's original namesake was an All-American defensive end at Georgia Tech before suffering an injury that left him a quadriplegic and was later a coach at Mississippi State. He died in 2001 from stomach cancer.

And so Smylie and Luckie decided to combine their two passions. They decided to play golf in order to help people.

The boys set up a marathon day of golf, sending out close to 1,000 letters asking for donations to the charity they had founded, Kids vs. Cancer, with all of the proceeds benefiting the American Cancer Society. (Just the thought of licking all those envelopes makes Luckie scrunch his nose in disgust. "It was so hard," he said.)

"The challenge became all these adults saying, 'Oh, I bet you couldn't play more than 50 holes,'" Pam recalls. "People were pushing them and challenging them to play as many holes as they could play."

They completed the journey some 12 hours later, playing a total of 100 holes in 100-plus degree heat. Not only did they play, they played well. As Luckie remembers it, he shot 73 over the opening 18 holes, while Smylie shot 69 -- a score he would equal on the next 18, too.

(That's hardly a rarity for the older brother, who last year at age 14 became one of the youngest players to qualify for U.S. Junior Amateur, even making it through medal play before being knocked out in the match-play portion of the prestigious event.)

But the only number that mattered that day was the final tally. Smylie and Luckie raised a grand total of $18,000 for pediatric cancer research. "We were just very excited to do something to help those kids with cancer," Luckie said.

Building on the momentum of last year's initial success, the Kaufmans have now gone statewide in their pursuit to raise more money for Kids vs. Cancer. They've recruited junior golfers in cities such as Mobile, Huntsville and Montgomery to join their charitable drive this summer. It might just be the beginning of something much bigger.

On Monday, Shoal Creek owner Hall Thompson took a group of junior golfers to a practice round at the Masters. Smylie was supposed to be part of that contingent but couldn't miss school. He was replaced by Luckie, who -- pardon the pun -- might have been the luckiest kid at Augusta National Golf Club this week.

"It's awesome," Luckie said, standing just outside the ropes aligning the opening hole. "Just a great golf course. ... We kind of saw Tiger [Woods], but we kept on going, kept on walking."

It remains the boys' biggest goal, coming back to Augusta National someday as top-ranked professionals, getting a chance to play in the Masters. Right now, though, they're content with playing golf and helping people.

For a pair of kids named Smylie and Luckie, it all makes sense.