Jan Stephenson, never a stranger to controversy during her 30-plus years in professional golf, says in an interview that the LPGA should regulate the number of foreign players on tour, must market its players' sex appeal and that commissioner Ty Votaw isn't the right man for the job. 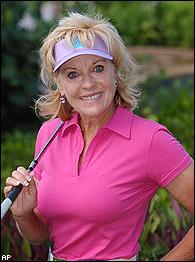 The interview, with Peter Kessler, appears in the November issue of Golf Magazine, which goes on sale Tuesday.

Stephenson is playing this week in the Champions Tour event in Hawaii against men -- admittedly as a "publicity stunt" to promote senior women's golf. She was the most visible star of the women's Tour two decades ago and has won 16 events and more than $3 million during her career.

In the first round in Hawaii Friday, Stephenson had one birdie and shot an 8-over-par 80.

In the course of answering Kessler's questions about the LPGA's marketing problems, Stephenson said: "This is probably going to get me in trouble, but the Asians are killing our tour. Absolutely killing it. Their lack of emotion, their refusal to speak English when they can speak English. They rarely speak.

"We have two-day pro-ams where people are paying a lot of money to play with us, and they say hello and goodbye. Our tour is predominantly international and the majority of them are Asian. They've taken it over."

Four of the top six players on the LPGA money list this week are Asian, including Se Ri Pak, Grace Park, Hee-Won Han and Candie Kung.

Votaw countered, telling USA Today: "Attendance, TV viewership, Web site traffic and purses are up. That does not suggest a tour that is being damaged by any one group."

South Korean native Grace Park, playing in the Samsung World
Championships in The Woodlands, Texas, took exception to the
comments.

"We have to promote sex appeal. It's a fact of life. The people who watch are predominantly male, and they won't keep watching if the girls aren't beautiful. That's not just the LPGA Tour, either. In Australia the highest-rated television event is the women's surf championship. Why is that?"

Later, she said: "Everyone wants to skirt it, but it's true. You have Tiger [Woods] and Phil and Adam Scott and Aaron Baddeley. They are gorgeous. Their clothes are beautiful; everything about them is exciting. So we have to catch up. The women are not the best players -- the men are. The women are not the best athletes -- the men are. Whether we like it or not, we have to promote sex, because sex sells. I think you have to shock."

Stephenson posed in a bathtub full of golf balls in a famous 1986 photo, and also posed for a revealing calendar.

In discussing Votaw, Stephenson said that he is doing the best he can, but that the commissioner should be a marketing person, not an attorney. She also voiced concerns over Votaw's current dating of LPGA Tour player Sophie Gustafson.

"It's hard to accept the timing. I'm concerned that their relationship affects the future of the LPGA and its ability to secure more sponsors," Stephenson said. "I'm in no position to judge anybody on what they do personally, but I could see sponsors saying, 'We don't think it's right for the commissioner to be sleeping with a player.' And if sponsors think it's wrong, then it's wrong."

Said Votaw in USA Today: "I've always considered Jan a great ambassador for women's golf. While I may not agree with some of the things in this interview, one magazine article is not going to change my opinion of Jan."

South African Bobby Lincoln, who shot a 71 in the opening round
of the Turtle Bay event, said he experienced what Stephenson
described about the Asian women with male players on the Asian
Tour.

"I agree with her," he said. "It's a funny tour because the
players play the round and off they go. No one ever goes to a
function. No one talks even though they can speak a bit of English.

"She's quite right, off they go and they don't care too much."