Jan Stephenson's heart is in the right place, if not her mouth. At age 51, she risked embarrassment by accepting a sponsor's exemption to play in the Turtle Bay Championship -- a Champions Tour event where she probably had no business competing -- in Hawaii over the weekend. 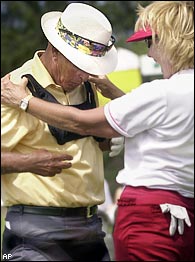 But Stephenson did it because she wants to promote women's golf. Any publicity is good publicity, she figured. Now hoping to give the Women's Senior Tour a boost, Stephenson wanted to show that older women can play, too.

It was pure coincidence that her comments regarding some of the ills of the women's game, including her opinion that Asians are "killing'' the LPGA Tour, appeared in Golf Magazine (the issue comes out Tuesday, but parts of it were obtained earlier) at the same time. No doubt Stephenson wishes she had not said it that way. Over the weekend, she apologized.

But if you read what she said carefully, if you throw out her contention that foreign players should be limited on the LPGA Tour, perhaps there is something to be learned from her words.

"This is probably going to get me in trouble, but the Asians are killing our tour. Absolutely killing it,'' she told the magazine. "Their lack of emotion, their refusal to speak English when they can speak English. They rarely speak.

"We have two-day pro-ams where people are paying a lot of money to play with us, and they say, 'Hello and goodbye.' Our tour is predominantly international and the majority of them are Asian. They've taken it over.''

Four of the top nine players on the LPGA money list this year are of Asian descent, including Se Ri Pak, Grace Park, Hee-Won Han and Candie Kung.

And that is the beauty of the LPGA Tour. It is a true international tour, a world tour where the best come to play. There is no other women's tour that comes close. Pak is a tribute to the tour, and so is Park. Both are champion players, while Han and Kung are emerging as stars. The LPGA should embrace them.

Stephenson's assertion that there should be quotas, or limits, on the number of foreign players, is absurd. A native Australian, Stephenson apparently has been living in the United States too long, feeling Americans are privileged.

In golf, the bottom line is what matters. No matter where you are from, no matter how you look or play, the score is the thing. And more and more, players from South Korea and Japan and Sweden and Australia have made their mark here.

But Stepheson does have a point when she says Asian players are doing themselves and the tour a disservice if they don't attempt to learn our culture and language. This is a touchy area, of course. It is no easy task learning a foreign language and then becoming comfortable enough to cut up with strangers.

Golf tournaments survive because of the pre-tournament pro-am, and that is especially true on the LPGA Tour. With limited television exposure and revenue, these glorified outings are what make the tour go. They pay the bills. Amateurs pay thousands of dollars to play in them, and if they are paired with a pro who cannot or will not converse with them, how much fun is that? How likely are they to come back?

Stephenson is not the only one who has voiced her displeasure with Asian golfers. Earlier this year, LPGA players met with commissioner Ty Votaw at the Wendy's Championship to express their concern about improper coaching by fathers. The charge was that a few Asian players were apparently being given advice by their parents while on the course. That, of course, is a golf no-no.

Earlier, at the Michelob Light Open in May, the subject of Asian players being more personable at pro-ams was broached. If these players become the stars of the tour, how are Americans ever going to embrace them if they aren't willing to be embraced?

So Stephenson was not the first to weigh in on this, just the loudest and the most insensitive. And in a huge forum.

With 18 Korean players on the LPGA Tour, several in the top 10, there are valid concerns. But doing away with those players is not a solution, as Stephenson later admitted.

Stephenson knows plenty about marketing. Long ago, she realized that in order to get attention, it would be necessary to do more than make birdies. Stephenson was ahead of her time, making provocative calendars and even posing in a bathtub full of golf balls, sans clothing.

But she was no Anna Kournikova. Stephenson could play. She won 16 times between 1976 and 1987, including three major championships, the last coming at the 1983 U.S. Women's Open. An injury to her finger suffered during a robbery attempt outside of the Miami Arena in the late 1980s affected her grip, her swing and her game, and Stephenson never won again.

She soldiered on, however, getting into golf course and club design. She was recognized during the LPGA's 50th anniversary in 2000 as one of the tour's top 50 players and teachers. Now she is hoping senior women's golf will take off.

Stephenson managed to break 80 in Hawaii on Sunday and tied for last place, finishing 34 strokes behind winner Hale Irwin. Only time will tell if she helped her cause or not.

Bob Harig covers golf for the St. Petersburg Times, and is a frequent contributor to ESPN.com. He can be reached at harig@sptimes.com