Tiger Woods and his Swedish girlfriend, Elin Nordegren, are
engaged. 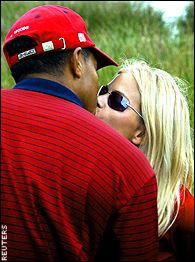 The golfer's agent, Mark Steinberg of IMG, confirmed the
couple's engagement to The Associated Press on Friday but declined
to give details.

"She called this morning and was incredibly happy,"
Nordegren's father, Thomas, told the Swedish newspaper Expressen.
"I only spoke shortly with them on the telephone but they were
happy and I congratulated them."

Thomas Nordegren, a correspondent for Swedish Radio in
Washington, could not immediately be reached for comment by the AP.

Ashley Cocks, a spokesman for the Shamwari Game Reserve in South
Africa, said in a statement that Woods proposed to Nordegren while
at the game park outside Port Elizabeth. Woods had been in
Fancourt, South Africa, for the Presidents Cup, which ended Sunday.

The proposal came during a walk at sunset Tuesday, he said,
adding that when the couple left Friday aboard a private jet,
Nordegren had a "huge diamond on her finger."

Nordegren's mother, Barbro Holmberg, who is Sweden's migration
minister, had no comment.

Woods, 27, and Nordegren, a 23-year-old model, have been dating
for nearly two years.

The South African Broadcasting Corp. also reported the
engagement, saying the couple spent the night under the stars in
sleeping bags and prepared their own food.

Woods and his entourage later left Port Elizabeth via Barbados
to the United States, SABC reported.

Expressen said the date and location of the wedding were not
disclosed, but that it was likely to take place in Sweden.

Woods' caddie, Steve Williams of New Zealand, got engaged the
weekend before the President's Cup.