After a year in which seven women competed in men's tournaments,
Bagger made history Thursday in the Women's Australian Open as the
first transsexual to play in a pro golf tournament. 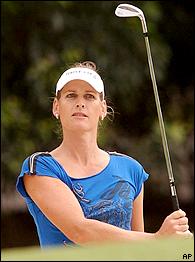 She struggled mightily on day one, though, shooting a 12-over 84 to drop 16
strokes behind the early leaders.

Bagger improved her second-round score Thursday by shooting an 8-under 80, missing the cut.

"I was pretty numb the first seven holes, I couldn't really
feel much below my shoulders," Bagger said.

"I didn't know where my swing was and it took a while to get
rid of the nerves. The greens were fast and it didn't help hitting
a few quite a few feet past."

Bagger was born a male in Copenhagen, Denmark, in 1966 and began
playing golf as an 8-year-old.

Golf World magazine ran a photo of Bagger as a 14-year-old boy
posing with Greg Norman at a golf clinic.

Bagger got down to a 4-handicap but stopped playing golf in 1992
to begin a transformation to a female with hormone therapy. Bagger
had the sex-change operation three years later, then resumed
playing in 1998.

For those concerned she has a physical advantage over the other
women in the field -- which includes Karrie Webb, Laura Davies and
Rachel Teske -- Bagger says they are misinformed.

"People aren't aware of what's involved with transsexualism,"
said Bagger, who is 5-foot-10 and 150 pounds. "People aren't aware
that there are certain physiological changes you go through with
hormone replacement therapy. We lose an amount of muscle mass and
overall strength as a result.

"After surgery, those effects are permanent and irreversible."

Another transsexual, Renee Richards, faced some opposition when
she played on the women's tennis tour in the 1970s.

Bagger, though, is being welcomed. Teske and Davies were among
players who supported her appearance at Concord Golf Club.

"She's a girl now, let her have a go," Davies said. "She's
not gaining any advantage from what I understand. She doesn't hit
the ball 350 yards. Why not give her a chance?"

This event might be the only chance Bagger gets.

The LPGA Tour, U.S. Golf Association and the Ladies European
Tour have policies that players must be female at birth.

The reason for that restriction was Charlotte Wood, a
transsexual who was 50 when she finished third in the 1987 U.S.
Senior Women's Amateur, and reached the semifinals of the U.S.
Women's Mid-Amateur.

The USGA put the "female at birth" clause in its entry forms
in 1989, while the LPGA Tour added the restriction in 1991.

"We live in interesting and ever-changing times," LPGA Tour
commissioner Ty Votaw said Wednesday. "How other organizations
deal with this, such as the IOC, is something we're looking at in
relation to this specific policy. But right now, our regulations
are they have to be female at birth."

The International Olympic Committee last week put off a decision
allowing transsexuals to compete in the Olympics, saying more time
was needed to consider all the medical issues.

The IOC medical commission proposed that athletes who have had
sex-change operations be eligible for the games after hormone
therapy and a two-year waiting period.

Women's Golf Australia, which runs the Women's Australian Open,
removed its "female at birth" clause in 1998 and gave Bagger an
exemption to the tournament.

"I think the publicity has been enormous," WGA president Sally
Hamersley said. "But quite honestly, I feel for the player. It's
going to be quite a weight for her to carry."

Votaw was at the Australian Ladies Masters last week, and met
Bagger when he stopped by Concord Golf Club to visit players.

"She seemed like a very nice person who is just trying to play
some golf," Votaw said. "I introduced myself to her and wished
her luck and told her to have fun."

Still, her presence has created a lot of attention.

"I can say I thought I'd never have to answer a question like
that," Webb said when asked how she felt about playing against a
transsexual. "It's up to the tournament, and they can choose to
use their sponsor's exemptions any way they want. I have not met
her, and it doesn't really bother me. But I'll be interested to see
how she does this week."

After Bagger resumed playing golf in 1998, she won the South
Australian State Championship for amateurs in 1999, 2001 and 2002,
and turned pro last summer by joining the Danish PGA.

Bagger says she is not a power player, and only hits the ball
about 240 yards off the tee.

All she wants this week is a chance.

"I want to play professional golf and have the same
opportunities as other women," she said.