NEW ORLEANS -- At the ninth hole, Vijay Singh thought he was
out of the HP Classic. At the 18th, he knew the tournament was his
for the taking.

Singh made a 25-foot birdie at No. 18 Monday to win the
rain-delayed tournament, denying Masters champion Phil Mickelson
his second straight victory and Joe Ogilvie his first title. 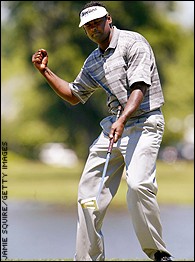 "I had patience out there," Singh said. "Like the front nine,
when nothing was happening. I was just 2 under and everybody was
way ahead. So I said, 'Just keep going, there is another nine to
go. Just play a solid nine and see what happens.' And the putts
started going in, and throwing in an eagle here and there, and all
of a sudden everything changed."

Singh overcame a six-shot deficit in the last eight holes, using
an eagle at No. 15 to shoot 29 on the back nine for a round of 63.

Ogilvie almost forced a playoff after Singh's putt, but his
blast out of the sand trap missed by an inch.

"I shot 32 on the front side, and I felt like I was in control
pretty much the whole way around," Ogilvie said. "Then I saw him
make an eagle on 15, then a birdie on 16. I don't know how long the
putt on 18 was, but what can you say. I mean, that's why he's
probably the best player in the world right now. He shot 29 on the
back side."

Singh finished at 266 and became the first three-time winner on
tour this season, taking $918,000 of the $5.1 million purse. He
also won last Monday at the rain-interrupted Houston Open. The
victory moved Singh to No. 1 on the money list with $4,267,899.

It was Singh's eighth come-from-behind win. He now has 18 career
victories, trailing only Tiger Woods (40), Mickelson (23) and Greg Norman (20) among active players on tour.

Mickelson, playing in his first tournament since winning The Masters, and Ogilvie were a stroke back at 267.

Hidemichi Tanaka was fourth at 269, while Charles Howell and
Justin Rose tied for fifth at 271. Three players, including former
champion K.J. Choi, were tied at seventh at 272.

Singh had five birdies and an eagle on the back nine. He caught
Ogilvie on the treacherous 15th, an island hole with sand traps on
two sides.

Mickelson was tied for second going into the final round.
Playing in the same group as Ogilvie, he made birdies at Nos. 15,
16, and 18 for a 4-under 68.

"I look in the middle part of my round, not birdieing 11, the
par-5, and missing short putts on 13 and 14 took some momentum
away," Mickelson said. "Although I was able to make a run near
the last four holes, I really needed something there in the middle
to get me up to the top of the leader board."

Ogilvie is playing on the PGA Tour for the second time after
spending last season on the Nationwide Tour. His best previous
finish on the PGA Tour was a tie for fourth at the 2000 Fed Ex
Classic.

Ogilvie's putter, which got him the lead earlier in the week,
wasn't as dependable on Monday. He missed birdie putts on 14 and
15.

That may have accounted for some of the pressure he felt,
Ogilvie said.