DUBLIN, Ohio -- There's a buzz at the Memorial Tournament
that cannot be ignored.

It has nothing to do with Tiger Woods and Vijay Singh, the top
two players in the World Ranking who played in the same
group for the first time this year.

It isn't about tournament host, Jack Nicklaus, winding down his
incomparable career. Not even the U.S. Open looming two weeks away
can generated this much attention.

This is a real buzz -- a swarm of cicadas that has returned to
Muirfield Village for the first time in 17 years, as big as Texas
grasshoppers and almost loud enough to drown out the Ohio State
marching band during opening ceremonies Wednesday.

"I thought we had some big bugs in Africa, but these things
..." Ernie Els said.

Joey Sindelar needed some debugging in Thursday's first round, and playing
partner Vijay Singh came through.

While waiting to hit on the No. 4 tee, Sindelar felt something
crawling around his neck.

His caddie, John Buchna, reached inside his shirt while standing
on his tiptoes but couldn't find what was bugging Sindelar.
Sindelar then took his shirttail out and tried to reach around
behind himself for relief.

They've bedeviled the players all week by
making crash landings during putts, all the while making a buzzing
noise that sounds like a typical practice day at the Indianapolis
500.

"Nobody could find it and it got under the tag in the back of
the shirt," Sindelar said. "It's funny, you could press and it
would squeak but it wouldn't come out." 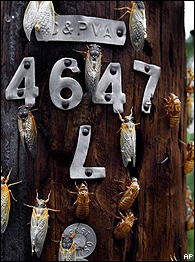 As Singh pulled the cicada out, it flew away. The gallery
responded with polite applause.

Kenny Perry was playing a pro-am round Tuesday when a cicada
flew under his arm during his backswing and zoomed past his face.

"I kind of flinched and I hit it way left," he said. "They
could actually play a role in this tournament."

Jay Haas is one of the few players in the field who were here in
1987 when the cicadas showed up. He was reminded of them during a
practice round, when he looked across from the fifth tee and saw
Singh on the third tee.

"He let go of the club because one hit him in the face on his
down swing," Haas said.

These are called 17-year cicadas because that's how long they
have been in the ground. They crawl out to mate and lay eggs in
tree branches. That constant screeching sound is the mating call
made by the males 24 hours a day. Along the tree-lined fairways of
Muirfield Village, the noise sounds like a police sirens in the
distance.

"We don't have bugs in Ireland," Padraig Harrington said. "It
was interesting the very first day to hear the noise. We weren't
quite sure what they were. I read about it in the paper, so I was
kind of expecting it. I actually wanted to see my first one. Once
I've seen a few, I've seen them all. That's enough."