LEMONT, Ill. -- Loren Roberts is doing his best to keep up with Jay Haas.

Roberts showed that Haas isn't the only one of the older set who
can hang with the youngsters, shooting a bogey-free 7-under 64
Thursday to take the first-round lead in the Western Open. 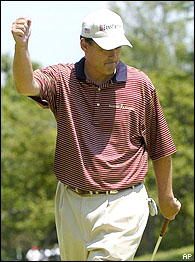 "Jay has just been playing consistently good all the time, and
that's something that I really want to try to shoot for," Roberts
said. "I would love to do that."

The 50-year-old Haas shared the lead after the first round of
the U.S. Open, and wound up tied for ninth. He also ranks ninth on
the PGA Tour in scoring average -- not bad for a guy who's eligible
for the Champions Tour.

"He's been motivating me a little bit," the 49-year-old
Roberts acknowledged. "I would love to do what Jay is doing. I
would love to play as long as I can out here and play the senior
majors. That would be my goal."

So far, he's holding his own. Roberts, a stroke ahead of 2000
winner Robert Allenby, has made the cut in all but one of his 12
starts this year, and has six top-20 finishes. His best finish was
a tie for 10th in the Nissan Open.

He was in contention for his first win in two years in the Buick
Classic three weeks ago, leading after three rounds. But the man
called the "Boss of the Moss" for his brilliant putting touch had
some rare struggles on the greens the final day, leading to a 78
that dropped him into a tie for 16th.

"I went home to practice my putting, spent a lot of time
working on my stroke," he said. "I made a little bit of an
adjustment and it paid off."

Roberts had 27 putts Thursday, and never three-putted. He set
the tone for his round on the first hole, when he ran a 35-foot
putt about 8 feet past the hole and made the comebacker to save
par.

He had four birdies on the front nine, including a 20-footer on
the par-4 No. 7, and three more on the back. He saved par again to
close his round, making a tough, uphill 10-footer on the slick 18th
green.

"That was another key for me," he said. "It would have really
left a bad taste in my mouth to bogey the last hole."

Instead, Roberts had the lead and headed into the clubhouse to
see if it would hold up. But except for Allenby, who had four
birdies on his last five holes, nobody could mount much of a
challenge. Of the 155-player field, only 51 finished under par.

British Open champ Ben Curtis leads a group three strokes back
at 67. Tiger Woods had another lackluster outing, three-putting for
a bogey on his final hole to finish at 70.

"I didn't play very well today," Woods said. "It's kind of
how it's been. I get off to a great start, kind of lose it in the
middle, then I get it back. I just can't put it all together."

Woods even broke out a new, graphite-shafted driver with a
larger head, hoping to improve on his dismal driving. He came into
the tournament ranked 160th in driving accuracy, hitting less than
58 percent of fairways.

But he was erratic, at best. He hit a booming shot down the left
side of the fifth fairway that carried about 30 yards past his
playing partners. But on the seventh and ninth holes, he drove deep
into the galleries -- left on the seventh, right on the ninth. He
wound up with par on all three holes.

Woods' biggest problem came on the par-4 eighth, when his tee
shot hit the right side of the fairway and hopped into a cluster of
bushes. He took a penalty drop, then put that shot into the bunker
on the left side of the hole.

He blasted onto the green, but the ball ran 15 feet past the
hole. Two putts later, he had a double-bogey that put him at 1 over
for the day.

"Just keep playing," Woods said when asked what he'll do
Friday. "Hopefully give myself more opportunities and make putts
when I do have those opportunities."