MIYAZAKI, Japan -- Tiger Woods slammed the PGA of
America on Wednesday for not appointing Mark O'Meara captain of the 2006
U.S. Ryder Cup team.

"I thought he should have been captain, because of the heritage of where he's from," a visibly agitated Woods said on the eve of the Dunlop Phoenix tournament. 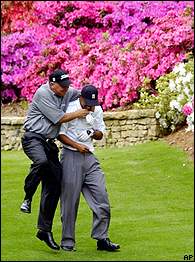 "He's Irish," Woods said, "so it would have been a perfect fit for Mark
O'Meara to be the Ryder Cup captain in Ireland, especially as he
goes to the K Club every summer to fish."

O'Meara was supposedly among the PGA's finalists for the job, but the PGA named Tom Lehman to the position two weeks ago. O'Meara owns 16 career PGA Tour victories, including two majors, as opposed to Lehman's five tour wins and one major.

"He's obviously very disappointed he didn't get it," said Woods, a longtime friend and neighbor of O'Meara.
"He feels this was probably his only chance, because of his
age. He'll be [51] by the time the next one comes around and more
than likely that one looks like it'll be [Paul Azinger's]."

Woods' comments leave little doubt that his
strained relationship with the PGA of America continues.

There is widespread speculation that O'Meara was snubbed because
he was one of the outspoken gang of four, along with Woods,
Phil Mickelson and David Duval, who in 1999 pressured the PGA
into donating a share of its Ryder Cup profits to a charity of
each player's choice.

"If that's the case, Phil, David and myself won't get [the
captaincy] either, because we were all in it together," Woods
said. "We all said the same things, that they were making $27
million at the time and we should be able to get a piece of that
and donate it to charity. If it wasn't for what we did in '99 [the PGA would still keep all the profits]."

Woods has a mediocre record in four Ryder Cups, going 7-11-2,
and there was a school of thought that O'Meara should have been
given the 2006 captaincy, if for no other reason than to get the
best out of Woods, a task that now falls to Lehman.

Woods said he didn't know if O'Meara would be interested in the role of assistant captain, if offered by Lehman.

Two weeks ago, Woods was more diplomatic in discussing the PGA's decision, describing Lehman's
appointment as a "good choice."